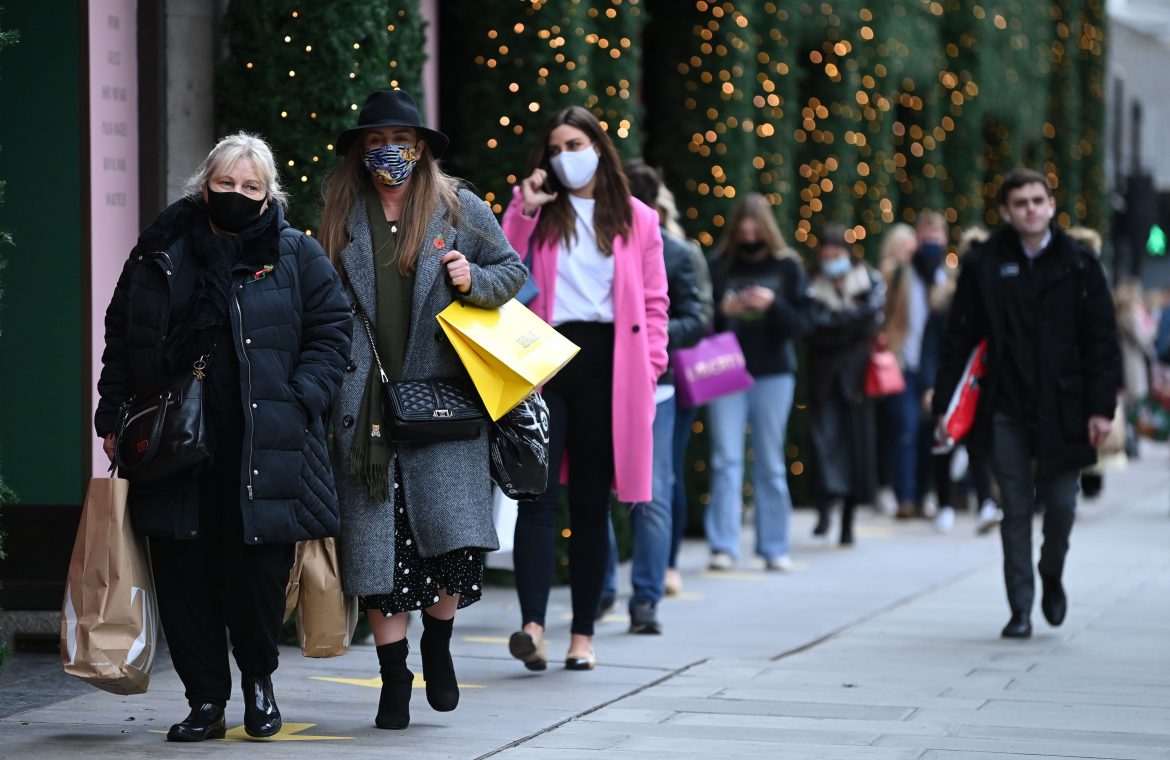 A Sage document, dated November 4, said: “If England returns to the same application of the tiering system in place before November 5, then transmission will return to the same rate of increase as today.”

The Hindu festival of lights is typically celebrated by socialising and exchanging gifts with friends and family, and lighting oil lamps or candles to symbolise a victory of light over darkness. Fireworks are also a major part of the celebrations.

But this year, the pandemic is upending some of the celebrations in India, particularly in New Delhi, the capital, which has seen a renewed spike in coronavirus infections in recent weeks, recording more new cases than any other Indian state.

Today, many temples across the country have streamed prayer sessions online to avoid large gatherings. In New Delhi, worried residents opted for low-key celebrations. Some even stayed home and didn’t visit friends or relatives.

In a bid to encourage people to stay home, New Delhi’s chief minister, Arvind Kejriwal, and some of his ministers held a prayer ceremony at a grand temple. The prayers were broadcast on TV and social media.

Mr Kejriwal said last week that the pandemic was spreading fast in the capital due to the rising air pollution. He appealed to people to not burst firecrackers on Diwali, in hopes of mitigating the harmful effect of toxic air on those who are more vulnerable during the pandemic. Firecrackers often cause spikes in New Delhi’s notoriously bad pollution.

The link between air pollution and worsening Covid-19 cases remains mostly theoretical at the moment. But several researchers have said that in addition to factors such as mask wearing, social distancing, population density and temperature, dirty air should also be considered a key element in coronavirus outbreaks.

India has confirmed 8.7 million cases of the coronavirus, including 129,000 deaths. While it is second in the world in total cases behind the US, daily infections have been on the decline since the middle of September.

The Scottish Government said there were 1,198 people in hospital with recently confirmed coronavirus and 92 people in intensive care as of today.

Of the newly confirmed cases, 400 were in the NHS Greater Glasgow and Clyde health board area, 218 in NHS Lanarkshire and 120 in NHS Lothian.

Earlier, Deputy First Minister John Swinney warned “more dramatic action” may be needed to curb the spread of the virus in parts of Scotland.

The Scottish Government has contacted local authorities in the Greater Glasgow and Lanarkshire regions about a potential move from Level 3 to Level 4 – the highest tier of restrictions.

“That is the issue that is being looked at over the weekend. We have to make sure we are taking all necessary measures.”

He added: “The Government would want to avoid that if we possibly can do, but it is certainly under active consideration given the prevalence of the virus and the fact that we are not seeing levels of the virus coming down as sharply and as firmly as we need.”

Saint Nicholas, the gift-bearing patron saint of children, has arrived in the Netherlands amid a partial coronavirus lockdown that forced the cancellation of celebrations in many towns and cities.

The Dutch celebrate what they call Sinterklaas on December 5 by giving gifts to children, but the saint arrives — legend has it — in the country weeks earlier in what is usually a nationwide party.

A nationally televised arrival celebration went ahead today without the usual crowds of thousands of children and their parents amid a partial lockdown in the Netherlands aimed at reining in coronavirus infections.

Other towns and cities were holding online events and at least one town organized a drive-through celebration where children could see Sinterklaas from the socially distanced safety of cars.

In neighboring Belgium, the saint’s official welcome in the port city of Antwerp was also banned, though the government said in a tongue-in-cheek letter that he wouldn’t have to quarantine after arriving in Belgium from Spain, where he lives, and would be able to walk rooftops to drop gifts into chimneys even during curfew hours.

( Two police officers walk past a giant statue of Saint Nicolas in front of the town hall of Sint-Niklaas, Belgium / AP )1605364061Here are the latest figures for Northern Ireland

A further 10 people with Covid-19 have died in Northern Ireland, the country’s Department of Health has said.

The death toll recorded by the department now stands at 846.

There were also another 511 confirmed cases of the virus recorded over the past 24 hours.

A total of 46,359 people have tested positive for Covid-19 in Northern Ireland since the pandemic began.

Here are the latest figures for the country, with the coronavirus death toll up by 20 and another 933 cases confirmed overnight:

1605361121After an eventful year, including his own Covid battle, Prince Charles is celebrating his birthday in style…

The Prince of Wales has been showered with well wishes as he celebrates his 72nd birthday.

Clarence House marked the milestone with an autumnal snap of Charles wearing a kilt.

The official Twitter and Instagram accounts for the prince and the Duchess of Cornwall shared the photo to mark the occasion, with the prince pictured beaming at the camera.

“Thank you for all the well wishes on The Prince of Wales’s 72nd Birthday!” the caption read.

A north London gym owner is facing a £67,000 fine from his local council after refusing to close during the second national lockdown.

Andreas Mishli, 34, said he finally shut his Zone Gym in Wood Green on Wednesday after police blocked customers from entering his premises.

Haringey Council, which has repeatedly issued fines against him, is now seeking to obtain a closure order through the courts which it intends to enforce.

1605358261JK Rowling: Releasing The Ickabog gave me a sense of purpose during lockdown

JK Rowling has said writing The Ickabog during the pandemic gave her a “sense of purpose” as she worried about the impact of coronavirus on families.

The Harry Potter author told BBC Radio 2 she was inspired to release the children’s book as she thought “how difficult it was going to be for families with children”.

She said it has been a “dreadful year for everyone”.

Discussing her book, she added: “It did give me a particular sense of purpose thinking, ‘This can help, this can do something’, because I’m married to a doctor, which makes you feel very inadequate when there’s a pandemic going on.

“Watching people in my family who are key workers go out there and face it all, simultaneously I was so proud of everyone but I was feeling anxious for them.”

Rowling said she was very aware of the challenges that some families were facing.

“I just know how difficult it was going to be for families with young children and particularly people who didn’t have gardens.

“It is really intense, looking after small children, if they can’t have play dates.

“I was just thinking, ‘This is going to be so tough for people’, and that’s when I thought I could do something.”

She added: “It gave me something under lockdown that I could never have had otherwise, it was so inspiring.”