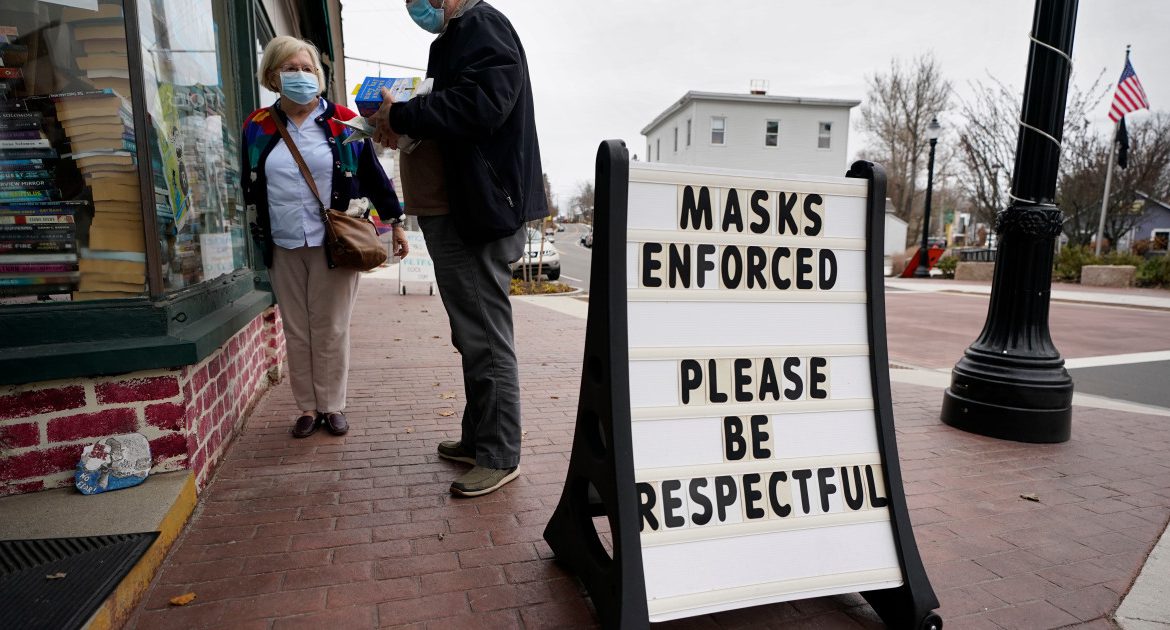 They warned that Republican President Donald Trump’s transition delay could further jeopardise the battle against the rampaging coronavirus, including vaccine distribution planning, and urged Congress to immediately pass bipartisan financial relief even before Biden, a Democrat, takes office on January 20.

Daily new infections in recent days have more than doubled single-day highs reported during the previous US peak in mid-July, and the number of COVID-19 patients in US hospitals also reached an all-time high, forcing a wave of new restrictions heading into the US holiday season.

“We are in a very dangerous period,” Dr Michael Osterholm, a member of Biden’s COVID-19 advisory board and director of the University of Minnesota’s Center for Infectious Disease Research and Policy, told NBC news on Sunday.

Unless action is taken now, “we’re going to see these numbers grow substantially,” Osterholm warned. “Our future’s in our hands.”

Spikes in cases have hit every US state. Several have implemented new mask mandates, imposed limits on gatherings and taken other public health measures despite earlier resistance as local healthcare systems reached a tipping point.

Washington State Governor Jay Inslee announced sweeping new restrictions on gatherings and businesses on Sunday, including a ban on indoor service at restaurants and bars, to combat a recent surge in COVID-19 cases in his state.

Michigan Governor Gretchen Whitmer was expected to make an announcement about restrictions in her state at 6pm ET (23:00 GMT), local media reported.

Basic public health measures such as covering the face to curb the virus’s spread have become politicised under Trump, who has eschewed mandates for masks even after contracting COVID-19 last month, while Biden has backed their widespread use.

A resident uses a swab to take a coronavirus test in the Stapleton neighbourhood of the Staten Island borough of New York City [Mary Altaffer/AP Photo]Still, some Republican governors in recent days have been forced to act, with North Dakota joining 35 other states over the weekend in mandating masks and Iowa this week requiring them in certain circumstances.

Forty US states have reported record increases in COVID-19 cases so far in November, while 20 saw a record rise in deaths and 26 reported record hospitalisations, according to a Reuters news agency tally.

Saturday’s 1,257 COVID-19 deaths marked the fifth consecutive day with more than 1,000 deaths in the US.

“This could be a first example of bipartisan action post-election,” Klain told NBC. He said Biden has spoken to congressional Democratic leaders, but not to Senate Republican leader Mitch McConnell, who has so far refused to publicly acknowledge Biden as president-elect.

Leaders in cities and states, especially those that weathered large outbreaks in the spring, defended renewed actions despite next week’s Thanksgiving holiday and Americans’ weariness over battling the disease.

Chicago Mayor Lori Lightfoot, whose stay-at-home restrictions begin on Monday, said as many as 1,000 city residents were projected to die without further steps.

“Standing by and watching that kind of devastation is just not something that I could abide. We are at a critical inflecting point,” she told MSNBC.

Klain said there had been no formal contact between Biden’s advisory panel and the White House Coronavirus Task Force, which requires transition authorisation from the General Services Administration.

“Of course it would be better if we could start working with them,” said Dr Anthony Fauci, head of the National Institute of Allergy and Infectious Diseases who has been through multiple presidential transitions during 36 years of government service.

“It’s really important in the smooth handing over of the information,” he said, likening the process to runners passing on the baton in a relay race. “You don’t want to stop and then give it to somebody,” he told CNN. “You want to just essentially keep going.”

Pfizer’s announcement that preliminary data indicate its vaccine is 90 percent effective lifted financial markets last week and gave people worldwide hope that an end to the pandemic will be coming.

Klain said Biden’s experts also need a detailed understanding of distribution plans being finalised by the Department of Health and Human Services and the Pentagon. In some ways, that’s the more critical issue, he said.

“We need to be talking to them as quickly as possible,” Klain said. “It’s great to have a vaccine, but vaccines don’t save lives: vaccinations save lives. And that means you’ve got to get that vaccine into people’s arms all over this country. It’s a giant logistical project.”

Former US Surgeon General Dr Vivek Murthy, head of Biden’s COVID-19 team, told Fox News the coronavirus surge was “deeply alarming” but that a national lockdown was “a measure of last resort”.

“The better way to think about these safety restrictions is more a dial that we turn up and down depending on severity” in a given area, he said.