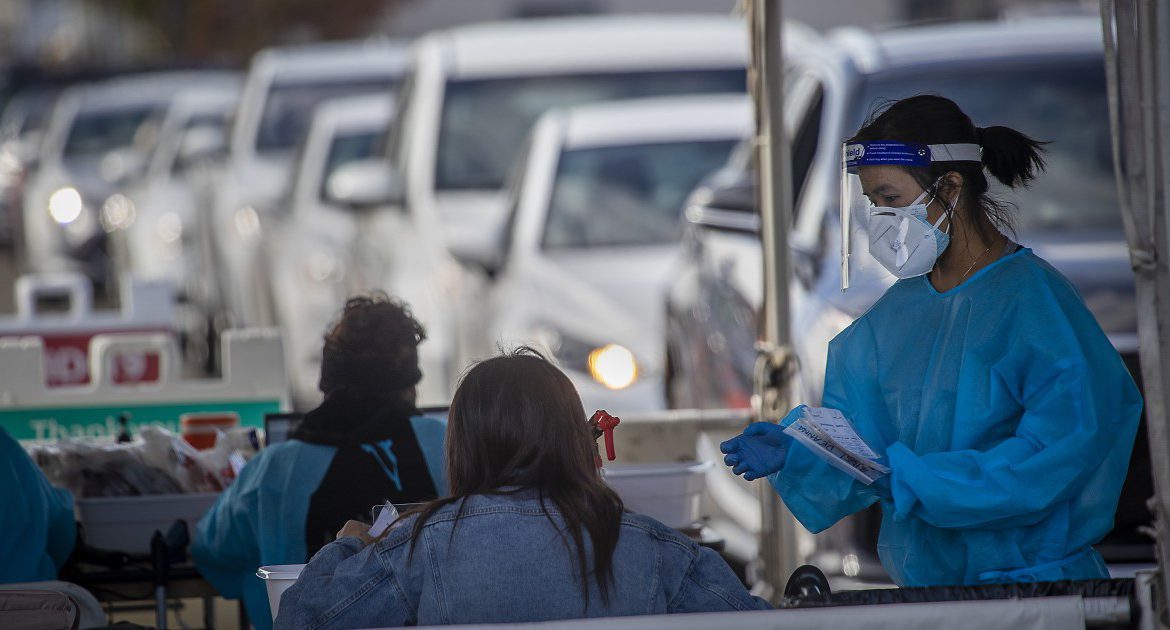 In a sign of the continued political polarization surrounding COVID-19, officials in Orange County are expressing frustration following Gov. Gavin Newsom’s decision to move the region into the most restrictive reopening tier amid a dangerous new surge in coronavirus infections statewide.

Conservative county leaders have long been at odds with the Democratic governor over the restrictions imposed on businesses, public spaces and activities, but it now appears that clash will stretch into the holiday season as California enters what could be its most challenging chapter of the pandemic.

The state has rolled back reopenings in much of California as cases have climbed. Some areas are considering even more local restrictions — including hard-hit Los Angeles County, where officials imposed new restrictions Tuesday and warned of a curfew and new stay-at-home order if conditions continue to deteriorate — while others, including Bay Area counties like San Francisco, have voluntarily added restrictions that go beyond the state requirements as a protective measure.

But Orange County leaders on Tuesday argued the state has gone too far.

Though they reiterated the importance of residents taking steps to protect themselves and their loved ones from the virus, some county supervisors took Newsom and his administration to task for the reclassification.

Board Chairwoman Michelle Steel, a Republican who was recently elected to Congress, called the decision a “unilateral move” that she thinks “is troubling and harmful to Orange County families who need to put food on the table, to small businesses struggling to stay open and to the mental health of our community.”

“Instead of combatting COVID-19 in a thoughtful manner, this one-size fits-all approach threatens the livelihoods of our residents,” she said in a statement.

Monday’s dramatic announcement saw Orange County, along with 27 other counties in the state, regress to the purple tier — the most stringent of the four color-coded categories in the state’s coronavirus reopening system.

As a result, many businesses and other public facilities will have to suspend or severely limit indoor operations.

The widespread reassignment, which Newsom likened to pulling an emergency brake, comes as California grapples with its most significant coronavirus surge to date.

Weekly infections across the state are now almost 150% worse than a month ago, rising from about 22,600 to 56,000 for the seven-day period that ended Sunday, according to a Times analysis. California reported 13,412 new coronavirus cases Monday, a single-day record. Health experts have largely backed the state’s approach, saying restrictions are needed to help slow the skyrocketing infection rate.

Given the explosion in the number of cases, this week’s tier reassignments were accelerated. The system is based on new coronavirus cases and testing positivity rates, and previously, a county’s metrics had to fall within the threshold of a more restrictive tier for two consecutive weeks before it fell back. The state now says only one week’s worth of data is needed.

Orange County had for weeks been in the second-most severe — or red — category. However, its latest adjusted daily case rate per 100,000 residents was 10.8, high enough to land in the purple range, indicating widespread transmission of the disease.

Even with the backsliding, that adjusted rate is the third-lowest in Southern California, trailing only Santa Barbara County and, narrowly, San Diego County, according to state data.

To some in Orange County, though, the abrupt shift — aside from causing undue confusion and consternation for residents and businesses — is the latest example of a state pandemic response that too often has been top-down, uneven and overbroad.

“We’re hearing a bit of hopelessness that is out there in the community as we move back into purple, and that hopelessness, I think, is not there just because, ‘Oh, gosh, we’re doing more clampdowns,’ but because we’re seeing no end in sight,” Supervisor Don Wagner said during Tuesday’s board meeting.

“And by that I mean every time this governor has come up with some sort of a plan for dealing with coronavirus, it ends up changing — changing for the worse.”

Others took issue with the tiered system itself, saying that the state should take other metrics — such as hospitalization numbers — into consideration.

“Our healthcare system is very prepared,” Supervisor Lisa Bartlett said. “So while we want to balance that with health and safety, I think reopening our economy to the greatest extent possible, and we’ve proven that we can safely do that, is really the proper way to go.”

Orange County has tussled with the governor over coronavirus-related restrictions before, including when the state briefly closed local beaches. Some cities have also drawn headlines for their residents’ reluctance to wear masks in public settings, even though local leaders have urged them to do so.

However, officials pointed out that the county’s case rates and hospitalization numbers remain in better shape than some of its Southern California neighbors.

“What we’ve been doing and what this board has been doing and what Dr. [Clayton] Chau and, more importantly, the people of Orange County have been doing to direct the resources where they need to go and to protect themselves is working,” Wagner said. “That’s the model — not the hopelessness, the despair, the shut everything down and hope for the best that the governor is foisting on us. We tried that before. This is proof it doesn’t work.”

The county isn’t alone in expressing concerns about, or antipathy toward, state restrictions. More than 100 elected officials, business owners and residents rallied near San Diego’s waterfront Monday, demanding the county — also in the purple tier — let restaurants, churches and other small businesses reopen.

“This is not a choice between opening up businesses or saving lives,” San Diego County Supervisor Jim Desmond said. “We can do both.”

County officials still stressed that it’s up to residents and businesses to do their part to help stem the spread of the virus.

That’s especially true when just around the corner are the holidays — a time when residents might be tempted to gather with family and friends without taking precautions.

California has generally banned large gatherings, though brief, small ones of no more than three households may be held, provided they take place outdoors and attendees physically distance and wear face coverings.

Chau, director of the OC Health Care Agency and the county’s health officer, said he hopes residents take the guidance to heart.

“I know this is hard. We’re all in this together,” he said. “And I would strongly recommend [to] our residents that we can get through this very quickly if we follow those.”