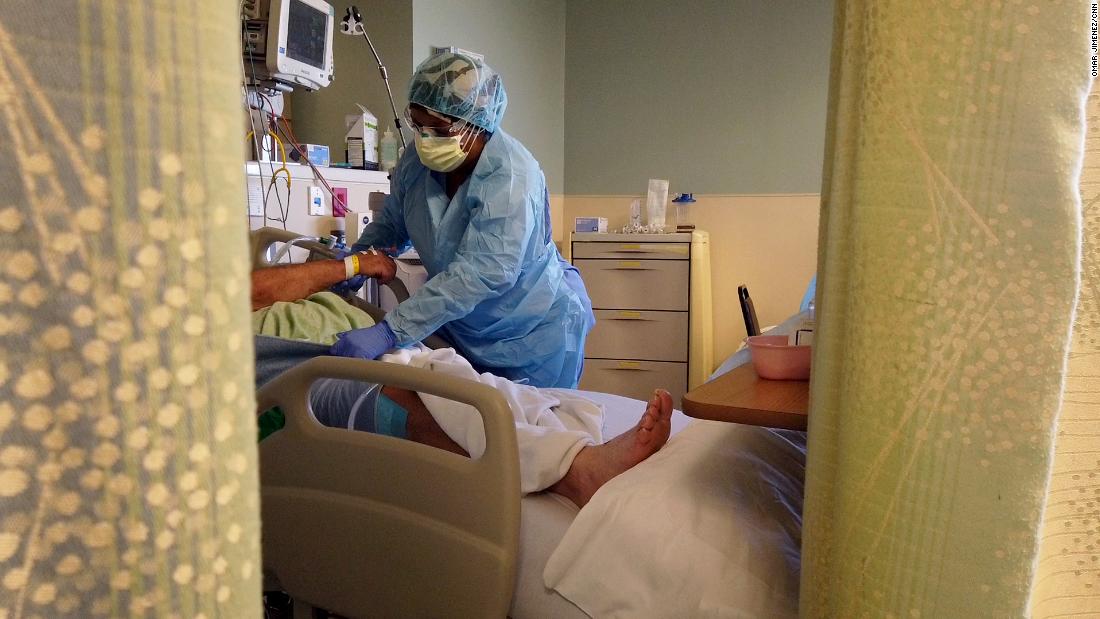 The acute care nurse practitioner in Odessa, Texas, was reflecting on the emotional arc of the coronavirus pandemic, one that began with a sense of unity but has unraveled into exasperation.

“At first it was, ‘Thank you so much, you’re frontline, we appreciate what you’re doing,'” she said. “And now, I mean, I’m getting threats.”

Mourning is often on the receiving end of frustrated phone calls by patients’ family members who aren’t allowed to visit the hospital or feel like she’s not doing enough.

“I think that it’s sad,” Mourning said. “We’re trying to help, and we’re trying to do the greater good. And I want people to know that.”

It was a stunning plea for civility as the Covid-19 spread continues to worsen.

‘Busting out of the seams’

While scenes from New York City and other major cities dominated the coronavirus narrative earlier this year, the pandemic has now crept into smaller Texas communities, overwhelming hospitals in even the most unexpected places — from the sparsely populated oil fields of West Texas to the desert-mountain region of El Paso.

“There was only a few times in the summer where we were really pushed to the extreme,” said Mourning, recalling the surge from July and August. “But now for the last few weeks, we’re…busting out of the seams.”

At the Odessa Regional Medical Center, where Mourning works, a once neonatal intensive care unit has turned into a Covid-19 ICU for adults. This week the hospital is treating 28 Covid-19 patients as of Thursday. But more significantly, the center maxed out its capacity in the ICU and in a separate medical surge area for Covid-19 patients as well. The hospital had to open an “overflow” unit earlier this week in a separate building just to keep up.

“The only space that’s not full right now is the hallways,” said Dr. Rohith Saravanan, the hospital’s chief medical officer.

“For every patient that you see here, there’s several more that are positive outside the hospital that could have used some care, but there’s no space,” he said. “The most critical people get admitted and the rest get sent home.”

Some of those patients go home with oxygen — something the hospital doesn’t normally do, Saravanan said.

The positivity rate of those tested by the city’s two hospitals fluctuates between 35% and 40%, according to Saravanan. Ector County, where Odessa is located, hasn’t been able to update its Covid-19 statistics online in almost a week because its data entry team is in isolation after exposure, according to the county’s health department.

As of Thursday, the two hospitals in Odessa had close to 130 Covid-19 patients — nearly double the roughly 70 who were hospitalized here at the height of the crisis this summer.

Statewide, the hospitalizations haven’t reached the levels from this summer, but they are steadily increasing in that direction. At one point in late July, nearly 11,000 people were hospitalized with Covid-19 in Texas. That number dropped to around 3,000 in September and is back to nearly 8,000 this week.

The United States is now averaging 72,120 hospitalizations due to Covid-19 over the last seven days, up nearly 20% from just last week. The metric has never been higher.

The Odessa hospitals, Saravanan said, are working with city officials to request a mobile morgue. And he said there are discussions of setting up a tent to treat patients near the airport between Odessa and Midland.

The state has sent additional medical personnel to Odessa and helped expand the hospital’s surge capacity. But Saravanan said he’s still worried about what is to come.

“We don’t have good control of it,” he said. “It’s definitely something that horrifies us when we think about where this community is going.”

“The scary word is ‘positive'”

The pandemic is also causing alarm in the agricultural community of Lamesa, Texas — a small town about 80 miles northeast of Odessa. Home to a little more than 9,000 people, Lamesa is known for its annual Chicken Fried Steak Festival, and its high school sports teams are known as the Golden Tornadoes.

Lamesa has all the charm of a small West Texas town, but inside the walls of its hospital are the same scenes unfolding across the nation, even if on a smaller scale. Medical Arts Hospital began preparing for one or two Covid-19 patients about a year ago. Now, the 21-bed facility has a full unit of 10 beds for patients with the virus — taking up about half the building’s total capacity. On Thursday morning, the hospital had to add two more Covid-19 patients in an overflow space.

Dr. Anthony Gibson, the hospital’s emergency room director, said smaller communities have the advantage of time. They’re experiencing this wave nearly a year into the pandemic, so they benefit from the treatment and therapies that have already been discovered.

“Because there’s just so many (Covid-19 patients), it takes a lot of the resources away from the other issues that people have,” he said, naming common concerns like strokes, cardiovascular events and seasonal illnesses. “We’re approaching winter, and this is the time of the year where the hospitals get busy.”

Shelley Barron, a music director at her small church in Lamesa, said she started feeling feverish at bell choir practice in September. Just days later, she was admitted to the hospital with Covid-19 and double pneumonia. Barron, 70, would spend close to 10 days at Medical Arts and another three days at a hospital in Lubbock during two different stays.

Barron called the ordeal an “extremely humbling” experience. She urges others to take Covid-19 seriously.

“The scary word is ‘positive,'” she said, adding that six people in her bell choir and music team have tested positive. Overall, her church has seen two deaths. “This stuff is real. It’s scary.”

‘We’re getting patients from everywhere’

Lamesa is about a one-hour drive south of Lubbock, a larger community that’s seen an influx of state resources to tamp down a surge in cases and hospitalizations in recent weeks. Overall, the state has sent more than 700 medical personnel to the Texas Panhandle and South Plains region, as well as 7.4 million masks, 3.9 million gloves and over 1 million gowns and coveralls, according to Gov. Greg Abbott’s office.

More than 340 miles to the west, El Paso is still grappling with a weeks-long surge, where roughly 1 in 25 people have the virus. The state set up tents outside the major hospital and opened up a makeshift medical unit at the convention center. The medical examiner’s office is surrounded by mobile morgues, and local inmates are paid to help transfer the bodies.

Wanda Helgesen is executive director of Border Regional Advisory Council and helps coordinate resources for the Covid-19 response effort in the El Paso region. She said area hospitals have added 600 beds and flown more than 80 ICU patients to other Texas communities.

“Never think it can’t happen to you,” she said. “Ours happened very quickly. We had a very fast upswing, and so even though we were planning, I don’t think we were planning on it happening it that fast.”

It’s a situation that medical professionals in other communities are hoping to avoid. Odessa and Midland are two of the largest cities in the expansive West Texas region, and their hospitals are taking in Covid-19 patients from far beyond their county borders.

“We’re getting patients from everywhere,” said Dr. Saravanan, the chief medical officer at Odessa Regional Medical Center. That includes patients from the Texas-Mexico border and from New Mexico.

Mourning, the nurse practitioner, said that all she and her colleagues want to do is take care of their community, but they’re desperate for people to return the favor.

“People aren’t taking the precautions that they need. Yes, we’re frontline here in the hospital, but the real frontline is on the streets, in the grocery stores. Wash your hands. Wear your masks. Stay away,” she said. “The little bit of time and little bit of effort it takes outside of here is worth it, because once you’re here…wearing a mask is better than having a tube down your throat. I promise.”