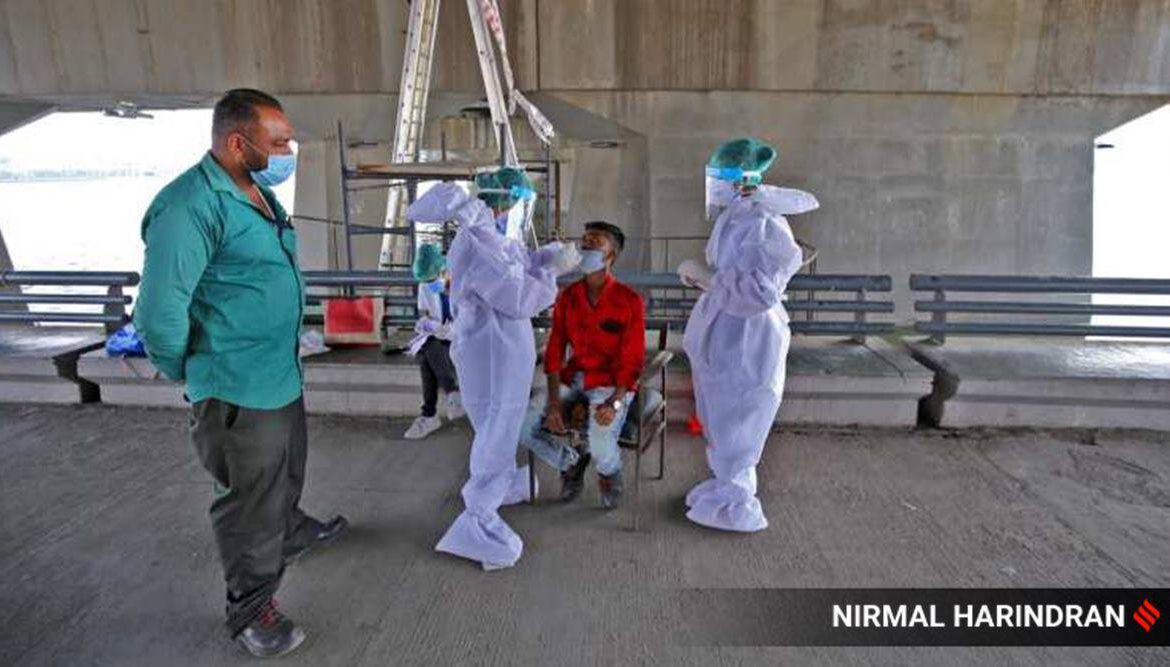 Ahmedabad city will go under “complete curfew” from Friday night till Monday morning with only shops selling milk and medicines remaining open, in view of the steep surge in Covid-19 cases after Diwali, and night curfew will continue thereafter.

The decision came hours after Additional Chief Secretary, forest and environment Rajiv Kumar Gupta, who is in charge of the Covid situation in Ahmedabad Municipal Corporation (AMC), announced an indefinite night curfew from Friday.

The decision to impose the night curfew from 9 pm to 6 am from Friday was taken in a review meeting chaired by Chief Minister Vijay Rupani and attended by Deputy Chief Minister Nitin Patel and senior officials of the AMC on Thursday afternoon. (Express photo by Nirmal Harindran)

Gupta said, “After reviewing corona situation late night, it has been decided that ‘complete curfew’ shall be imposed from Friday 9 pm till Monday 6 am in Ahmedabad city. During this period, only shops selling milk and medicines shall be permitted to remain open.”

The decision to impose the night curfew from 9 pm to 6 am from Friday was taken in a review meeting chaired by Chief Minister Vijay Rupani and attended by Deputy Chief Minister Nitin Patel and senior officials of the AMC on Thursday afternoon. The situation was reviewed again late evening. Gupta, in a late night post on Twitter emphasised that after the total curfew lifts Monday 6 am, the city would go under the indefinite night curfew Monday night onward.

As on Thursday morning, the city had 2,845 active cases. Of these, majority is from the western parts of the city. The highest (477) from the North West zone alone followed by South west zone (452), and west zone (446) while the least (274) from the central zone.

“Keeping in view the present situation, the state government has decided to impose a curfew in Ahmedabad city from November 20 from 9 pm till 6 am till the infection rate in the city is under control,” Gupta stated in a video message. He also attributed the surge in cases to a huge rush at markets and public places during this festive season and the setting in of winter.

People wait in queues for their thermal scanning before entering a market in Gujarat, Nov. 12, 2020. (PTI Photo/File)

It was also decided to add 1,300 more Covid beds to the existing capacity in the government and private hospitals in the city, taking the total number of beds for Covid care in the city to 8,800. Government hospitals will get an additional 900 beds, while private ones will get 400. Ahmedabad city reported three deaths and 230 fresh cases of coronavirus on Thursday, out of total 1,340 cases and seven deaths in the state.

The state government also sanctioned 300 doctors and 300 medical students for Ahmedabad city on Thursday. For areas around Ahmedabad, such as Sabarmati, Chandkehda and Motera, 100 additional beds are being reserved for Covid patients at Gandhinagar Civil Hospital.

According to the AMC, as on Thursday, 2,237 beds were vacabt in government hospitals and 400 in private hospitals. For additional support services, the 108 ambulance vehicles too were increased from 20 to 40.

Continuing its sealing drive launched on Wednesday, AMC’s solid waste management department sealed the Royal Enfield showroom on the Sarkhej-Gandhinagar Highway in the Sarkhej ward for violating Covid guidelines. On Wednesday, several popular eateries on the SG Highway under Jodhpur ward were sealed.

For all the latest Ahmedabad News, download Indian Express App.

Don't Miss it Two US senators have clashed over the wearing of face masks in the chamber – BBC News
Up Next Four children under 10 in hospital with coronavirus, as Victoria records 278 new cases | ABC News