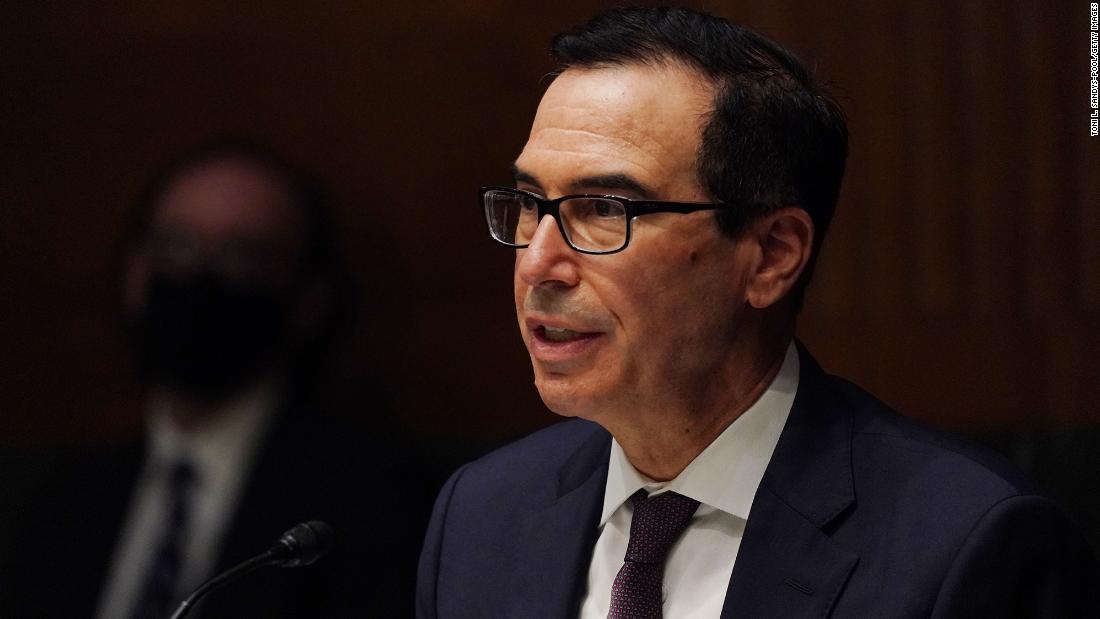 In a letter sent Thursday to Fed Chairman Jerome Powell, Mnuchin asked the central bank to return some $455 billion in unused funding for programs set to expire December 31. He added that Congress would then be able to re-appropriate the money for other purposes.

The decision would force several programs to end that were intended to help businesses that have been struggling as the pandemic wreaks havoc on the US economy. The money was set aside in March as part of the CARES Act, a $2 trillion stimulus package meant to prop up the ailing economy by providing financial assistance and loans for distressed companies, among other measures.

The move was immediately met with backlash from Corporate America: The US Chamber of Commerce blasted the decision as one that “closes the door on important liquidity options for businesses at a time when they need them most,” adding that it “unnecessarily ties the hands of the incoming administration.”

The decision also puts the Treasury Department squarely at odds with the Fed. The central bank, a typically apolitical institution, swiftly responded to Mnuchin’s letter in a statement saying that it “would prefer that the full suite of emergency facilities established during the coronavirus pandemic continue to serve their important role as a backstop for our still-strained and vulnerable economy.”

Mnuchin wrote in his letter that in the “unlikely event” that the programs need to be re-established in the future, the Fed can request approval from the Treasury secretary again.

In a statement, US Chamber of Commerce Executive Vice President and Chief Policy Officer Neil Bradley criticized the decision and said that businesses “need the government’s full support by providing the resources necessary for broad-based economic recovery.”

Bradley singled out the Main Street Lending program, which was designed to support small and medium-sized businesses and nonprofit organizations that were in sound financial condition before the Covid-19 pandemic but now lack access to credit on reasonable terms.

Bradley said the Chamber urges “these programs be extended for the foreseeable future and call[s] on Congress to pass additional pandemic relief targeted at the American businesses, workers and industries that continue to suffer.”

Mnuchin’s move received support, though, among political allies. Republican Sen. Mike Crapo, chairman of the US Senate Committee on Banking, lauded the decision.

Returning the unused money “allows those funds to be re-appropriated for other uses, such as reducing our national debt, or providing additional targeted relief to sectors of the economy most in need,” Crapo said in a statement.

“This appears to be a political move by Team Trump to limit what President-Elect Joe Biden can do next year to boost the economy, especially if Congress fails to pass a big stimulus,” he wrote in a research note Thursday. He added, though, that there may be a way for the programs to continue.

“Treasury can refuse to commit new capital, but we don’t see how it can recall capital already committed,” Seiberg wrote. “That suggests these programs will remain open beyond Dec. 31, which is positive for cash-strapped small businesses and local governments.”

Meanwhile, US lawmakers have failed to reach an agreement on a second economic stimulus package, despite months of negotiations. Talks between Mnuchin and House Speaker Nancy Pelosi sputtered before the election earlier this month.

Lawmakers on Capitol Hill have become less confident that any stimulus deal can be reached during the lame duck session.

Democrats — including President-elect Joe Biden — have urged Senate Republicans to pass House Democrats’ Heroes Act, which totals more than $2 trillion. But Republicans have made it clear they aren’t willing to spend much north of $1 trillion.

– Matt Egan contributed to this report.

Don't Miss it Hawaii opens pre-travel COVID-19 testing program to Canadians
Up Next Vaccine against COVID-19: When will we bring the pandemic under control? | To the Point