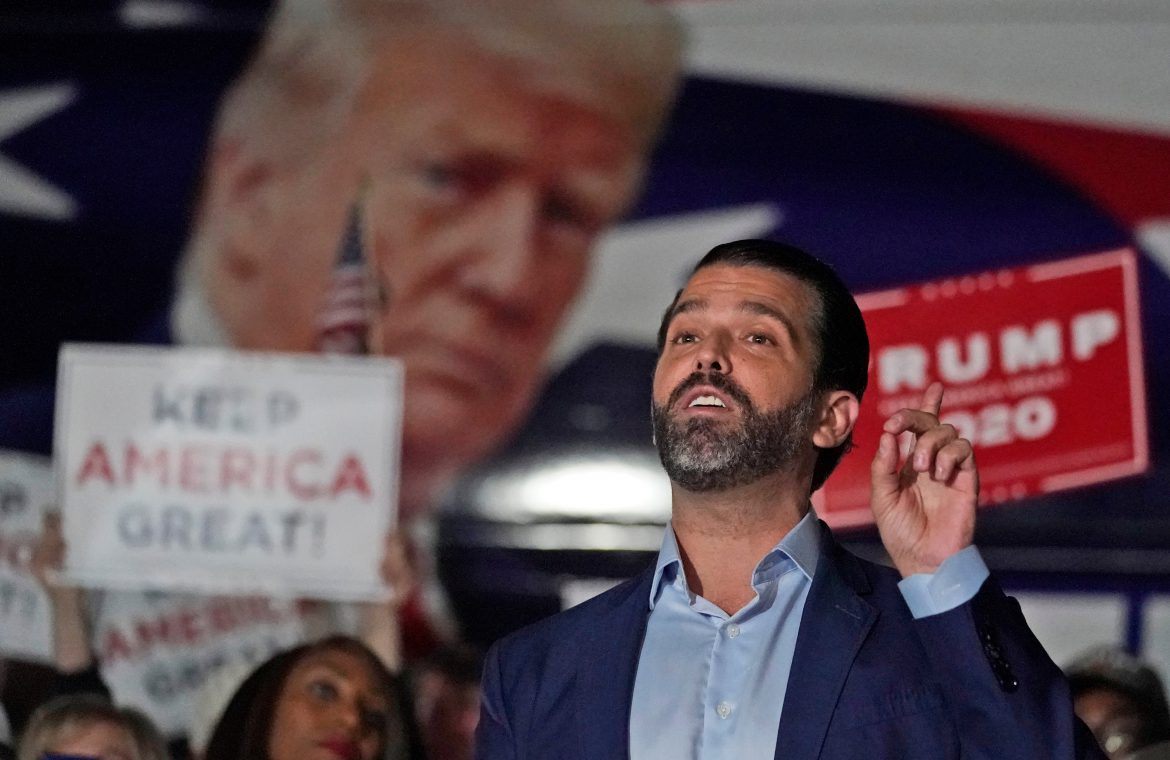 The 42-year-old, who has emerged as one of his father’s most strident and aggressive champions and a potential candidate for the 2024 election, tested positive earlier this week, according to his spokesperson.

“Don tested positive at the start of the week and has been quarantining out at his cabin since the result,” his spokesperson told reporters.

“He’s been completely asymptomatic so far and is following medically recommended Covid guidelines.”

Like his father, who tested positive for the coronavirus shortly before the election, Mr Trump Jr has appeared to adopt a very casual attitude towards issues such as the wearing of a face mask to counter the spread of the disease.

In May, for instance, he mocked Democratic presidential candidate Joe Biden for his insistence on wearing one, saying it acted as “a muzzle so Joe can’t sniff anyone”.

When his father debated Mr Biden in their first encounter at the end of September, in Ohio, the president’s eldest son was among a number of members of the Trump entourage who took their masks off to listen to the debate, despite reportedly being asked by a medical official to wear one.

During the debate, Mr Trump made a point of saying that he didn’t wear a mask as much as Mr Biden. “I don’t wear a mask like him. Every time you see him, he’s got a mask. He could be speaking 200 feet away from him, and he shows up with the biggest mask I’ve ever seen,” the president said.

Shortly after returning to Washington DC, it was announced Mr Trump and the first lady, Melania Trump, had been infected with the virus, after travelling back with White House adviser Hope Hicks, who had also tested positive.

Mr Trump Jr has similarly echoed his father when playing down the seriousness of the pandemic, which has now killed more than 254,000 Americans and infected 11.8m.

For instance, appearing last month on Fox News as the number of Covid deaths in the country stood at 1,000 a day, he claimed mortalities had dwindled to “almost nothing”. He also attacked independent and government medical experts as morons.

“I went through the CDC data because I kept hearing about new infections, but I was like, ‘Well, why aren’t they talking about deaths’,” he said, referring to the Centres for Disease Control and Prevention, the nation’s preeminent healthcare institution.

“Oh, oh, because the number is almost nothing. Because we’ve gotten control of this thing, we understand how it works. They have the therapeutics to be able to deal with this.”

He added: “It’s gone to almost nothing.”

Bloomberg News, which was the first to report Mr Trump Jr’s infection, pointed out he was among dozens of people associated with the president who have been infected by the virus.

On Friday, Rudy Giuliani’s son Andrew Giuliani, who is a White House aide, said on Twitter he had tested positive. An aide to vice president Mike Pence, Hannah McInnis, is said to have tested positive earlier this month.