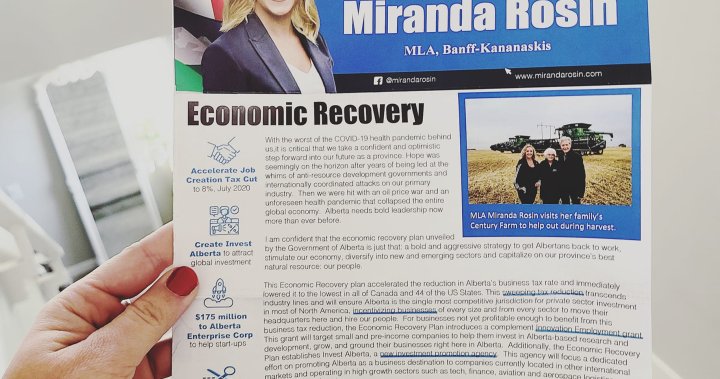 A flyer sent out by United Conservative Party MLA Miranda Rosin is not being received warmly by some residents in her riding of Banff-Kananaskis.

The first line of the mailer states, “With the worst of the COVID-19 health pandemic behind us” and continues on to encourage Albertans to be optimistic about the future of the province’s economy.

This comes as Alberta Health announced a record number of new COVID cases on Saturday at 1,336, bringing the total number of active cases in the province to 11,274.

Several people have taken to social media to share their concerns about the flyer, questioning why the mailer from the UCP MLA is contradicting what Alberta’s Chief Medical Officer of Health Dr. Deena Hinshaw and Premier Jason Kenney have been saying for weeks about the danger of the virus.

In a statement on her Facebook page, Rosin said she’s heard feedback on the flyer and that it was printed before the latest spike in numbers.

“Printing and mailing timelines are often rather slow,” Rosin said. “This newsletter was sent to print in early fall when our active cases were below 2,000, but was only delivered to mailboxes this week. There is no denying that Alberta’s case count is now sharply rising, especially in communities such as Banff.”

A UCP caucus spokesperson said the flyer was drawn up in September and sent out for delivery in October before showing up in mailboxes on Thursday, Nov. 19.

“This document misunderstood the significance of the pandemic and how it would grow in the fall when people go indoors,” Guichon said. “I think it’s possible that the MLA was trying to encourage people, but that is a rookie error.”

Guichon added that she hopes Rosin learns from the error.

“Everybody makes mistakes when they’re young and better oversight should take place for this young MLA,” she said. “I applaud young women who go into politics.”

Lori Williams, an associate professor at Mount Royal University, said not stopping the flyer from being delivered was an error in judgment.

“If anybody’s even casually watching, they know that things have gotten pretty serious very recently,” Williams said. “Knowing what’s in that flyer, the prudent thing to do would be not to send it out, because it doesn’t help anyone; not the people that are receiving it, not the MLA who’s sending it and not the government.”

The UCP Caucus did not elaborate when asked if the message from Alberta’s health professionals on the second wave was missed in the writing of the flyer.

When asked to comment, the premier’s office said, “The Government has been clear about the serious nature of the pandemic, and how all Albertans need [to] take action to control the spread while we wait for widespread vaccine distribution and immunization.”