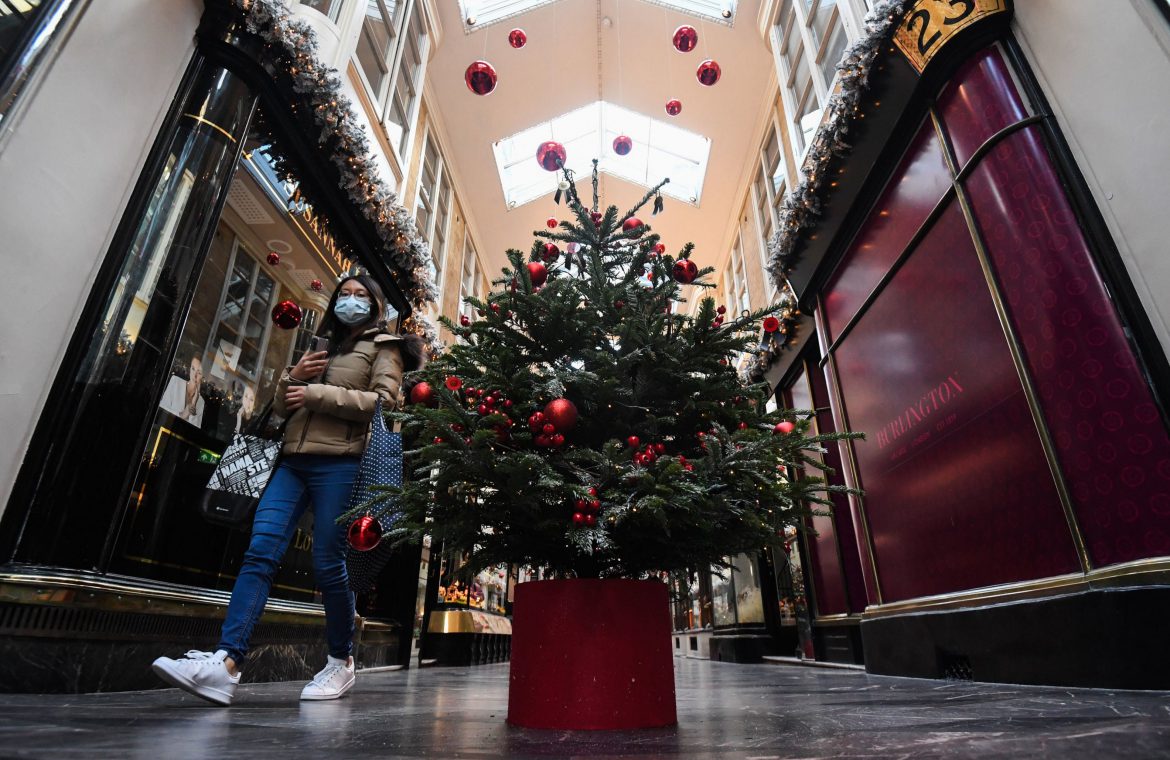 The Prime Minister is to detail his coronavirus winter strategy on Monday afternoon, which includes a proposal to deploy a major testing scheme in an attempt to win over rebels on the Conservative backbenches.

It is understood that he will tell MPs that non-essential shops can open in all three tiers after the current restrictions expire on December 2, in a boost for retailers during the festive period. However, pubs and restaurants will face the harshest of the new measures with businesses in the new Tier 3 only allowed to offer takeaways. Those in Tier 2 must serve food with any drinks, it is reported.

The measures are expected to be further relaxed around Christmas, with the PM expected to say that a small number of households can mix over a limited number of days.

1606121947Vaccine volunteer tells of ‘great feeling’ of being involved in development

A trial volunteer said it was a “great feeling” to be involved in the development process as new data suggested a UK-developed vaccine could be up to 90% effective.

Sarah Hurst, 47, took part in the AstraZeneca and Oxford University research, receiving two jabs of either the experimental vaccine or a placebo.

She said there was a “tiny sense of pride” at her involvement but paid tribute to the scientists and researchers who developed the vaccine.

Ms Hurst, a journalist from Goring-on-Thames in South Oxfordshire, told the PA news agency: “It’s really the developers and everyone who’s done all the work, all the medical students who are constantly all day meeting the vaccine participants and testing them and being on the front line.

“But it’s good, it’s a great feeling to help to make a vaccine.”

Ms Hurst, who said she felt no side-effects from her two jabs, said the results are “promising” and noted that “the fact that it doesn’t need to be chilled at a very low temperature and is cheaper than the other vaccines will help in making it easier to distribute”.

“That’s something you really just have to wait for.”

1606120702Cases drop by two thirds after mass testing in Liverpool

Health Secretary Matt Hancock said cases in Liverpool have been brought down “really quite remarkably” following the rollout of mass testing.

He told BBC Breakfast: “In Liverpool, cases are down by more than two-thirds in the last few weeks.

“And this is a combination, of course, of those restrictions that have been in place, but also in Liverpool we put in mass testing.

“They’ve tested over 200,000 people of the just over half a million who live in Liverpool. And they’ve found a load more people who were asymptomatic, didn’t know that they had a problem, didn’t know they have the virus.

“And the combination of the mass testing, and the measures in Liverpool, have brought the cases down really quite remarkably, much faster than I would have thought was possible.”

On the post-lockdown plan for England set to be unveiled by the Prime Minister, Health Secretary Matt Hancock said the tiered system will “have to be stronger” than it was previously.

“The number of cases is now clearly starting to fall across the whole of the UK,” he told BBC Breakfast.

“In England, we come to the end of the lockdown as you know on December 2, and so we do think that we can replace the lockdown with a tiered system.

“But the tiered system, whilst lighter than lockdown, will have to be stronger than the previous tiers that were in place.”

Asked if there will be a fourth tier, Mr Hancock said: “No, three tiers, but the top tier, Tier 3, will have to be stronger than the previous Tier 3.”

1606119619Oxford immunisations could begin in December

AstraZeneca executive vice president Sir Mene Panglos has said immunisations could begin in December if the regulators give the new vaccine the go-ahead.

“One of the real benefits of this vaccine is the fact that we can manufacture it at scale. It is a relatively easy vaccine to distribute around the world.

“I hope that if the regulators deem the vaccine to be safe and effective – which I hope they will – we should be able to start immunising people in December.”

Prime Minister Boris Johnson said: “Incredibly exciting news the Oxford vaccine has proved so effective in trials. There are still further safety checks ahead, but these are fantastic results. Well done to our brilliant scientists at @UniofOxford & @AstraZeneca, and all who volunteered in the trials.”

Dr Michael Tildesley, associate professor in infectious disease modelling at the University of Warwick, said it could be five months before enough vaccine could be given to the population to achieve some sort of herd immunity.

The member of the government’s scientific advisory body Sage told Times Radio: “The vaccine is on the horizon. But we’re still probably four/five months away from getting to the stage that we can give enough doses out to the population to start thinking about achieving herd immunity as a nation.

“What we really need to do in the meantime is get the message out there that, yes, there is good news – the cavalry is appearing on the horizon – but we need to keep incidence as low as possible. We need to keep observing our social distancing.

“We are still in the winter months, we know there is more pressure on the NHS in the winter and Covid, potentially, could start to peak again if we start to lift restrictions.

“[We need] very clear messaging that that vaccine is out there – hopefully by the new year we can start rolling that out but we need people to keep observing those measures.”

Scientists welcomed the news from the Oxford/AstraZeneca Covid vaccine trial.

Peter Horby, professor of emerging infectious diseases and global health at the University of Oxford tweeted: “Oxford jab is far cheaper, and is easier to store and get to every corner of the world than the other two.”

Dr Michael Tildesley, associate professor in infectious disease modelling at the University of Warwick, told Times Radio: “It’s absolutely excellent news about the Oxford vaccine because this is really the vaccine that the Government has pinned a lot of their hopes on in terms of resources – we’ve ordered 100 million doses of the Oxford vaccine.”

Professor Andrew Pollard said that if people were given a half dose first of the Oxford vaccine followed by a full dose a month later, they had 90% protection.

“There is just a hint in the data at the moment that those who got that regime with higher protection, there is a suggestion that it was also able to reduce asymptomatic infection,” he told the BBC Radio 4 Today programme.

“If that is right, we might be able to halt the virus in its tracks and stop transmitting between people.”

1606116644No severe coronavirus cases in recipients of Oxford vaccine

Professor Andrew Pollard has said that no-one who had received the Oxford vaccine in the trials had required hospital treatment for Covid-19.

“We are really pleased with these results,” he told the BBC Radio 4 Today programme.

“What we have got is a vaccine that is able to protect against coronavirus disease and, importantly, there were no hospitalisations or severe cases in anyone who had the Oxford vaccine.

“So, that means that if we did have people vaccinated then certainly so far the results imply that we would be able to stop people getting severe disease and going into hospital.”