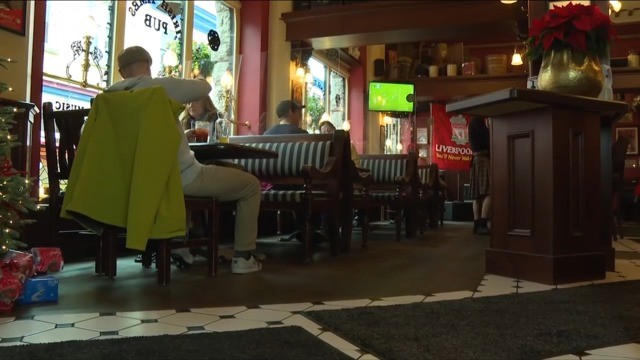 Just days after the new province-wide restrictions limiting social gatherings were announced, restaurants and pubs are feeling the impact.

“I’m ordering that there’ll be no social gatherings of any size with anyone other than your immediate household,” Henry said on Thursday. “Your immediate household can of course include roommates and if you live on your own, you can visit with up to one or two people if you regularly spend time with them.”

All of them have been hit hard, particularly since the new restrictions were announced, with revenue down about 70 per cent across the board.

“Shortly after Dr. Henry’s announcement Thursday, the phones in our rooms, all four of them, started to ring with reservation cancellations,” said MacNeil.

Dozens of cancellations poured in, all of them with similar reasons.

“We asked why and they said there’s too many in their group and they weren’t coming in with family,” explained MacNeil.

Meanwhile, John’s Place Restaurant saw a 31 per cent drop overnight after the restrictions were announced.

“It’s been eight months total,” John Cantin, owner of the restaurant, said. “Every time somebody says something, we listen, we do everything they’ve asked . . . we understand that health is first, but it’s very, very difficult right now.”

Under the new province-wide restrictions announced Thursday, you can only visit a restaurant or bar with those who live in the same immediate household as you. If you live alone, you can go to dinner with people who are in your core bubble.

The province defines a core bubble as one’s immediate household, which is a group of people who live in the same dwelling. For those who live alone, a core bubble is defined as two people you see regularly.

For example, based on the province’s new restrictions, an individual and their spouse who live in the same dwelling can go out for dinner together, but they cannot go out to dinner with people who do not live in the same household as them.

Furthermore, guests must wear a mask when not sitting at a table.

When it comes to enforcement of the household or core bubble rule, restaurant owners aren’t sure how it will work.

MacNeil said it doesn’t make sense for them to do that.

“We can’t be checking for ID at the door to make sure they live at the same address, it’s not what we do and there’s no way to operate a business like that,” he said.

The Ministry of Health told CHEK News the onus is on the individual to follow the rules. It’s not the restaurant’s responsibility to force people to comply.

Don't Miss it UK coronavirus LIVE: Boris Johnson to unveil new Covid tiers with curbs on shops, pubs and gyms ‘to be relaxed’ before Christmas easing
Up Next COVID-19 vaccine: AstraZeneca and Oxford say theirs is 70% effective