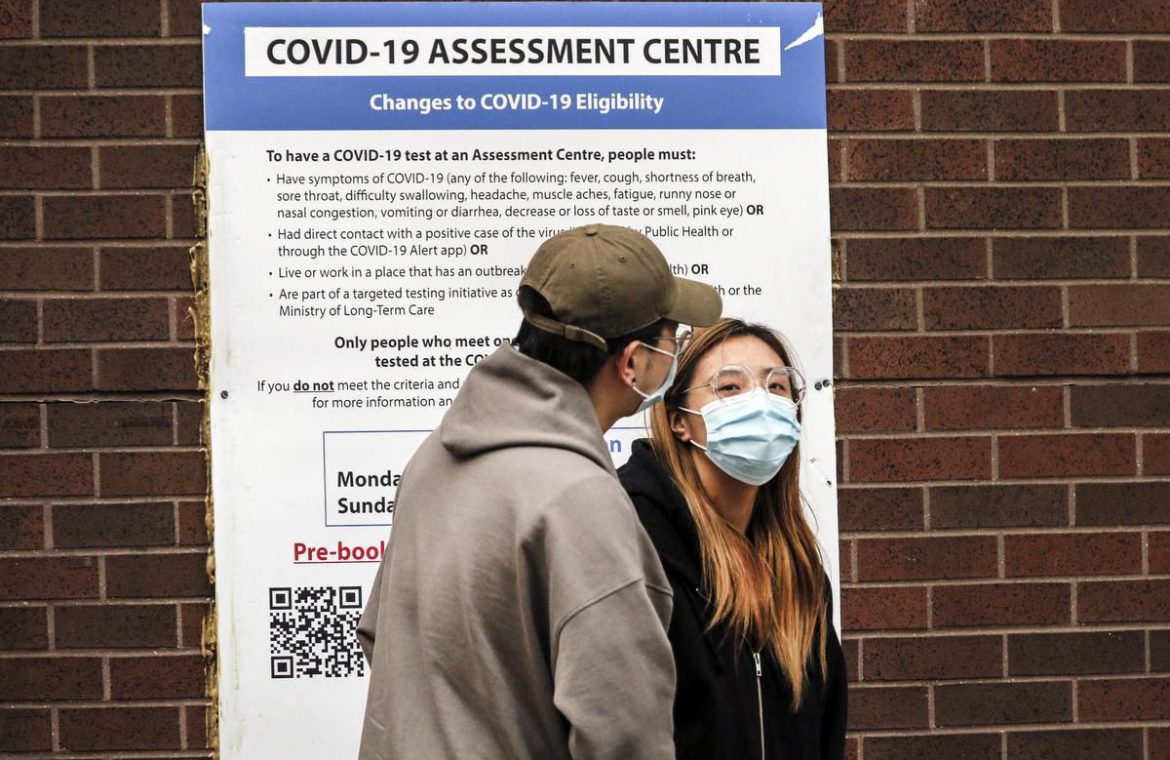 8:10 a.m. China on Tuesday reported two new coronavirus cases in the cities of Shanghai and Tianjin

7:30 a.m. New measures to fight the growing numbers of COVID-19 are expected in Alberta

8:30 a.m. It looks as if this is going to be the winter where we must embrace our true inner Canadian.

Not just lip service to that fact. Like bragging to our American friends how cold it gets up here without telling them we don’t actually go outside without the car seats pre-warmed.

I’m talking about going for walks in the frigidness of winter. It’s probably all we’ll be allowed to do through Lockdown 2.0, and maybe beyond. Skating? Shinny? Hopefully the outdoor rinks will be open — and hey, what’s really in that thermos?

Skiing, downhill or cross-country? Let’s do it. Maybe take up snowboarding. Looks like fun. And maybe the hot chocolate might come with an additive.

8:10 a.m. China on Tuesday reported two new coronavirus cases in the cities of Shanghai and Tianjin as it seeks to prevent small outbreaks from becoming larger ones.

The National Health Commission said there were two new locally spread cases in the previous 24-hour period, one in each city. It also reported 20 cases among people who had arrived from overseas.

In Shanghai, the mass testing of 17,719 workers at the city’s Pudong aiport found one infection, a Fedex employee. Everyone else tested negative.

Three UPS workers at the airport have also tested positive in recent days, along with the wife of one of them. In all, Shanghai has reported eight non-imported cases since Friday.

In Tianjin, where 2.3 million people had been tested as of Monday, the city reported one case in a person who developed symptoms after testing positive earlier. China does not include people without symptoms in its confirmed case count.

7:35 a.m. A little over a year ago, Shiva Montazeri proudly donned her graduation gown after finishing a master’s degree at Brock University, ready for the next step in her pursuit of permanent residence in Canada.

Today, the international student from Iran is facing the grim prospect of having to leave this country after her post-graduate work permit expired last month, without the coveted Canadian work experince she needed to qualify for immigration.

“My work permit was for a duration of one year, but in reality I only got four months out of it. Because of the pandemic, no one is hiring,” says Montazeri, who lost her job as a bookkeeper in St. Catharines, Ont., in March.

“I feel helpless and frustrated. It’s not my fault that I lost my job.”

7:30 a.m. Alberta’s chief medical officer of health says COVID-19 has become like a snowball rolling down a hill, picking up size and speed, and threatening to overwhelm the health system.

Dr. Deena Hinshaw says immediate action is needed to contain the spread of the coronavirus.

Premier Jason Kenney and select cabinet ministers were to meet with Hinshaw, and new measures are expected to be announced Tuesday.

Alberta, once a leader in how to prepare for and contain the virus, has in recent weeks become a national cautionary tale.

There have been well over 1,000 new cases a day for five straight days, and there are more than 300 patients in hospital and more than 60 in intensive care.

Kenney has said he wants targeted measures to control the virus while keeping businesses as open as possible.

6:34 a.m. Business confidence in Germany, Europe’s biggest economy, fell for a second consecutive month in November as a resurgence of coronavirus infections led to partial shutdowns across the continent, a closely watched survey showed Tuesday.

Still, the decline was smaller than economists had predicted. And official data released separately on Tuesday showed that the economy performed a bit better in the third quarter than previously reported.

The Ifo institute said that its business confidence index declined to 90.7 points from 92.5 a month earlier. Economists had forecast a drop to 90.2.

The drop was driven largely by a considerable worsening of companies’ expectations for the next six months. Their assessment of their current situation was only slightly worse. Ifo’s survey is based on monthly responses from about 9,000 companies in various sectors.

6 a.m. University professors and students feel isolated and stressed by online learning during the pandemic and are worried the quality of post-secondary education has deteriorated, a new survey says.

The survey, conducted by Navigator, found that while everyone on campus understands the need to hold online classes during the COVID-19 pandemic, they are concerned students are being put at a disadvantage because of it.

It was commissioned by the Ontario Confederation of University Faculty Associations and will be released Tuesday.

“As a result of the COVID-19 pandemic and the scramble to move courses online, we have lost that human connection, and educational quality has suffered,” said Rahul Sapra, president of the association and a professor at Ryerson University.

The poll of 2,700 students, professors and post-secondary librarians found that 62 per cent of students and 76 per cent of faculty believe online learning has had a “negative impact on education quality.”

Read the full story from the Star’s Kristin Rushowy here.

5:21 a.m. The British government says people arriving in England from a destination not on its coronavirus safe list will from next month be able to reduce the time they have to quarantine themselves if they test negative for the virus.

Transport Secretary Grant Shapps said the 14-day quarantine period can be reduced if people have a negative test from five days after their arrival.

The change, which takes effect on Dec. 15, has been long-awaited by the travel industry, one of the worst-hit sectors during the pandemic.

Under the new rules, passengers can reduce the 14-day period by paying for a test from a private firm on or after day five at a cost of potentially 100 pounds ($133). Results are normally issued in 24 to 48 hours.

5:18 a.m. Germany’s 16 states want people to self-quarantine for several days before visiting family at Christmas, to reduce the risk of spreading the coronavirus to elderly and vulnerable relatives.

The dpa news agency reported Tuesday that states have agreed among themselves on a proposal for tightening Germany’s partial lockdown measures in the coming weeks, so they can be relaxed over the festive period.

The plan, which also suggests bringing forward school breaks and that employers should let staff work from home, will be discussed Wednesday at a virtual meeting with Chancellor Angela Merkel.

Japan has experienced an uptick of the infections this month with a nationwide daily total exceeding 2,000 as the government tries to balance preventive measures and business activity without further hurting the pandemic-hit economy.

“As the host city, I’m determined to achieve the games whatever it takes,” Koike told a news conference in Tokyo on Tuesday.

Her comment comes a week after International Olympic Committee President Thomas Bach’s visit to Tokyo, where he held a series of talks with Japanese Olympic officials, including Koike, to showcase their determination to pull off the games.

Koike said widespread use of masks among the Japanese is one of most effective safety measures that have spared Japan from the high rate of infections that have taken place in the United States and Europe.

Nearly one-third of respondents in the survey conducted by Leger and the Association for Canadian Studies said they have put on weight since March, compared to 15 per cent who said they lost weight over that time.

As well, about one-third of respondents said they’re exercising less, while 16 per cent said they’re working out more since the first wave of the pandemic landed in Canada in the spring.

Jack Jedwab, president of the Association for Canadian Studies, suggested that one reason may be a rush for comfort food to deal with pandemic-related anxieties.

Respondents in the survey who said they were “very afraid” of COVID-19 were more likely to report gaining weight, eating more and exercising less.

Monday 10:18 p.m. Health officials in the Saguenay—Lac-Saint-Jean region are deploying hundreds of contact tracers to try to stop the rampant spread of the virus there.

Dr. Donald Aubin, the regional public health director, told the Montreal Gazette on Monday that the number of COVID-19 cases is “far too high” for a region with such a small population.

“The number of active cases needs to go down,” he said.

Saguenay—Lac-Saint-Jean, an administrative region nearly 100,000 square kilometres in size, is home to just over 275,000 people. Yet regional officials have tallied more than 100 new cases each day for the past two weeks. Aubin said there are currently 1,084 active cases there, giving it the grim distinction of having the most per-capita cases of all Quebec regions.

On Nov. 18, 241 positive cases were added to the region’s tally, more than the 200 reported the same day in Montreal. On Monday, there were 161 new cases there.

“It’s still very high for a region like ours,” Aubin said.

Unlike Quebec City, where a handful of superspreader events were blamed for a flare-up in the number of cases in September, no such events took place in Saguenay—Lac-Saint-Jean, Aubin said.

Don't Miss it UK coronavirus LIVE: Christmas plans being discussed today as London waits to find out post-lockdown tier
Up Next COVID-19 Will Likely Lead to Fewer Births