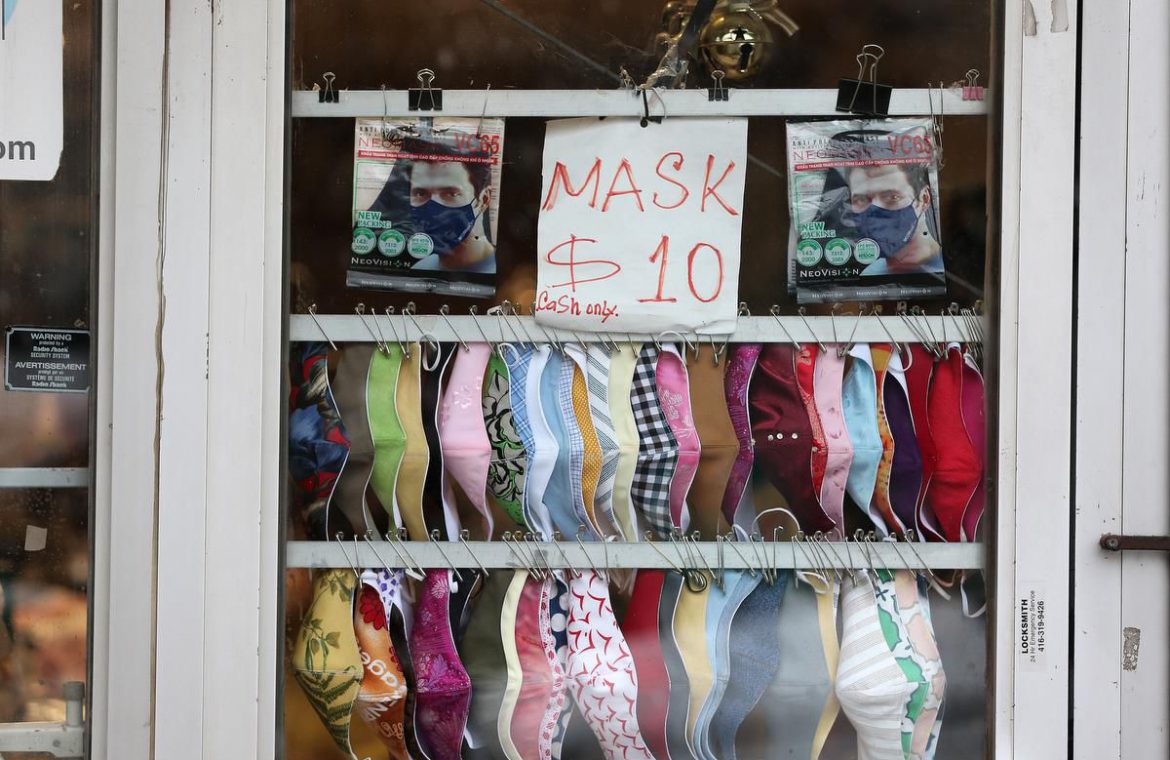 8:10 a.m. Croatia has registered a record number of daily coronavirus cases as authorities consider additional measures to try to stem the outbreak.

The national COVID-19 response team said Wednesday that 3,603 infections have been registered in the past 24 hours and 56 patients have died.

Since Feb. 25, when the first case was registered in the country of 4 million, 111,617 persons have tested positive for the coronavirus and 1,501 have died.

Croatian media say that because of the latest outbreak, some hospitals are running out of beds and infected patients have had to be placed in tents.

Authorities are reportedly considering introducing new nationwide restrictive measures that could include closing cafes and restaurants.

7:57 a.m. With domestic violence on the rise amid the coronavirus pandemic, activists are holding protests Wednesday from France to Turkey and world dignitaries are trying to find ways to protect millions of women killed or abused every year by their partners.

The pope called for global action to mark the International Day for the Elimination of Violence against Women. France’s government sealed a deal with TikTok to encourage young people to report abuse through the social network. World soccer governing body FIFA announced an awareness campaign.

“Men’s violence against women is also a pandemic — one that pre-dates the virus and will outlive it,” said Phumzile Mlambo-Ngcuka, executive director of the U.N. Women agency.

In Ukraine, the Femen feminist activist group staged a topless protest outside the president’s office Wednesday. Protests were also planned in Turkey and France.

7:42 a.m. Canada will not receive any of the millions of prepurchased vaccine doses the federal government has ordered unless and until Health Canada approves the vaccine’s safety, says the minister in charge of vaccine purchase contracts.

Contracts signed with the most promising COVID-19 vaccine manufacturers to date do not provide for delivery to Canada or long-term storage here while regulatory approval is still pending, Public Services and Procurement Minister Anita Anand said Tuesday.

And even if the federal independent regulators swiftly approve any of the three vaccine candidates they are currently reviewing, Prime Minister Justin Trudeau acknowledged that Canada will likely be behind countries like the U.S., Germany and Britain “and others” where those vaccine manufacturers are based.

7:15 a.m. Toronto’s softer condo sales and prices have so far remained at odds with the region’s blazing single-family home market.

Many realtors and economists say the condo sector will regain its momentum once workers return to their downtown jobs and classes, and the stream of immigrants starts flowing again to the Toronto area.

But not everyone buys that.

Investment adviser Hilliard MacBeth, author of, “When the Bubble Bursts: Surviving the Canadian Real Estate Crash,” said the single-family home market will inevitably be affected by the condo sector.

“For almost everybody, if you want to buy a single-family home you’ve got to sell something,” he said. “The problem is, if you can’t sell your condo you can’t move up.”

6:43 a.m. A new national survey by Women’s Shelters Canada offers a glimpse into the experiences of front-line workers and women fleeing violence during the COVID-19 pandemic, with reports of clients facing more violence that is also increasing in severity.

The Shelter Voices survey says 52 per cent of 266 participating shelters reported seeing clients who were experiencing either somewhat or much more severe violence, as public health measures aimed at fighting COVID-19 increase social isolation, while job losses fuel tension over financial insecurity in many households.

Violence “was also happening more frequently, or abusers who hadn’t used violence in the past were suddenly using violence,” said Krys Maki, the research and policy manager for Women’s Shelters Canada.

The survey also found 37 per cent of shelters reported changes in the type of violence clients faced, including increased physical attacks resulting in broken bones, strangulation and stabbings.

Shelters and transition houses that did not report changes in the rates or type of violence were often located in communities that had seen fewer cases of COVID-19, the report notes.

6:21 a.m. Consumer rights advocates are criticizing the latest statement on airline refunds from the country’s transport regulator, saying it contradicts federal and provincial rules to the detriment of customers.

The Canadian Transportation Agency updated its statement on vouchers last week, writing that “the law does not require airlines to include refund provisions” in their passenger contracts — known as tariffs — for flights cancelled due to reasons beyond carriers’ control, such as the COVID-19 pandemic.

The CTA website post tops up its initial statement on travel credit from March, which suggested refunds are mandatory only if the tariff provides for it in certain cases.

However, passenger rights advocates say both statements go against federal and provincial law and legal precedent.

An airline’s terms of carriage must clearly lay out its policy on matters including “refunds for services purchased but not used … either as a result of the client’s unwillingness or inability to continue or the air carrier’s inability to provide the service for any reason,” according to regulations under the Canada Transportation Act.

6 a.m. Toronto’s softer condo sales and prices have so far remained at odds with the region’s blazing single-family home market.

Many realtors and economists say the condo sector will regain its momentum once workers return to their downtown jobs and classes, and the stream of immigrants starts flowing again to the Toronto area.

But not everyone buys that.

Investment adviser Hilliard MacBeth, author of, “When the Bubble Bursts: Surviving the Canadian Real Estate Crash,” said the single-family home market will inevitably be affected by the condo sector.

“For almost everybody, if you want to buy a single-family home you’ve got to sell something,” he said. “The problem is, if you can’t sell your condo you can’t move up.”

Read the full story on whether the drop in Toronto’s downtown condominum prices will spread to detached house prices.

5:15 a.m. German Chancellor Angela Merkel and the country’s 16 state governors are expected Wednesday to extend a partial shutdown well into December, and discuss tightening some restrictions while allowing somewhat more generous rules for the Christmas period.

Proposals drawn up ahead of Wednesday’s video conference by state governors, who are responsible for imposing and lifting restrictions, call for extending the shutdown until Dec. 20.

5:10 a.m. Russian authorities have registered a record number of coronavirus deaths for a second straight day.

The government coronavirus task force reported 507 new deaths on Wednesday, the country’s highest daily toll. The previous record of 491 deaths was reported on Tuesday. A total of 37,538 people have died from the coronavirus in Russia, according to the task force.

Russia has been swept by a rapid resurgence of the outbreak this fall, with numbers of confirmed infections and deaths hitting new highs almost daily and significantly exceeding those reported in the spring.

The country’s authorities have rejected the idea of another nationwide lockdown or widespread closure of businesses, even as media reports from Russian regions showed that the health care system was under severe strain.

5:07 a.m. A top European Union official said Wednesday that the first citizens in the 27 nation bloc could be vaccinated against the coronavirus by Christmas, but she warned that member countries must urgently prepare their logistical chains for the rollout of hundreds of millions of doses of the vaccines.

Claiming that “there’s finally light at the end of the tunnel,” European Commission President Ursula von der Leyen told EU lawmakers that “the first European citizens might already be vaccinated before the end of December.”

The commission, the EU’s executive arm, has agreements with six potential vaccine suppliers and is working on a seventh contract. The deals allow it to purchase over 800 million doses, more than the population of the bloc, which stands at around 460 million people.

On Tuesday, Brussels said it would sign a contract for up to 160 million doses of the experimental coronavirus vaccine developed by Moderna, which the company says appears to be 94.5% effective, according to its preliminary data.

But von der Leyen said that while vaccines are important, “what counts are vaccinations. ”

5:04 a.m. Ontario’s auditor general is set to release a report today on how the province has handled the COVID-19 pandemic so far, including how it has made decisions during the global health crisis.

The special report issued by Auditor General Bonnie Lysyk will look at emergency management in the context of the pandemic, as well as outbreak planning and decision-making.

It will also include an audit of government processes related to COVID-19 testing, case management and contact tracing.

The report is set to be made public this morning.

Wednesday 4 a.m. The Ontario government is expected to spell out its guidelines today for celebrating the upcoming winter holidays as the COVID-19 pandemic continues.

Toronto and Peel Region are currently under the grey or lockdown level in the province’s tiered COVID-19 alert system, with those restrictions to stay in place at least until the week of Christmas.

Public health measures under the lockdown level include a ban on indoor gatherings except with those in the same household, as well as closing down restaurants for all but takeout and delivery.

The province’s top doctor said earlier this week it seemed unlikely the situation would improve in those regions enough over 28 days to warrant moving them to the red alert level, which is one level lower.

Ontario’s most recent modelling showed the province is on track to see up to 6,500 new daily cases of COVID-19 by mid-December, though those projections are expected to be updated Thursday.

Tuesday 10:47 p.m.: A forgiving grading system is the solution students at the University of Manitoba want to address the challenges of learning on a virtual campus this year.

Student senators, backed by the undergraduate and graduate students unions at the U of M, have penned a proposal to school administration to temporarily introduce an alternative grading process, similar to the one put in place in the spring amidst initial COVID-19 disruptions.

The group wants pupils to have the option to either choose a pass-or-fail or accept a letter grade that is excluded from their grade point average calculation for a maximum of one course per term in 2020-21.

Students would still be able to accept all their grades, as usual.

The intent is to “add a little bit of flexibility in this inflexible time,” said Rubel Talukder of the Student Senate Caucus.

Don't Miss it Fears coronavirus ‘third wave’ could hit UK after rules are relaxed at Christmas
Up Next With US in COVID-19 panic, Sen. Perdue saw stock opportunity