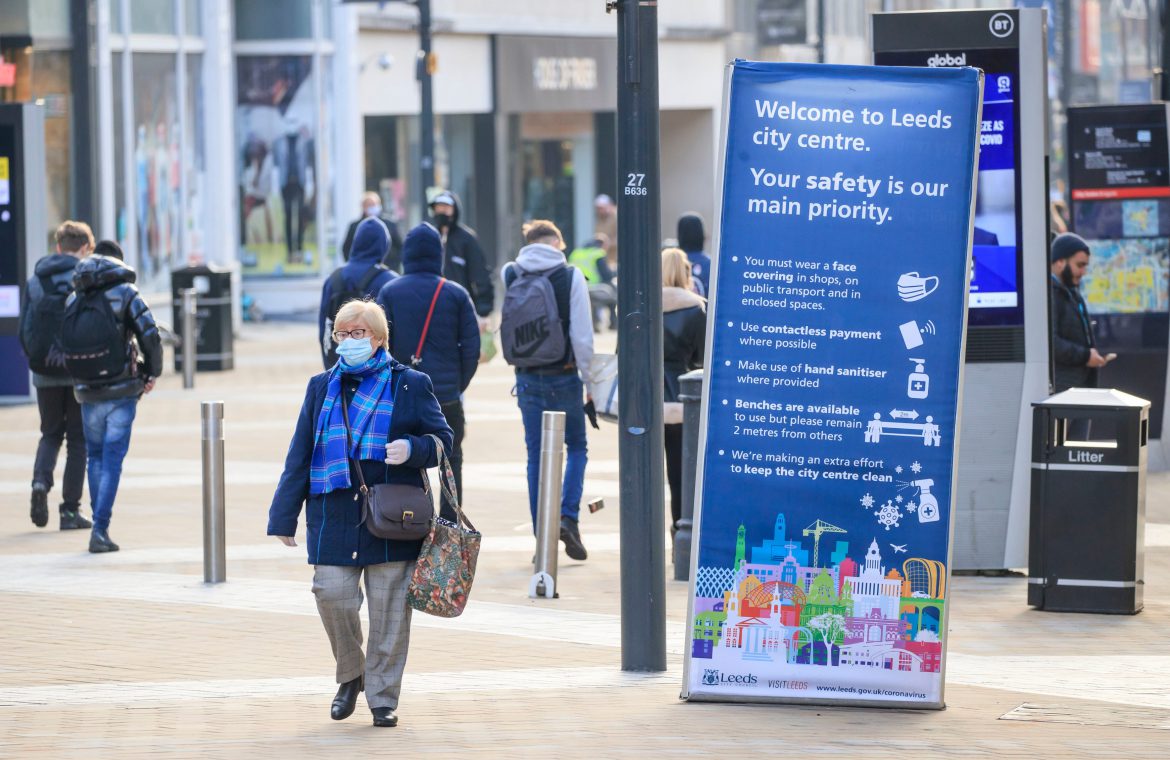 But the Communities Secretary said there was “every reason” to believe some places could see a change when the current tiers are reviewed in mid-December.

Sir Graham Brady, chairman of the influential 1922 Committee of Conservative MPs, said the decision would make it “harder” to push the measures through Parliament. Up to 70 Government backbenchers are reportedly prepared to rebel in a vote on the regulations next week.

Germany hit another grim milestone in the coronavirus pandemic on Friday, ticking above one million confirmed cases of Covid-19.

The Robert Koch Institute, the country’s disease control centre, said that Germany’s 16 states reported 22,806 cases overnight for a total since the start of the outbreak of 1,006,394.

Despite the high number of infections, Germany has seen fewer deaths than many other European countries, with 15,586 — compared with more than 50,000 in Britain, Italy and France, for example.

A rapid response to the initial outbreak, massive testing and a robust hospital system have been credited with helping keep the fatalities down.

A total of 696,100 people have recovered from the virus, according to the Robert Koch Institute’s figures.

The country is almost a month in to a so-called “wave-breaker” shutdown instituted on November 2 after an alarming rise in daily figures to new record highs.

“The point of the tiered approach is, can we get tiers that are sufficiently robust to steer the country through the last few months before we manage to get the vaccine programme rolled out,” he told BBC Radio 4’s Today programme.

Mr Jenrick said families will have to make their own decisions as to whether they hug elderly relatives over Christmas.

“It is very hard not to come together with your kids and grandparents and not want to have a loving family Christmas. That is a matter of a personal decision for individual families,” he said.

“I suspect some families will conclude they want to do things differently this year than they have in the past.”

1606466714Areas could move down a tier before Christmas with ‘collective effort’, Robert Jenrick says

The Communities Secretary told BBC News this morning that areas in England could see their tier allocation change in mid-December if the rate of coronavirus reduces in their area.

Professor John Edmunds said they will have had little chance to assess how well the new tiered controls were working when they come up for the first 14-day review in mid-December.

“I think that is quite an early time to be able to see what the effect has been. I think we will still be seeing the effect of the lockdown at that point in time,” he told the BBC Radio 4 Today programme.

“For me I think that is quite an early review stage. I can’t imagine there will be huge changes at that point just simply because I don’t think we will have accumulated much data by then.”

The NHS hospital trust responsible for the area of London with the highest Covid rates says it can “just about manage” as it revealed a record number of patients were on oxygen.

He told BBC Breakfast: “My biggest gripe I think is the data that we are using. They made a decision on November 25 using last week’s data for the vote that is going to happen next week.

“I would really like the decisions to be made using up-to-date data a couple of days before these new restrictions come in.

“The fact is people can still move around an awful lot and I’m afraid the virus still has the ability to move.”

1606464363More research is needed into the efficacy of the Oxford-AstraZeneca coronavirus vaccine, says former director of immunisation at the Department of Health

Professor David Salisbury said the Government faced some “tough choices” if the vaccine was less effective than others that have been developed.

“I think this has to be unpicked and it may not be possible to do that with the amount of patients that have been recruited so far,” he told the BBC Radio 4 Today programme.

“If this vaccine came through at truly 90% and it is a cheaper vaccine and it requires much less rigorous cold chain (storage) than the RNA vaccines then that would be a great result.

“But if it comes through at 62% and the other vaccines that are coming through so far at 90% then I think you have to think very carefully what do we with a 100 million doses of a product that isn’t protecting as well as the alternatives?

“I think there are some tough choices.”

The Communities Secretary told BBC News: “There will be a review point before Christmas on December 16 so those areas which are on the cusp of one of the tiers, there’s every reason to believe that with a collective effort in those communities, they could come down a tier before Christmas.”

The MP for Bournemouth East, whose constituency will be in Tier 2 after the English national lockdown ends, called for clarity on the issue.

He told BBC Breakfast: “We would really like to see criteria, to see the  justification for this and also better understand what we need to do to get out of this tier.

“I think that clarity of communication is so important at this time.”

Sadiq al-Mahdi, Sudan’s last democratically elected prime minister and leader of the country’s largest political party, died of Covid-19 on Thursday in a hospital in the United Arab Emirates, his party has said. He was 84.

Al-Mahdi was taken to Abu Dhabi for treatment in early November. His body was expected to arrive in Sudan for burial Friday morning, the National Ummah Party tweeted. It had announced al-Mahdi tested positive for the coronavirus on October 29.

Al-Mahdi was overthrown in a 1989 Islamist-backed coup that brought long-time autocrat Omar al-Bashir to power. Al-Mahdi’s party allied with Sudan’s pro-democracy uprising that led the military to overthrow al-Bashir in April 2019.

Sudan has since been ruled by a transitional military-civilian government. Elections could possibly be held in late 2022.

Don't Miss it Millions celebrate in shadow of coronavirus
Up Next COVID-19 in B.C.: 34 schools with new exposures in all five health authorities