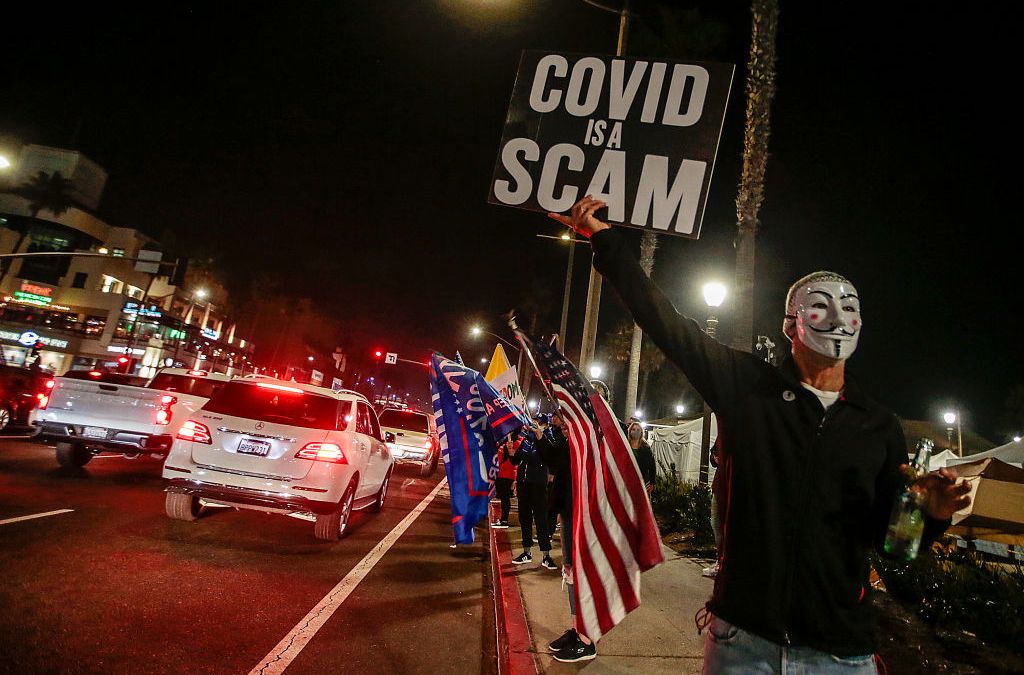 Orange County reported 1,058 new cases of COVID-19 but no additional deaths Sunday, bringing the county’s totals to 77,819 cases with 1,577 fatalities.

The number of county residents hospitalized with the virus jumped sharply, from 534 on Saturday to 597, with the number of patients in intensive care rising from 138 to 148, according to the Orange County Health Care Agency.

The change in the three-day average of hospitalized patients went from 12.3% to 13.6%. The county has 25% of its intensive care unit beds and 63% of its ventilators available.

The mounting numbers over the holiday weekend seem to confirm officials’ fears of a Thanksgiving-fueled surge. Orange County CEO Frank Kim said earlier this week that he was “very concerned” about the rise in cases and hospitalizations.

“And even though the various hospital (executives) I have conversations with seem more confident today than they were early on in the disease in how to treat it, I’m not taking any of it lightly,” Kim said. “Any rise in hospitalizations and ICU rates is a significant concern for our community.”

Officials recommend waiting at least two days after an event or gathering to get tested because the infection might not be detected right away.

“I’m very apprehensive of the trends we’re going to see after Thanksgiving,” Noymer told City News Service. “People don’t appreciate that we were recording deaths from the summer wave through October.”

“But this is not just going to be like another July and go away,” Noymer said. “I think it’s going to get worse.”

The last time hospitalization rates were this high was Aug. 10, Noymer said.

Noymer said that’s mainly because the colder weather is pushing people into more indoor activities and some students are still attending classes in classrooms.

The worst day for COVID-19 hospitalizations in Orange County was July 14, when there were 722 patients.

In the state’s tiered monitoring system, which is updated on Tuesdays, the county’s adjusted daily case rate per 100,000 residents jumped from 10.8 to 17.2 and the positivity rate swelled from 4.6% to 6.8%.

The positivity rate fits in the red tier of the state’s four-tier reopening roadmap, but the daily case rate per 100,000 is well past the 8% threshold for the most-restrictive purple tier.

Kim said he was optimistic vaccines are on the way and are scheduled to arrive by year’s end. Hospital systems will get the vaccines directly and individual hospitals will receive doses from the county, Kim said.

Frontline health care workers will be among the first to receive vaccinations, along with people with underlying health conditions that make them especially vulnerable to the disease.

NBC4’s Conan Nolan talks with Los Angeles County Health Director Barbara Ferrer, PhD on the measures being taken to stem the increase of COVID cases. Are we doing enough or are some measures such as the ban on outdoor dining–considered unnecessary by some—actually end up increasing transmission of the virus by sending more people indoors?

The hope is that increased testing and awareness of infections will encourage more quarantining and isolation and other social distancing practices that help curb the spread of the virus, Kim said.

Kim said the county is focusing on encouraging testing. The number of tests conducted in the county was 1,445,183, including 8,037 reported Sunday. There have been 59,401 documented recoveries.