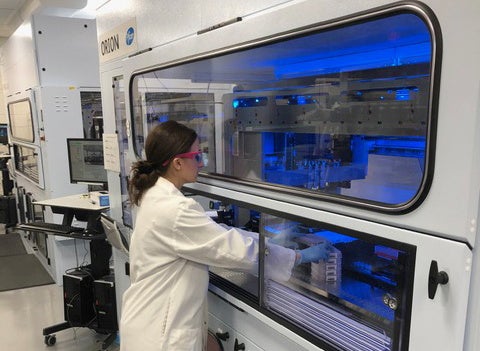 The government has authorised the first Covid-19 vaccine following approval by the the independent medicines agency for the Pfizer-BioNTech jab, with officials saying it will be made available “from next week”.

The Medicines and Healthcare products Regulatory Agency (MHRA) has concluded that the Pfizer-BioNTech vaccine has met its “strict standards of safety, quality and effectiveness” after months of rigorous clinical trials and a thorough analysis of the data by experts, a government spokesperson said.

However, the breakthrough has been slightly tempered by concerns that the vaccine may not be able to be used in care homes because it needs to be kept so cold.

The prime minister backed a warning from the Welsh government – telling MPs there were “logistical challenges” in distributing it widely.

Sean Marett, chief commercial officer at BioNTech and responsible for distribution, said the Covid-19 vaccine could be delivered to care homes, as studies now show it can be transported at 2C to 8C for up to six hours.

People who test negative for Covid-19 can now visit loved ones care homes, the health secretary has said.

Matt Hancock said: “From today I’m absolutely thrilled to say that we can safely allow visits in care homes for those who test negative for Covid-19. Coronavirus has denied so many people the simple pleasure of seeing a loved one, which is so precious to so many, especially in our care homes.

“This is only possible because of the success we’ve had in building one of the biggest testing capacities in Europe.”

The World Health Organisation (WHO) has issued new guidance on wearing face coverings, recommending that, where Covid-19 is spreading, they be worn by everyone in health care facilities and for all interactions in poorly-ventilated indoor spaces.

The WHO said that people – including children and students aged 12 or over – should always wear masks in shops, workplaces and schools that lack adequate ventilation, and when receiving visitors at home in poorly ventilated rooms.

They should also be worn outdoors and in well ventilated indoor spaces where physical distancing isn’t possible.

Scotland will begin administering the coronavirus vaccine on Tuesday, Nicola Sturgeon has said.

Scotland’s first minister welcomed the UK becoming the first country in the world to approve the Pfizer and BioNTech Covid-19 vaccine , saying it may mark the “beginning of the end of the pandemic”.

The full safety data and clinical trial results have still not been published by Pfizer and neither has any technical analysis by the MHRA. Its chief executive June Raine told a Downing Street press conference that the public could be confident there had been an “extremely thorough and scientifically rigorous review.”

It would be far better if Pfizer, the government and the MHRA adopted more of a “show not tell” approach.

The Department of Health confirmed to The Independent it has given Pfizer an indemnity from being sued by patients and that the jab has been authorised under emergency regulations, specifically regulation 174 of the Human Medicine Regulations 2012.

1606914440Care home visitors to be tested from next week in Scotland

Nicola Sturgeon has announced care home visitors will be tested using lateral flow technology from next week in Scotland.

The Scottish government pledged to expand testing to those visiting care home residents last month and a trial has been announced for 15 care homes in five council areas.

Initially, health secretary Jeane Freeman said the testing regime would be rolled out in the new year but first minister Ms Sturgeon has said kits will be sent to all care homes by 14 December.

She said: “It’s possible that not all homes will be able to make lateral flow tests available before Christmas, so we are also planning to make PCR testing of visitors available when that is necessary after the festive period.”

While lateral flow tests return quicker results, they are vastly less sensitive than the PCR screenings.

Sean Marett, chief commercial officer at BioNTech and responsible for distribution, said the Covid-19 vaccine could be delivered to care homes.

He explained: “We have stability studies now really supporting the evidence for being able to transport up to six hours at two to eight degrees, so you can really take vials from the vaccination centre – one of the large ones – put them in a bag at 2C to 8C, and take them to the care homes where they can be administered directly to the patients.”

He added: “If you store the vaccine in a fridge, you can store it for up to five days.

“If you want to take some of those vials out of the fridge containing the vaccine, and ship them to a local care home, then you have to do that within six hours at two to eight degrees.”

Mr Marett said one option is pure storage where you take the vaccine out and use it for the patient, and the other is to put it in a van, and deliver those vaccines to a care home.

“There you need to deliver within six hours, at 2-8C and use the vaccine thereafter,” he said.

SNP Westminster leader Ian Blackford raised concerns about people who have taken their own lives during the pandemic after being excluded from government support measures.

Appearing remotely, he told the Commons: “There are millions who still haven’t had a single penny of support from this UK government. Yesterday I met with Excluded UK who represent many of these three million citizens.

“For the last nine months, the excluded have been living without any help, without any hope and it is now tragically costing lives. They told me something genuinely shocking – they are aware of eight people who have taken their own lives in the last 10 days. Eight people in 10 days.

“We are now a little over three weeks from Christmas. These people need help. Will the prime minister commit to looking again at the support package for the excluded to ensure no-one is left behind?”

Boris Johnson responded: “I obviously sympathise very much with those who have taken their lives and their families, and this has been a very tough time for the country. We’re investing massively in mental health support across the country as he knows which flows through in Barnett consequentials obviously to Scotland.

“We’ve put in a huge package of support and he knows this, but I must repeat this for self-employed people across the country, and I know there are hard-to-reach people, but they are also supported with the increases in Universal Credit and the many other means of support that are currently on offer.”

Care homes may not be able to use the Pfizer vaccine approved today because of the need to keep it so cold, Boris Johnson has warned.

The prime minister backed a warning from the Welsh government – telling MPs there were “logistical challenges” in distributing it widely.

Read updates on this story below:

The Labour leader told the house the opposition has called for legislation to clamp down on the issue, with financial penalties for companies that fail to act. He asked the prime minister whether he will work with the them to bring forward emergency legislation in the coming days.

Mr Johnson replied: “We are of course working to tackle all kinds of disinformation across the internet and he is right to single out the anti-vaxxers and those who I think are totally wrong in their approach and he is right to encourage take-up of vaccines across the country and we will be publishing a paper very shortly on online harms designed to tackle the very disinformation he speaks of.”

Labour leader Sir Keir Starmer pressed the PM about the plan for care homes once the Pfizer vaccine is rolled out given the practical difficulties, including the fact the jab needs to be stored at very low temperatures.

Mr Johnson told the Commons: “It does need to be kept at -70C so there are logistical challenges to be overcome.

“We are working on it with all the devolved administrations to make sure the NHS across the country is able to distribute it as fast and as sensibly as possible to the most vulnerable groups.

“That’s why it’s also important we get the AstraZeneca vaccine, which we hope will also come on stream.”