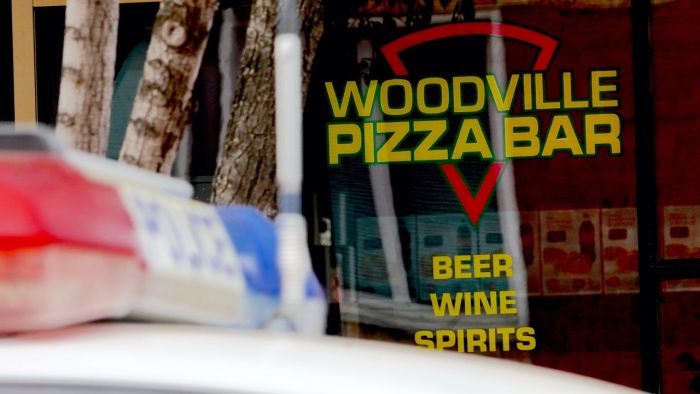 The man accused of lying about a job and forcing South Australia into an unnecessary three-day lockdown will not face any criminal charges.

Key points:The worker allegedly told contact tracers he bought a pizza rather than worked at the barAuthorities then believed the coronavirus strain he spread was particularly contagiousNo charges will be laid against him

South Australian police said there was not enough evidence to prove an offence has occurred.

Police said SA Health refused to provide details of their conversations to police.

A taskforce — with 20 detectives — was established to investigate after it was revealed the man lied about working at a pizza bar and instead said he had only been there to pick up a takeaway order.

It led authorities to believe that the strain of the virus was especially contagious, which led to locking down the state.

After the alleged lie was uncovered, SA Premier Steven Marshall promised to “throw the book” at the worker, who had also worked as a kitchenhand at the Stamford Plaza medi-hotel.

Police then said the Spanish national “had not told the truth” but today Taskforce Protect head Assistant Commissioner Peter Harvey said he would not face charges.

“Based on the limited evidence available for presentation to a court, the matter would not likely succeed or progress,” Mr Harvey said.

“Based on that advice, no criminal charge will be laid by the taskforce investigators against the male suspect at the centre of investigation.

“From a criminal investigation perspective, this matter is complete.”

Catch up on the main COVID-19 news from December 2 with our coronavirus blog. An empty South Road in Hindmarsh during Adelaide’s coronavirus lockdown.(ABC News: Brant Comming)SA Health claims ‘privilege’ on conversation

Mr Harvey said SA Health only gave police a “broad understanding” of the man’s initial conversation with the contact tracer, rather than “actual evidence” they would need to mount a court case.

“I wouldn’t use the word hindered but I can just speak clearly and factually — information cannot be provided or will not be provided by them,” he said.

“It is what it is … SA Health have exercised what they say is their obligation to claim privilege and not provide information to the investigators.”

It is not yet clear what privilege SA Health officials exercised in refusing to participate, but the state’s Public Health Act only allows officials to disclose personal information in certain circumstances.

Those circumstances include the disclosure being made in the course of official duties, with the consent of the person to whom the information relates, being required by a court or tribunal, or authorised under the regulations.

Through his lawyer last week, the man at the centre of the case said he was “extremely remorseful and deeply sorry for any part he played in any unnecessary lockdown actions”.

However, he said some information the State Government had put out about him was “not fair, accurate or complete”.

Since the man’s case was disclosed, a teenage girl who got a pizza from the same shop went to school with COVID–19 and a man went shopping while he was infectious, but Chief Public Health Officer Nicola Spurrier said they had done nothing wrong.

The Parafield cluster originated in a coronavirus case at the Peppers Waymouth Hotel in Adelaide’s CBD.(ABC News: Michael Clements)

Two other people associated with the pizza bar, who police were also interested in, will also not face prosecution.

“All I will say about the other people is they’ve exercised their right to silence,” Mr Harvey said.

What evidence was gathered has been presented to the Director of Public Prosecutions and senior SA Police prosecutors.

Don't Miss it UK economy won’t reach pre-COVID-19 level for at least two years – Reuters poll
Up Next China has promised millions of coronavirus vaccines to countries around the world. And it is ready to deliver them