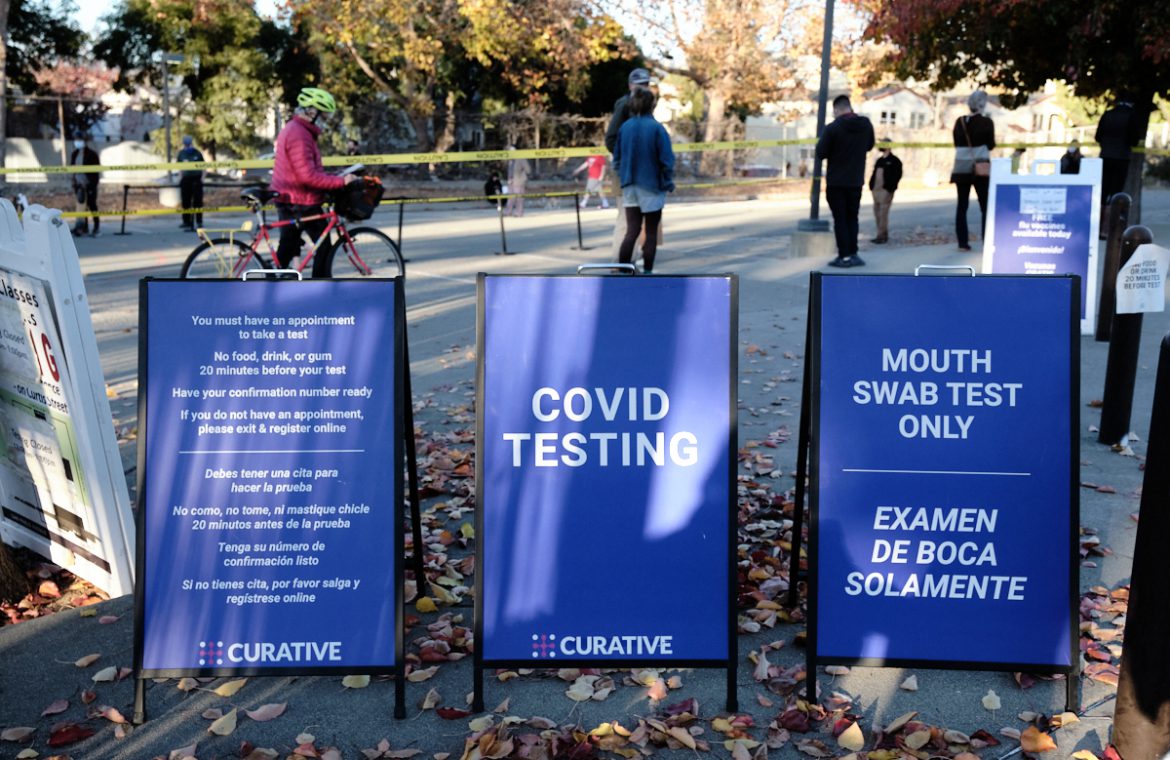 Update, 9 p.m.: Alameda County health officials said in a statement that they may enforce the shelter-at-home orders sooner than the state requires if community spread worsens and ICU capacity begins to drop. The latest numbers put capacity at 33%, according to the county’s data on hospitalizations.

“Although Alameda County’s ICU capacity currently exceeds 15%, if this situation worsens, we may need to enact the State’s Stay-at-Home restrictions before the Bay Area region meets the threshold in order to protect ICU bed availability and save lives,” officials said.

Original story: Amid a dramatic surge of COVID-19 cases statewide, Gov. Gavin Newsom today announced a new set of shelter-in-place orders that will go into effect in Alameda County if ICU hospital capacity for the Bay Area drops below 15%, as is expected later this month.

The five regions in the new COVID-19 guidelines. Photo: State of California

The Bay Area is faring the best among the regions, which are all expected to drop below 15% early this month, but Newsom said local ICU capacity could fall below the limit in the Bay Area a few days after that. The following rules will be in place if that happens:

No gatherings with people outside of your household.
Bars, wineries, personal care services like hair salons and barbershops and playgrounds, will be closed.
Schools that have already opened can remain open, as well as critical infrastructure, retail at 20% capacity and restaurants for takeout and delivery.

Subscribe to the Daily Briefing
Don’t miss a story. Get Berkeleyside headlines delivered to your inbox.

Regions will need to adhere to the restrictions for at least three weeks, at which point the state will look at community transmission and trend lines for the weeks ahead. If requirements are met and the restrictions are lifted, counties will return to their tier in the State COVID Blueprint.

The variance system that previously allowed Berkeley and Alameda County to impose less restrictive guidelines is no longer in effect, and the city and county will have to follow state rules and restrictions if they are enacted. The county and city do, however, have the ability to impose even stricter rules.

Newsom also announced Thursday that all non-essential travel will be restricted statewide during the ongoing surge.

“We do not anticipate having to do this once again, but we really all need to step up.” — Gov. Newsom

“There’s light at the end of the tunnel, we are a few months away from truly seeing real progress with the vaccines, real distribution, real accessibility, real availability,” Newsom said, calling the third wave the “final surge” of the pandemic.”We do not anticipate having to do this once again, but we really all need to step up.”

The state has prioritized administering over 320,000 doses of the vaccine in three tiers, which it expects to start receiving this month. This includes hospitals at prisons, health care workers and other vulnerable populations. Selected regions will begin placing orders for the vaccine on Friday, Newsom said.

On Nov. 19, the state passed a limited stay-at-home order that required non-essential businesses to close between 10 p.m. and 5 a.m. every day until Dec. 21. The new rules are in response to the highest case numbers in the state since the beginning of the pandemic, which average at nearly 15,000 cases a day.

The effects of the Thanksgiving holiday are not included in the current numbers. One month ago, there were 14 deaths a day in California. Now, the daily death rate has been in the range of 113 deaths a day in the state.

Numbers in Alameda County have also seen a spike, but a recent daily case records were at least partially due to a single outbreak at the Golden Gate Fields racetrack at the border of Albany and Berkeley. More than 200 workers contracted the virus there, and the track said over 95% of the cases were asymptomatic.

There are currently nine cases per 100,000 residents in Alameda County, which is adjusted for the amount of testing in the county, with an overall test positivity of 3.6%. Since the beginning of the pandemic, 520 people have died county-wide.

Hospitalizations have shot up in the last few weeks to 157, and 57 in the ICU, compared to a high of 213 hospitalized and 62 in the ICU in July. But hospitalizations have increased at a faster rate in the current surge. There are 85 available ICU beds in the county right now (part of the total regional availability), which is about 30% of its total.

Berkeley, which has its own health department, has a positivity of 1.13% and an average 10 cases per day in the last week. Deaths in the city have remained at nine.

On a Monday town hall with Mayor Jesse Arreguín, Berkeley Public Health Officer Dr. Lisa Hernandez said the outbreak at Golden Gate Fields contributed considerably to the city and county’s cases, but it’s not the sole reason for the surge. She attributed rising cases to gatherings inside homes, as well as a few cases at workplaces.

“We’re worse off than we were at the beginning of the pandemic; however, we know what works to flatten the curve,” Hernandez said, emphasizing the continued importance of social distancing, masking, reducing travel and avoiding gatherings.

Help us keep you informed in difficult times

Berkeleyside relies on reader support so we can remain free to access for everyone in our community. Donate to help us continue to provide you with reliable, independent reporting.