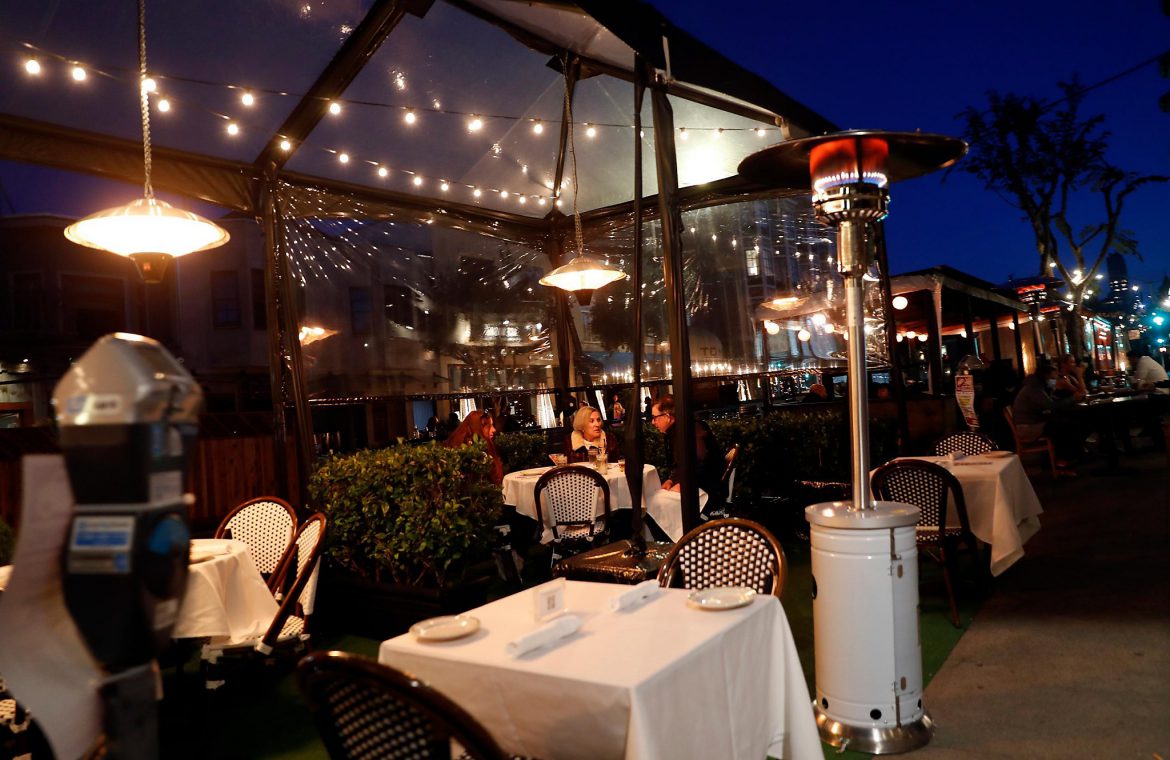 Outdoor dining is teetering on the edge of another ban in California as coronavirus cases continue to surge. But experts are divided on just how likely outdoor dining is to spread the virus, especially as so many different forms of restaurant spaces have evolved over the course of the pandemic.

The new stay-at-home order Gov. Gavin Newsom announced Thursday splits the state into five regions, and applies stringent restrictions — including shutdown of all sit-down dining — to those whose intensive care unit capacity drops below 15%. Most of the state is expected to fall under the order early this month, with the Bay Area following as soon as mid-December.

The move is the latest in California’s mercurial policy around dining, with numerous stops and starts since the pandemic began. Takeout and delivery would still be allowed, but parklets, heat lamps and other outdoor dining accommodations would be mothballed for a minimum of three weeks in regions under the ban.

The news comes on the heels of a legal battle in Los Angeles County, where a judge has ordered public health officials to return to court Tuesday with scientific evidence that justifies the county’s recent outdoor dining ban, the Los Angeles Times reported.

But does such data exist? Infectious disease experts in the Bay Area aren’t so sure.

Restaurants have been mandated by the state to impose certain regulations and hygiene measures. They follow the general principles of harm reduction that Monica Gandhi, an infectious disease expert at UCSF, goes by: masks, distancing, ventilation and hand hygiene.

“There is no evidence that I can find anywhere in the world that outdoor dining with those four procedures in play increases the risk of COVID-19,” she said.

The data that does exist is minimal and hasn’t looked specifically at outdoor dining, Gandhi said, and the two most frequently cited studies have not been nuanced enough.

A recent control study by the CDC included dining as a risk activity, but didn’t distinguish between outdoor and indoor dining. In a Nature study, dining was included as a higher risk activity, but the paper did not model any of the mitigation procedures of ventilation, masking and more, she said.

And such measures can vary widely depending on the scenario.

Dining scenarios have many variables that can transform what could be a safe and pleasant outdoor dining experience into a very dangerous one, Chin-Hong said. The most important is individual adherence to standard coronavirus protocols, followed by a long list: How crowded is it? Is everyone, patrons and wait staff included, being judicious about their mask-wearing? Is it loud, with lots of shouting and screaming? Is alcohol involved?

The ideal for a safe outdoor dining experience would be far from the current reality on Valencia Street in San Francisco, where pedestrians walking their dogs have to weave through small tables on the sidewalk, and crowding is commonplace, Chin-Hong said.

A better option, he said, is closer to something with tables spaced apart for small groups, ideally in a parklet with walls separating parties (which allows transmission to be more controlled while not sacrificing ventilation), and away from a major thoroughfare where many others are walking or running through.

Of course, there are hidden risks, because the behavior of individuals is often unknown — but that is the element that is most difficult to control, Chin-Hong said.

“Valencia and Dolores would be the riskiest interpretations of outdoor dining,” he said. “But a packed beach with people having snacks is a risky outdoor proposition, too.”

Gandhi said that during the surge, the tendency is to want people to halt all activity. “But in the balance of the long-term impact on the economy and the businesses, I think it’s fair for us as infectious disease experts and public health officials to go by data.”

When the principles of harm reduction are followed, she said, “there is no data with these four procedures that (shows) outdoor dining has driven this increased risk and surge.”

Experts have expressed concern that outdoor dining can create a false sense of security, according to the New York Times. But Gandhi worries that an “arbitrary” ban on outdoor dining could make the surge even worse, with more people compelled to gather secretly, and indoors.

She worries too, that the collective distrust around public health — especially in light of two French Laundry events attended by Newsom and San Francisco Mayor London Breed — will only lead to more rebelling and dangerous activity.

“There has been an erosion of public trust, 11 months into a pandemic, where the public has been informed again and again that outdoor is safer than indoor,” Gandhi said. “It’s eroded because of arbitrary decision making that’s not driven by data. People will sneak around if restrictions are arbitrary.”