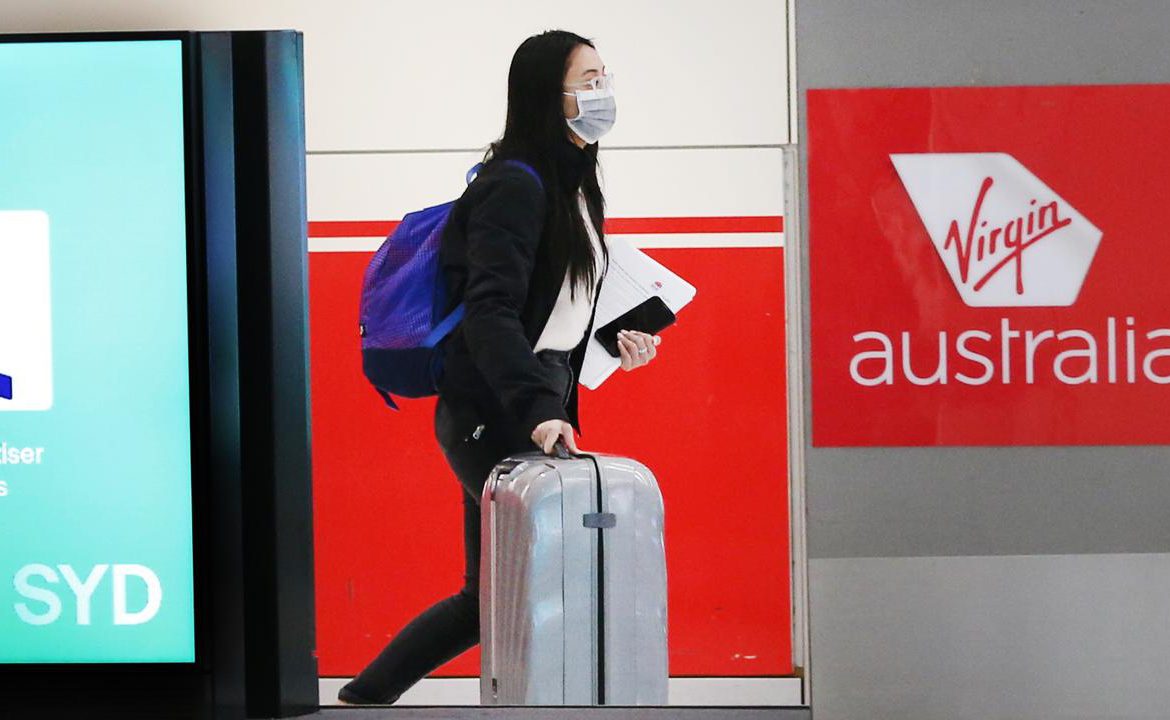 Fears are growing over a COVID-19 travel breach after two German travellers flew to Victoria from NSW without undergoing international quarantine.

Two German travellers have been tested for coronavirus after being caught in Victoria without undergoing international quarantine.

Late on Saturday night a warning was issued to anyone who had been at Melbourne Airport’s domestic Terminal 3 on Saturday afternoon to get tested if they had any coronavirus symptoms.

Victoria’s Department of Health and Human Services also urged anyone who was on a Virgin flight from Sydney to immediately self isolate.

It’s understood about 130 people were aboard along with the two German travellers who are from the same family.

“Two international travellers are now in mandatory quarantine in Victoria, after arriving in Sydney today and boarding a domestic flight to Melbourne without quarantining in NSW,” the department’s statement said.

“A comprehensive public health response is under way, including testing and full contact tracing.”

It is not known when the travellers arrived from Germany before travelling from Sydney to Melbourne.

The Virgin Airways flight VA838 departed Sydney at midday on Saturday and landed in Melbourne at 1.25pm.

Victorian Health Minister Martin Foley said the travellers were stopped at Melbourne Airport and would spend their two weeks in quarantine in Victoria.

“I’ve spoken to (NSW Health) Minister Hazzard to seek an explanation as to how it was that the security arrangements at Sydney Airport saw the two passengers avoid their hotel quarantine obligations in Sydney and travel to Melbourne — he has assured me a full investigation will be completed so it cannot occur again,” Mr Foley said.

The COVID-19 breach follows a bungle in October when 55 New Zealanders entered Victoria after travelling through Sydney Airport without being quarantined.

At the time, Premier Daniel Andrews warned that Victoria was at risk of significant harm because the visitors were able to travel in without undergoing quarantine.

“We cannot just have people wandering into the place from another country,” he said in October.

Virgin Australia said it was providing the passenger manifest to health authorities to assist with contact tracing.

“We can confirm two international passengers travelled on VA838 from Sydney to Melbourne on 5 December. Upon being informed these guests had travelled on our aircraft without entering hotel quarantine, we removed the aircraft from service to perform a deep clean, as a precautionary measure,” a Virgin Australia spokesman said.

After months of being housebound, Victorians have rushed to the shops, eager to make the most of extended Black Friday, Cyber Monday and Christmas sales.

Australian Retailers Association chief executive Paul Zahra said there was “no question physical retail is back”, as stores across the state reported an increase in foot traffic.

“Lockdowns have accelerated the push towards online and hybrid methods of shopping such as click and collect but this only accounts for just over 10 per cent of sales — meaning 90 per cent of retail sales still occur instore,” Mr Zahra said.

“This is a remarkable result in a pandemic year and testament to the power of stimulus dollars still in the economy like JobKeeper and JobSeeker. It also speaks to the resilience of retailers and the enduring love Aussies have for shopping.”

This year is tipped to be a record-breaking year for retail sales, with the Australian Retailers Association predicting Australians will spend up to $54.3bn in the pre-Christmas period.

“By all reports November broke records — it seems many Australians have been smart about this year’s shopping and have got in early to make sure they are covered for Christmas,” Mr Zahra said.

Don't Miss it How to get through Christmas in the time of coronavirus | Christmas
Up Next US sets new daily coronavirus record with nearly 228,000 cases