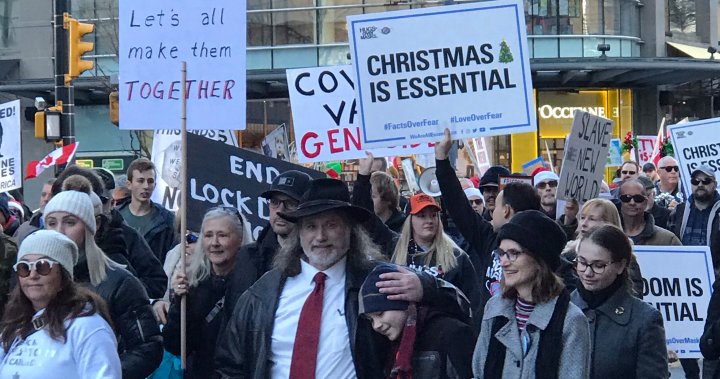 A leading B.C. respirologist says it is “disconcerting” that hundreds of people would gather in Vancouver to rally against masks and protocols to stop the transmission of COVID-19, as case numbers continue to rise.

“It’s really concerning, because at an individual level, masks protect you against the virus and at the population level, if there is not sufficient buy-in in terms of mask wearing, the community transmission of the virus will continue to escalate,” said Dr. Don Sin, head of respiratory medicine at Providence Healthcare and UBC professor of medicine.

“We have to put in every possible intervention to contain the virus while we wait for the vaccine to come and hopefully eliminate the virus altogether.”

Sin cited a recent study which found mandatory masks in Germany cut virus transmission by about 45 per cent, and added that there is no scientific evidence that wearing a mask cuts oxygen intake or can make someone sick.

Sin added that the rally risked drawing people from around the region who could potentially spread the virus into different communities.

Fifty-one people have died of COVID-19 in B.C. in December alone. Active cases in the province and hospitalizations have continued to set daily records in recent weeks.

Donnally addressed the controversy, saying no one from the Canucks had reached out to him about the incident, despite his 20 years with the organization.

Donnelly told the rally he felt he needed to speak up and “support the side of an argument which is being marginalized and censored,” and criticized “draconian” public health measures which he claimed had been implemented without a cost-benefit analysis.

Donnelly went on to inaccurately claim that officials had promised the COVID-19 battle would be a “sprint” not a “10-month marathon from hell” and that officials in all jurisdictions were discussing mandatory vaccines.

Provincial health officer Dr. Bonnie Henry said the province was not contemplating mandatory vaccines as recently as Wednesday, while Alberta Premier Jason Kenney went out of his way to promise vaccines would be voluntary last week.

Attendance at Saturday’s rally was noticeably smaller than a “Mega Freedom Rally” in Vancouver in October, where police estimated more than 1,000 people turned up.

Sin said that regardless of what people are reading on social media, masks have been scientifically proven to be effective.

“I totally understand the frustration, but (masks are) an effective strategy of containing the virus and we all have to pitch in during these dark times to reduce the transmission,” he said.

“Otherwise our rates will just skyrocket and our hospitals will be full of COVID-19 patients, even young patients who may die from the disease.”