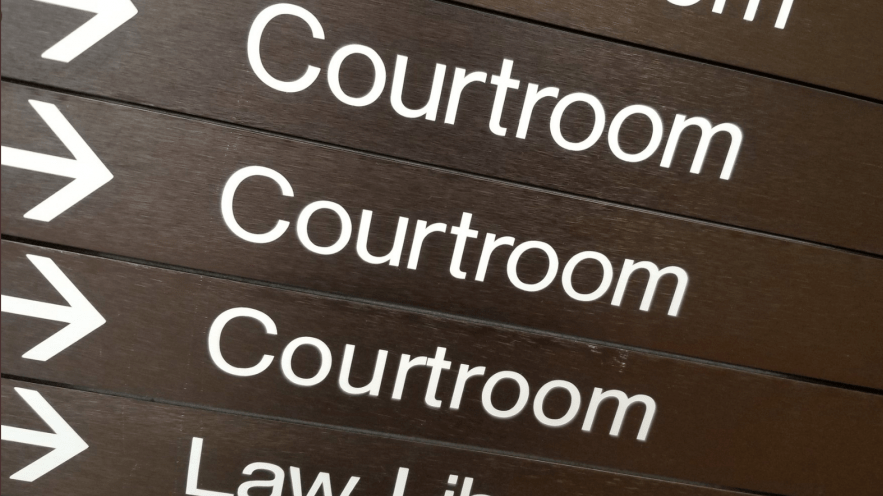 The organization offers legal help to women who do not qualify for legal aid and can’t afford to hire a lawyer. The women Bryson talks to are trying to figure out how the legal system might help them keep themselves and their children safe, or how to get financial support, or how to leave an abuser. Sometimes they have lost their homes or custody of their children. When a woman calls Rise it is because she is in a conflict with a partner, ex, or co-parent that she can’t safely or simply resolve on her own.

“The vast majority of women who come to Rise have experienced abuse. They are dealing with power dynamics. When people get along enough with their exes, they don’t call strangers,” Bryson says.

“Nobody calls a stranger when they have their situation under their control.”

Immediately after COVID-19 was declared a pandemic on March 13, Bryson says there was a sharp drop in calls. She used to field around 45 per week, but she was only answering between 20 and 30.

That changed in June.

“All of a sudden, just like a tsunami, we had that pulling out of the wave. We’re in the 80s consistently every month. We changed our schedule so we could fit in one more intake a day. I take no breaks to check emails, it’s just straight intakes all day.”

Bryson used to field more calls from women seeking legal information, wanting to know what their options are, what support is available, and how the court system functions.

“There was one to two heartbreak cases, women where the system just is not designed to meet their needs. Very sudden applications, women who couldn’t protect themselves or their children, and where the requirements of the legal system were just a little bit out of their reach,” she explains.

“Those heartbreak cases are now three and four. The women that are coming to us are in crisis, there are urgent applications being made all over the place. What we’re seeing is all these women coming to us already in the thick of things. The legal system is not designed to deal with those urgencies especially, especially without having a lawyer. ”

Executive Director Kim Hawkins says Rise is not the only service seeing an increase in calls — particularly from women who are being or have been abused.

“B.C. is no different than a lot of other jurisdictions so there’s been a significant increase in domestic violence since COVID started,” she notes.

“I think we’re like probably every other women’s organization in Vancouver. We have more calls coming in, more people requesting help.”

In its most recent report to the board, the Vancouver Police Department noted that reports of domestic assaults have reached a record high.

“Intimate Partner Violence is at an all-time high, 4.6 per cent higher than 2019 (previous highest year),” it reads. Advocates have noted that many women choose not to report to the police, and frontline organizations such as Battered Women’s Support Services have also reported a sharp spike in the number of women calling their crisis line.

“It’s very difficult for women to be able to even access phones or to get help, because they now can’t get out of the house. The can’t manage the violence in the same way that they might typically do it. So while they might typically do it by leaving the house — going for a walk, getting support from friends, going to work — now they’re actually sort of stuck in the house all the time. It’s had huge ramifications,” she says.

Bryson points out that abusers are using the coronavirus as an excuse to try to exert power and control over women through the legal system. One example of this is ex-partners demanding a list of who a woman has come into contact with.

“What they’re trying to do is use COVID as a front, saying, ‘Oh I need to know who you’re around to make sure you’re safe.’ There’s a lot of different ways that we’re seeing this play out. We are definitely seeing that abusers are using the existing systems and protective systems in order to cause more harm,” Bryson explains.

“Guys that have this history of withholding the child are now using COVID as that excuse to withhold the child.”

She describes one case where a woman has been dragged into court “time after time” due to her ex making urgent court applications all of which have been dismissed, but not before causing significant distress.

“It was a way to get in and to try to get the courts to do things, hoping that the chaos that we’re all living under would give them leverage.”

Hawkins explains that Rise has also encountered a range of COVID-19-specific legal concerns.

“People always have challenges when they disagree about differest aspects of parenting, but now people are having to make decisions about whether or not to send their kids to school, or what’s going to happen with parenting arrangements. They are looking at each other and thinking, ‘Okay, is the other parent taking social distancing and health protocols as seriously as I am?’ That’s raising obviously a lot of challenges for people. They now have to, on top of everything else, navigate those issues.”

Bryson gets “at least one” of these calls every day.

“They’re concerned about the cascading impact of the decisions that are being made by the opposing parties, and how that’s going to impact their lives. I think that women are really at a point of desperation when it comes to this stuff, when it comes to navigating COVID in the context of family law. They’re just trying to have a little bit of control over their lives and to be safe.”

Hawkins says cases where someone is worried about whether a co-parent is putting their child at an increased risk of COVID-19 have made it to the courts. But each is evaluated according to its circumstances.

“Somebody coming in and saying, ‘I just have this general sense that my partner isn’t following protocols,’ or ‘I’m concerned that they may not take it as seriously as I am,’ —  that typically hasn’t been seen by courts to be a reason to change parenting time.

“If people have really clear concrete examples if they can say that the other parent is being reckless, if they can point to really specific behaviours or refusals to follow provincial guidelines, those kinds of things may end up being sufficient to get some sort of change to parenting time.”

There is a legal mechanism wherein a parent can deny contact to another due to concerns over the child’s safety, but Hawkins says it is a risky move unless the child is imminently at risk of violence or harm.

“That is a very serious step. If there’s an order in place you’re effectively breaching a court order,” she says. “It can be justified in exceptional circumstances.”

‘There are lots of us that really want to help’

Bryson explains it’s not her job to promise women she can help them “win” but rather to try to “make a path of access to justice that is doable to them.”

In some “heartbreak cases” where women haven’t seen their children in months because they’ve been removed from their care and visits have been denied, she does what she can.

“What we do is we just make life, hopefully, slightly less crappy that day, or help her to be heard, and let her know that it’s not her fault, that the legal system does not define sho she is as a mom.”

And she wants the phone to keep on ringing.

Don't Miss it 32,981 Fresh COVID-19 Cases In India
Up Next Covid-19: Giuliani Tests Positive for Coronavirus