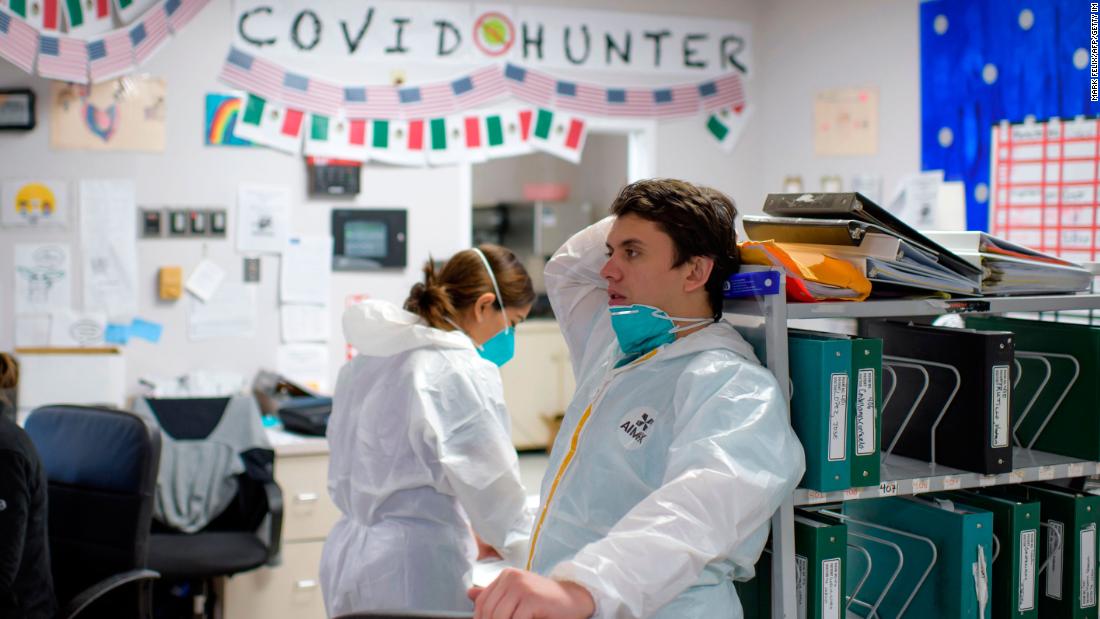 The country has averaged about 2,237 daily coronavirus deaths across a week — just below its highest-ever average of 2,241, set on April 24, Johns Hopkins University data show.

• The number of new daily cases across a week Monday was 201,154 — a US record high for the pandemic, according to JHU data.

• More than 102,140 Covid-19 patients were in US hospitals on Monday — the highest figure of the pandemic, according to the COVID Tracking Project.

More than 15 million coronavirus cases have been reported in the US so far — though researchers have said this is likely a vast undercount, partly because of limited testing capacity, especially early in the pandemic. A CDC modeling study suggested as many as 53 million people in the United States could have been infected from February through September.Health experts are expecting the spread to worsen, anticipating new waves from December holiday gatherings on top of a potential surge from Thanksgiving week.

“We probably are just going to start seeing the brunt of what it means when you have people traveling and congregating in seemingly innocent settings,” America’s top infectious disease specialist, Dr. Anthony Fauci, told CNN on Monday. “The situation is that as we enter now from the Thanksgiving holiday season into the Christmas holiday season, it’s going to be challenging.”

The UK, meanwhile, began administering the first vaccine doses in that nation Tuesday. And in the US, the Food and Drug Administration this week and next will consider granting emergency authorization for vaccine candidates from Pfizer and Moderna, respectively.

Anticipating those authorizations, US officials are ramping up plans to distribute vaccines.

Despite challenges to production and distribution, tens of millions of Americans will be vaccinated by January 20, Health and Human Services Secretary Alex Azar said in an interview with Axios that aired Monday

An advisory committee to the FDA on Tuesday released a document detailing data on Pfizer and BioNTech’s Covid-19 vaccine candidate.

The document confirms that the vaccine’s efficacy against Covid-19 was 95%, occurring at least seven days after the second dose — a rate that had been previously reported by Pfizer. The proposed dosing for this vaccine is two 30-microgram doses 21 days apart.

The document also notes that the vaccine appears to provide “some protection” against Covid-19 following just one dose.

However, Pfizer CEO Albert Bourla emphasized Tuesday that the protection after one dose is “not full,” and that therefore Pfizer’s product is a “two-dose vaccine.”

“People need to take two doses to be able to feel confident that they’re protected at … 95% chance of being protected,” Bourla said during an International Federation of Pharmaceutical Manufacturers and Associations meeting Tuesday.

The document goes on to detail the safety profile of the vaccine as “favorable” and notes that the most common adverse reactions to the vaccine have been reactions at the injection site, fatigue, headache, muscle pain, chills, joint pain and fever.

The document will be discussed in a meeting on Thursday, during which the FDA’s Vaccine and Related Biological Products Advisory Committee will provide recommendations to the FDA on whether the vaccine is effective in preventing Covid-19 in people 16 and older and whether the potential benefits of the vaccine outweigh the risks.

Other vaccine candidates — those from AstraZeneca and Johnson & Johnson — are set to complete Phase 3 trials in January and possibly be ready for use in February, Moncef Slaoui, chief scientific adviser of the federal government’s Operation Warp Speed vaccine initiative, told ABC on Tuesday.

AstraZeneca’s vaccine candidate was found to have an average 70.4% efficacy, according to an interim analysis of Phase 3 trial results published in The Lancet journal on Tuesday.

Those findings fall in line with the efficacy that AstraZeneca announced in November.

Recruiting to vaccinate over the holidays

If the vaccines are approved in the US, officials hope to distribute the first wave this month, starting with health care workers and long-term care facility residents. Efforts are underway to distribute and administer them.

Mount Sinai Hospital System in New York has begun recruiting people to vaccinate its health care workers over the holiday season, Susan Mashni, vice president and chief pharmacy officer for Mont Sinai health system, told CNN. In addition to nurses, pharmacists and those who are currently administering flu vaccines, they are reaching out to pharmacy and nursing interns, as well as medical students and residents.

The system is planning to administer Pfizer’s vaccine in “pods,” using makeshift walls and bays in hospital lobbies, and to stagger the immunizations among employees in anticipation that they will feel side effects.

It is still unclear whether those who have already had Covid-19 and have antibodies should be among the people to receive a vaccine, Azar said Monday.

“That’s something that the FDA has not ruled on and CDC (Centers for Disease Control and Prevention) has not ruled on, yet, in terms of providing guidance,” Azar said during an interview with NBC.

‘If the worst happens, hospitals will not be able to treat’ patients

As the impacts of the virus move through the US, state leaders are managing the strain on their hospital systems.

As of Friday, hospitals in Massachusetts will curtail elective procedures to free up staffing and beds for spiking coronavirus cases, Gov. Charles Baker said Monday.

“You could actually see our positive test rates stop growing” before the holiday, he said. “And after about five to 10 days, which is the typical incubation period after Thanksgiving, they took off like a rocket.”

Pennsylvania is also in an increasingly “dire” situation when it comes to hospital beds, Gov. Tom Wolf said Monday. Pennsylvania Secretary of Health Dr. Rachel Levine said patients are already being diverted to other facilities due to full emergency rooms.

“If the worst happens, hospitals will not be able to treat all sick Pennsylvanians,” Wolf said. “They’ll be forced to turn away people who need treatment, and that means more Pennsylvanians will die.”

In California, modified stay-at-home orders were issued by the state this week for tens of millions of people in the state’s southern and San Joaquin Valley regions because ICU capacities fell below 15%. Counties in the San Francisco Bay Area issued similar orders, deciding not to wait for ICU capacity to fall below that threshold.And in Arizona, where 92% of ICU beds are occupied, nearly half the beds are filled with coronavirus patients, according to the Arizona Department of Health Services.

Meanwhile in Kentucky, Gov. Andy Beshear announced that he does not plan to extend the in-person dining restrictions for bars and restaurants set to expire December 13, meaning the following day they will return to 50% capacity.

The governor added that when restaurants and bars return to indoor service, they will need to be “militant” about mask mandates.

Don't Miss it Manitoba extends COVID-19 restrictions through holidays, but exempts drive-in events and more
Up Next The areas in Greater Manchester with almost no Covid-19 cases