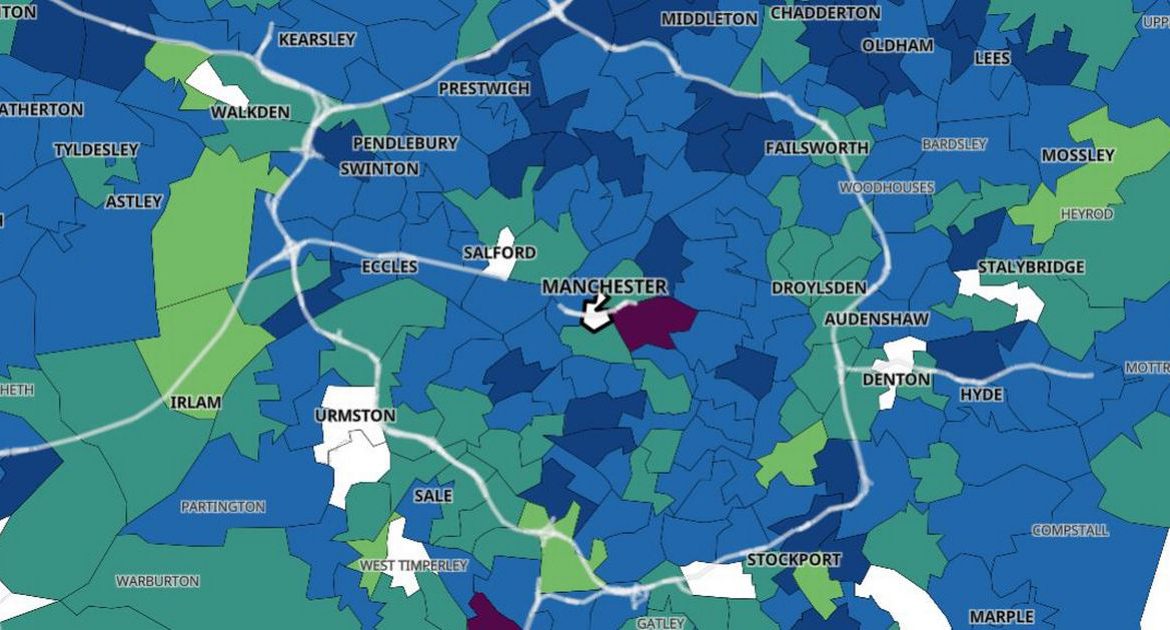 Rates of coronavirus have been falling for a number of weeks in Greater Manchester.

In fact, a number of neighbourhoods in the region are almost Covid free, according to the Government’s coronavirus map.

University North and Whitworth Street, an area which was once a hotspot, last week had the lowest rate in the city.

It’s still the only area in Manchester to have fewer than three cases in the seven days leading up to December 3 – the most recent data set available.

But now cases have dropped to less than three in more than half a dozen areas of Greater Manchester after peaking towards the end of October.

The areas with fewer than three or no cases recorded in the week ending December 3 include:

The data published by the government is for areas known as Middle Super Output Areas (MSOA), which are statistical units that have a population of between 5,000 and 15,000 people.

Pendleton in Salford recorded less the three cases in the seven days leading to December 3..

The area recorded an infection rate of 665.7 per 100,000 people in the week ending October 22, roughly around the peak of the second wave.

Walkden North West in Salford hardly had any cases in the week ending December 3.

Denton North and Dukinfield East and Hough Hill in Tameside now have hardly any cases, the map shows.

Royton South West in Oldham has fewer than three cases after once having infection rate of 1,279.3 in the week ending October 29.

Urmston East in Trafford has also seen a drop of infections to almost zero after peaking at 582.4 in the week ending October 22.

Cases have fallen to below three in Ashton upon Mersey North after its rate once reached 365.2 per 100,000 in the week ending October 8.

A number of neighbourhoods in Stockport now have few or no cases of the virus.

Cheadle Health, all of Bramhall, Poynton West, Offerton East and Bosden Farm and High Lane all had fewer than three cases in the week ending December 3.

People can find out the number of cases and infection rates by entering their postcode in the same interactive map here.

Get breaking news first on the free Manchester Evening News app – download it here for your Apple or Android device.

You can also get a round-up of the biggest stories sent direct to your inbox every day with the MEN email newsletter – subscribe here.

Don't Miss it US Coronavirus: US hits 15 million confirmed Covid-19 cases during deadliest week since April
Up Next China’s Covid recovery: Hopes and fears over what comes next – BBC News