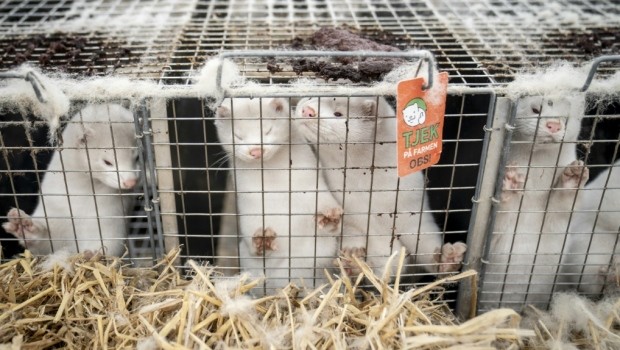 VANCOUVER —
Testing has now confirmed COVID-19 in mink on a farm in B.C.’s Fraser Valley where workers also tested positive.

While the industry says the single outbreak is a sign of the care being taken, those opposed to fur farms say it’s another reason to bring an end to the practice.

The unidentified mink farm has now been placed under a quarantine order after five samples taken from animals tested positive.

On Sunday, Fraser Health announced eight people at the facility also had the virus.

B.C.’s chief veterinarian, Dr. Rayna Gunvaldsen, said mink producers in the province have been “very proactive” in taking extra precautions against the virus, and the current quarantine order means no animals or goods will be able to leave the affected farm at this time.

“This disease in mink in many places where it’s been discovered, and it’s also true in this farm, is a mild disease in the animals, so it’s not particularly severe,” she said. “The quarantine order really controls the risk that that virus can be transmitted off farm, and be a risk to other animals. So from an animal health perspective at this time, there wouldn’t be benefit to a cull.”

The province said the positive results in mink were expected considering the interaction with infected workers. On Monday, provincial health officer Dr. Bonnie Henry called it a “great concern.”

“We’ve seen outbreaks on animal farms such as this, particularly mink farms, where there has been transmissions from human to mink and back and where we’ve seen some mutations of virus in some parts of the world,” she said.

In Denmark, the virus led to a mass cull of 17 million mink.

Spokesperson for the Canada Mink Breeders Association Alan Herscovici said the situation in Denmark is “completely different” from Canada.

“Denmark has been the biggest producer in the world. They’re producing over 17 million mink, on 1,100 farms, in an area about the size of Vancouver Island,” he said. “Compare that with Canada where we have about 60 farms producing under a million mink all across the country.”

Herscovici said he would not expect a cull to happen in Canada, but rather a quarantine approach similar to what’s been happening on farms with outbreaks in the United States.

“Within about two weeks, almost all the mink will have antibody immunity, and will be immune, and it’ll pass,” he said. “Canada, in fact, is one of the last producing countries where we see any cases, so obviously the farmers are taking care.”

Projects and communications director for the Vancouver Humane Society Peter Fricker said they’re not surprised to hear the virus has been found in the mink, as it has happened elsewhere in the world.

“The animals, in terms of mink, are kept in small cages packed together in cramped conditions in large numbers in big sheds,” Fricker said. “And those create the perfect conditions for viruses to spread and possibly to mutate. So in addition to being an animal welfare issue, there’s now the potential for this to be a threat to human health.”

Fricker said his group would hate to see a mass cull, but wants fur-farming to end.

“When you think that this is all to provide a luxury item to a small number of consumers, it seems just immoral to be making these animals suffer, and now allowing this industry to pose a potential threat to human health,” Fricker said. “It really should be banned.”

“These are small family farms,” he said. “It’s time to support them, not to attack them.”

The province says the Fraser Valley farm was inspected in September and was found to be in compliance with animal welfare and biosecurity standards.

Dr. Gunvaldsen said the quarantine order will remain in effect until it’s determined the risk of transmission is lowered.

Don't Miss it Christmas during COVID-19: Don’t hug, avoid indoor gatherings, say experts amid fear of surge in cases
Up Next US coronavirus: Daily reported deaths from Covid-19 top 3,000 for the first time