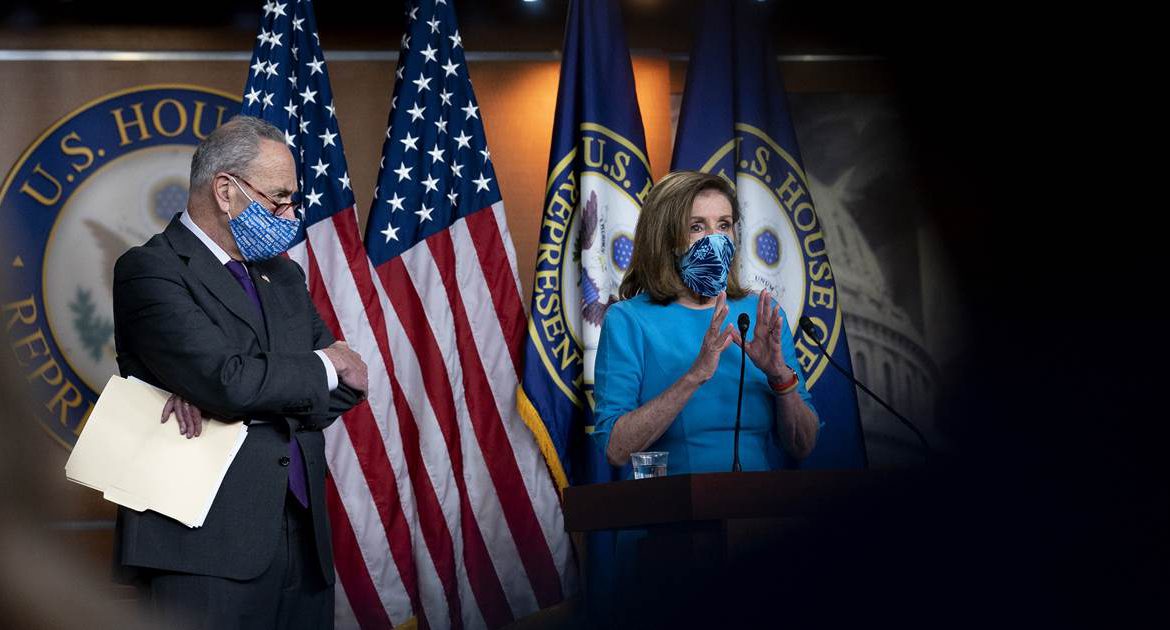 The new Mnuchin plan landed on Capitol Hill late Tuesday and could boost prospects of an agreement, as it shows that the White House is willing to back a $900 billion plan. But it also complicated efforts given that much of the focus has been on a bipartisan group of lawmakers who have been working furiously to come to an agreement on their own $908 billion proposal.

The House did agree on passing a one-week funding bill, which will now head to the Senate, to avoid a partial government shutdown and give lawmakers more time to come to an agreement on coronavirus relief.

The Mnuchin plan has some distinct differences that have been immediately rejected by Democrats. Unlike the bipartisan proposal, it puts forth a $600 direct payment for individuals and $1,200 for couples, which is half the payment delivered by the March pandemic relief bill. And while the proposal would extend federal unemployment benefits, which are set to expire at the end of the month, for up to eight weeks, it would not provide an additional enhanced weekly federal benefit of $300 that Democrats are demanding and the bipartisan group has endorsed.

In an attempt to attract the support of Democratic leaders, the Mnuchin deal would provide $160 billion for state and local aid. And it includes the Republican priority of liability protections for businesses as well as money for the popular Paycheck Protection Program, which aims to incentivize small businesses to keep workers on the payroll.

But Democratic leaders immediately rejected the proposal. In a joint statement Tuesday night reacting to Mnuchin’s offer, Schumer and Pelosi noted it was progress that Senate Majority Leader Mitch McConnell, R-Ky., endorsed the cost of the package, but they signaled that the proposal was obstructing bipartisan negotiations underway among lawmakers. The Democratic leaders also made clear that the reduction in unemployment benefits from what’s on the table is something they could never support.

“The president’s proposal starts by cutting the unemployment insurance proposal being discussed by bipartisan Members of the House and Senate from $180 billion to $40 billion. That is unacceptable,” they said.

Mnuchin said he had spoken to Pelosi on behalf of President Donald Trump and presented the plan, which he noted is larger than the $908 bipartisan proposal.

“This proposal includes money for state and local governments and robust liability protections for businesses, schools and universities,” Mnuchin said. “As part of this proposal, we will fund it using $140 Billion in unused funds from the Paycheck Protection program and $429 Billion in Treasury funds.”

On Wednesday morning, meanwhile, the lawmakers negotiating a bipartisan proposal on Capitol Hill circulated a summary of their plan, which includes $300 billion for the Paycheck Protection Program. But it leaves out the details of the two most contention issues: liability protection and funding for state and local governments as the negotiations have struggled to finalize the details of those complicated components.

Senate Majority Leader Mitch McConnell suggested Tuesday that Congress move forward without the liability and state and local components since an agreement appears elusive, but Democrats and the bipartisan negotiators rejected that idea. They continue to work to reach an agreement, with multiple meetings scheduled Wednesday between lawmakers.

The bipartisan proposal would also include $82 billion for education, $25 billion for rental assistance, $6 billion for coronavirus vaccine development and distribution and $7 billion for testing and tracing, and it would extend the student loan forbearance until the end of April.

Meanwhile, a group of progressive Democratic senators led by Bernie Sanders demanded that another round of $1,200 checks be added to the plan, with the overall price tag being $300 billion. Sen. Josh Hawley, R-Mo., said Tuesday that he spoke to Trump over the weekend about adding stimulus checks to the package.

The latest developments come as Congress is expected to take up a government spending measure that will extend the funding deadline by one week, to Dec. 18, to buy more time for these bipartisan negotiations.

Rebecca Shabad is a congressional reporter for NBC News, based in Washington.