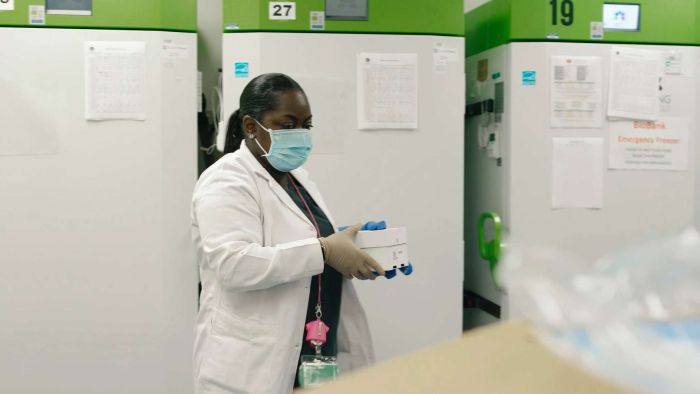 Australian health authorities are continuing to stand firm on their March timeline for vaccinations against coronavirus, despite the emergency approval of a COVID-19 vaccine in the United States.

Key points:Health authorities in Australia are sticking with their March timeline to rollout the COVID-19 vaccineExperts say we have nothing to lose by waiting a few months, but something to gainActing Chief Medical Officer Paul Kelly says Australia is in talks to secure more doses of Pfizer’s vaccine.

The US Food and Drug Administration (FDA) has authorised the use of Pfizer’s jab, with the first inoculations expected within days.

But while the United Kingdom, Canada, Bahrain and Mexico have also approved it for emergency use, Acting Chief Medical Officer Paul Kelly reiterated Australians could expect to get the COVID-19 jab in March.

“We will be doing our own full regulatory approval in a fast-tracked way but in a careful and methodical way, as we expect of our world-class regulator the TGA, in the coming weeks,” he said.

The Federal Government has been keen to stress Australia’s pandemic experience is very different to that of most other countries.

Saturday has also marked eight days straight without any community spread in Australia for the first time since February.

Vaccine expert and Westmead Institute founding director Tony Cunningham said there was no need to rush the vaccine out here.

“We’re doing very well in this country now, we’ve got to be careful we don’t get complacent, we need to continue to socially distance, to track and trace, put out the spot fires, be very careful in our quarantine capabilities, and we have an excellent and even stronger public health system now than we have had in the past,” he said.

“We’re not going to lose anything by immunising people in March next year, we may gain something by seeing what’s happening around the world.”

More Pfizer doses on the table

The Federal Government has opted to buy 10 million doses of the Pfizer vaccine from overseas in the event it’s successful, rather than produce it in Australia.

That is because the Pfizer vaccine is based on new technology, which has never been successfully manufactured or distributed locally before.

The UK’s rollout of the Pfizer vaccine, and the US emergency approval of the drug, won’t affect Australia’s timeline.(Pool via AP: Victoria Jones)

The virus that causes COVID-19 enters healthy cells using the so-called “spike” protein and many vaccines inject an amount of that protein, so the body can produce antibodies and learn to fight the coronavirus.

But Pfizer’s vaccine, developed with German partner BioNTech, contains genetic material called mRNA, which effectively comes with a DIY kit — instructions to assemble the spike protein, so the body can mount an immune response.

The vaccine was shown to be 95 per cent effective in preventing the disease in a late-stage trial, but it comes with complex distribution challenges.

It must be shipped and stored at -70 degrees Celsius, requiring specialised ultra-cold “eskies” stocked with dry ice.

Because Pfizer’s vaccine requires two doses, Australia has currently only secured enough of that jab for 5 million people.

But Professor Kelly said authorities were in talks to shore-up more doses.

“They’re on track to develop billions of doses next year and we’re in for some of those,” he said.

“The major advantage of the RNA technology that’s used in the Pfizer vaccine is it’s an extremely small dose that’s needed, so consequently a large amount of vaccine can be made very quickly, this is the major breakthrough we’ve got with the RNA vaccines.”

Australians told to ‘be realistic’ about COVID-19 vaccine

Australia’s low COVID-19 infection rate means the population will have to wait patiently for a March rollout, experts say

The Government announced additional investments in both vaccines Friday, after it scrapped its deal with Queensland University’s vaccine candidate.

The Government has previously said it’s exploring the idea of manufacturing mRNA vaccines locally, and Professor Kelly said authorities were continuing to look at the possibility.

“We don’t have mRNA vaccine production capability in Australia right now, we’re looking into that, but what we do have is an ability to make protein vaccines, we have the ability to make the viral vector vaccine which is the Oxford/Astra Zeneca product, so we’re moving ahead with those.”

Australian biotech company CSL is used to making millions of doses every year of the influenza vaccine, which is effectively a protein-based vaccine.

However, because an mRNA vaccine has never been developed in Australia, it would require a complete overhaul of production, and Science Minister Karen Andrews has said that could take up to 12 months.

Professor Cunningham said investment in RNA technology would be beneficial not just for the COVID-19 pandemic, but for all future vaccines.

“We’ve all been fascinated by the efficacy they have and in [the] short term, in these interim analyses, it’s very reassuring and promising and exciting,” he said.

“We have good RNA scientists in this country and we’re a very capable country so I think it’s a very good idea that we look at being able to produce this type of vaccine for ourselves.

“We need sovereign vaccines in all of these areas.”