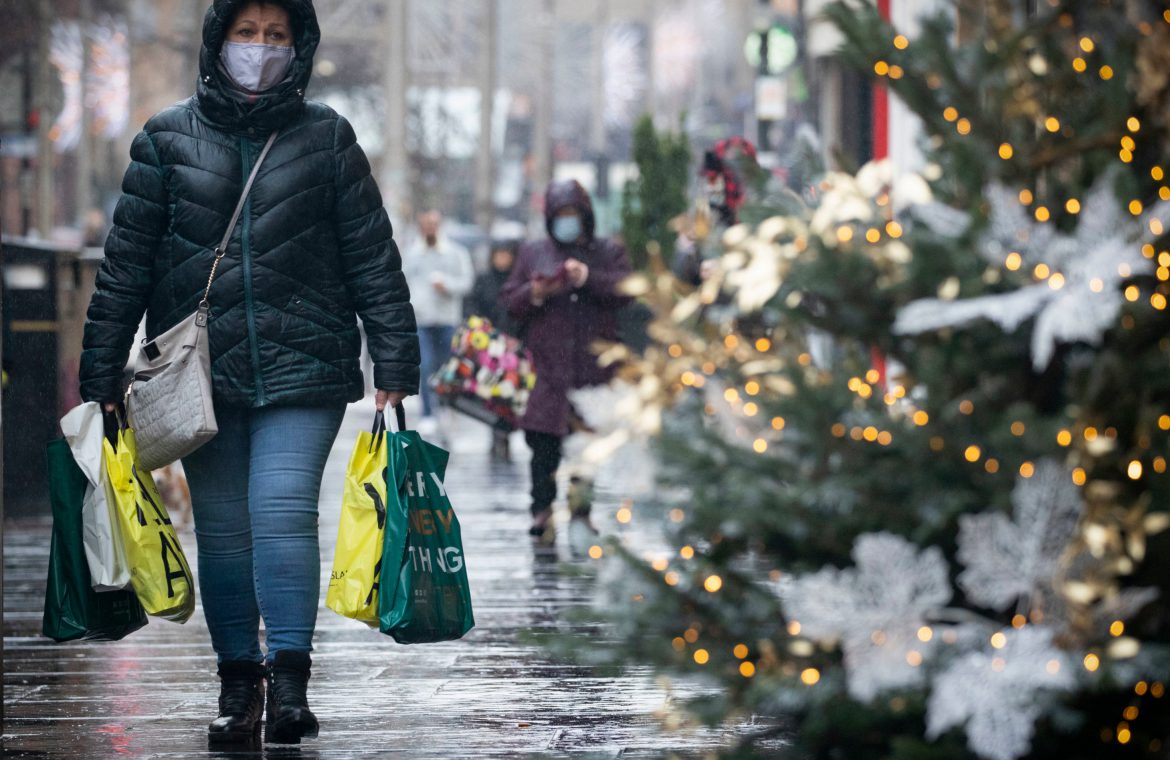 Shoppers in Glasgow, Scotland, as restrictions are eased to allow the reopening of high street stores

The UK may be “heading towards disaster” over Christmas, scientists have warned as coronavirus cases surge in parts of the country following the end of the second national lockdown.

Independent Sage said the relaxation of restrictions over a five-day festive period created a “very real danger” of a third wave of Covid-19, and one public health expert described the government’s decision as a “mistake”.

It came as the reproduction number, or R value, of coronavirus transmission across the UK crept up toward 1, with London and the southeast of England suffering the highest rate of new infections. Police have criticised “selfish” members of the public in the capital for holding illegal parties and gatherings.

Meanwhile rapid testing will be rolled out to local authorities in the highest tier of restrictions from Monday, the government has announced.

Health officials in Wales have urged people to think carefully about their Christmas plans after warning that coronavirus levels were high in nearly every part of the country.

Public Health Wales said in a statement: “If we are to have meaningful and safe interactions within the permitted exclusive Christmas ‘bubble’, then everyone should immediately start to limit their interactions with other as much as possible in the lead up to the festive period.

“This means staying out of other people’s homes, limiting the times and the numbers of people that you meet, maintaining social distancing and hand hygiene, working from home if you can, and self-isolating if you show symptoms of coronavirus or are asked to do so by contact tracers.

“As the number of cases continues to accelerate in Wales, we would also advise people to consider their plans for Christmas from the perspective of what they ‘should’ do, rather than what they ‘can’ do, in order to protect their families and communities.

“Public Health Wales urges everyone to follow the rules, to avoid transmission of Coronavirus and to protect everyone in our communities, including the most vulnerable.”

A further 476 people have tested positive for Covid-19 in the past 24 hours, according to Northern Ireland’s health department.

There were also 9 deaths recorded.

Boris Johnson has hailed a new era of “scientific optimism” at the start of the 2020 Climate Ambition Summit, five years on from the Paris Agreement.

In his opening address, the prime Minister said: “We are coming to the end of an extraordinary year with I think a sudden surge of scientific optimism, because of after barely 12 months of the pandemic we are seeing the vaccine going into the arms of the elderly and the vulnerable.

“Vaccines that are the produce, each and everyone of them, of vast international efforts in laboratories around the world and my message to you all is that together we can use scientific advances to protect our entire planet, our biosphere against a challenge far worse, far more destructive than coronavirus.”

You can follow the climate summit live at the below link:

A further 314 people who tested positive for coronavirus have died in hospital in England, bringing the total number of confirmed deaths reported in hospitals to 44,126, NHS England said.

Patients were aged between 38 and 102. All except 11, aged between 63 and 93, had known underlying health conditions. Thirteen other deaths were reported with no positive Covid-19 test result.

Meanwhile vaccinations are continuing at NHS hospital hubs across the country. One of the patients highlighted today is 86-year-old volunteer Ted.

Scotland has recorded a further 39 deaths and 1,064 positive tests, according to the latest daily coronavirus statistics from the Scottish government.

There are 994 people in hospital confirmed to have the virus, down by five in 24 hours. Of these patients, 52 are in intensive care.

The official death toll in Scotland now stands at 4,109.

Finance minister Olaf Scholz has called for the swift closure of most shops and pledged financial support for affected businesses, while Winfried Kretschmann, governor of the south-western state of Baden-Wuerttemberg, says he expects a “hard lockdown” before Christmas.

“The contact restrictions ahead of us will be severe,” tweeted Mr Scholz. “For families, children, retail and many more. Only a country that sticks together, that shows solidarity, can get through the crisis well.”

If you are planning to travel over the Christmas period, this guide from the Independent’s Simon Calder may help you decide how to best go about it.

Schools in England could face legal action if they try to switch to online learning in the run-up to Christmas.

New powers introduced through the Coronavirus Act allow the government to issue “directions” to headteachers to keep schools open.

If they fail to comply, Education Secretary Gavin Williamson could apply for a High Court injunction forcing them to do so.

It comes as a headteacher in Ware, Hertfordshire, was sent a “minded to direct” letter from schools minister Nick Gibb warning that the emergency powers could be used.

Presdales School had planned to switch to online learning for the final week of term to ensure staff and pupils did not have to self-isolate on Christmas Day, Schools Week reported.

The Department for Education (DfE) said directions under the act would only be used as a “last resort”, while a court order would be the “final stage” if they were not followed.

A spokeswoman confirmed a letter was sent to the school, adding: “They have now changed their plans as to what they are doing this term.”

Police have criticised  “selfish” people for holding parties, large weddings and unlicensed music events as London faces being placed into Tier 3 next week.

Deputy Assistant Commissioner Matt Twist, the Met’s lead for Covid-19 operations, said: “It is really saddening that in the week a vaccine finally began its roll-out to the most vulnerable, offering a ray of hope to us all, that we are facing the possibility of tougher restrictions.

“But I’m afraid the infection rates show not all of us are being careful enough. This isn’t just about keeping to the regulations, important though that is, it is about taking all the precautions we can in every aspect of our lives. The more contact we have, the higher the chance of catching or spreading the virus.

“We do understand the temptation to enjoy the festive season – after a tough year we’d really like to do so ourselves, but right now we need to come together as a city and control the virus. Our collective actions over the coming days and weeks will have very serious consequences and if we don’t change our behaviour now then people will die who could have otherwise lived – it’s that simple.

“That why it is so disappointing that we continue to see a small minority of selfish people holding parties, large weddings, unlicensed music events or poorly managed protests and although these events are not the only reason for the increase in infections, they are undoubtedly contributing to the problem.

“So we make no apology for using the enforcement powers available to us where we encounter deliberate, dangerous or flagrant breaches of the regulations like these, and our new digital fine system makes getting a fine increasingly likely for both organisers and attendees.

“We will not allow the irresponsible and selfish actions of a few jeopardise the safety of the entire city but we also urge everyone to ensure they too are taking personal responsibility to do all they can protect themselves and their community.”

The head of the Center for Disease Control and Prevention in Hanoi, Vietnam, has been jailed for 10 years for overstating the cost of Covid-19 testing systems.

Nguyen Nhat Cam, 57, caused a loss of 5.4 billion dong ($233,483) to the state budget by his wrongdoing, the Ministry of Public Security said in a statement.

Cam and his accomplices’ activities would negatively affect the image of doctors and the anti-COVID-19 agency, angering the public and undermining confidence in the healthcare sector, the statement said.

The court also sentenced nine other people to between three and 6.5 years in prison for their involvement in the matter.