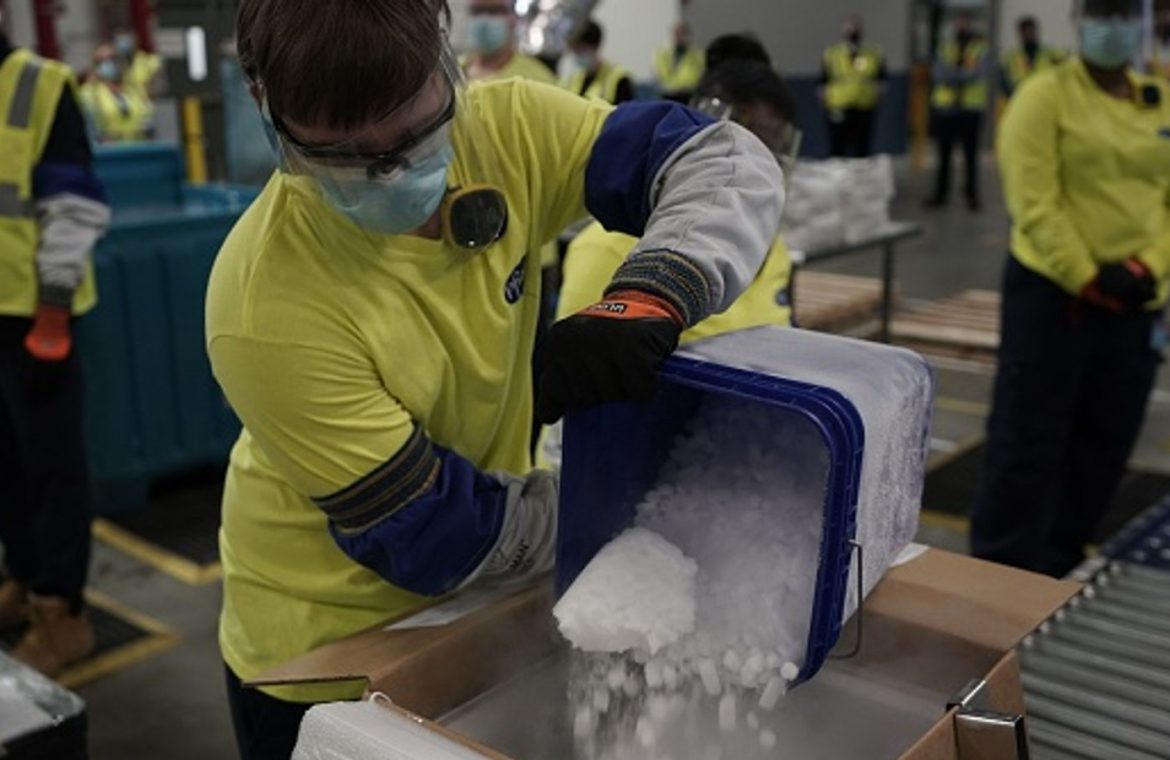 The first shipments of the Pfizer/BioNTech vaccine have left a factory in Michigan, just two days after it got safety approval in the US.

Live TV shots showed the vials being moved from the freezer to be boxed and labelled, and workers clapped and whistled as the first shipments headed onto waiting trucks.

US marshals will travel with the vaccine to its final destination.

The first stage takes it from the Pfizer facility in Kalamazoo, Michigan, to planes that will fly it to UPS and FedEx hubs in Louisville in Kentucky, and Memphis, Tennessee.

Image:
The first boxes of the vials were moved out of the freezer and into boxes on Sunday morning

Image:
Three million doses will be given in the first wave of vaccinations

From there, trucks or aircraft will ferry it to 145 sites around the country that will get the first doses.

The green light for the treatment – the first to be signed off in the US and the same one that’s being distributed in the UK – came late on Friday from the Food and Drug Administration.

Healthcare workers and care home residents will get priority for the vaccine, which requires two doses a few weeks apart.

Nearly three million shots will be given in the first wave of vaccinations.

UPS and FedEx delivery drivers will deliver the vaccine “suitcases” into the hands of medical workers on Monday morning, with some also carrying regular deliveries such as Christmas parcels.

Image:
Pfizer workers clapped and whistled as shipment of the vaccine began

Image:
Trucks will transport the vaccine onto planes, which will then fly it around the US

Three shipments are expected this week and another 400-plus sites will get the vaccine between Tuesday and Wednesday.

Local pharmacies could get the vaccine in about three weeks, said the army general coordinating the rollout, Gustave Perna, who compared the vaccine’s deployment to D-Day.

Trump on vaccine: ‘Our nation has achieved a medical miracle’

“D-Day was the beginning of the end and that’s where we are today,” said the general on Saturday.

New York state governor Andrew Cuomo made a similar analogy, telling reporters the vaccine is the “weapon that ends the war”.

However, he said he believed it would be June or later before life might get back to normal.

America’s coronavirus death count currently stands close to 300,000 – the most in the world – with about 16 million total cases recorded.