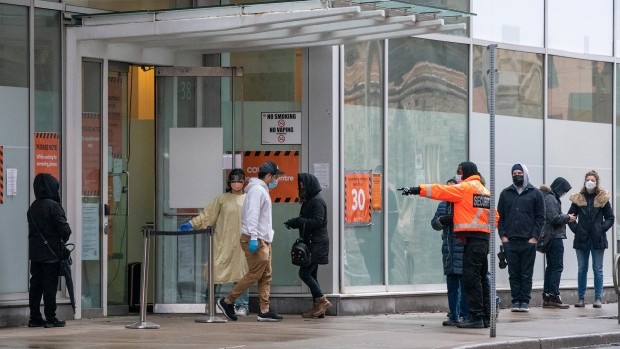 Ontario reported 1,677 new cases of COVID-19 on Sunday along with 16 new deaths, as the province’s total confirmed death toll since the pandemic began approached 4,000.

“Locally, there are 456 new cases in Toronto, 356 in Peel and 143 in York Region,” Health Minister Christine Elliott wrote on Twitter.

Sunday’s number is a marked drop from the cases detected over the past three days.

The province says 177 people have died in the past week, while the active caseload across Ontario rose by 657 people during that time.

Ten of the deaths reported Sunday involved residents of the long-term care system.

Provincial labs processed 58,190 specimens in the past 24 hours, generating a positivity rate of 3.2 per cent.

A further 51,051 specimens remain under investigation.

Overall hospital occupancy fell by 42 patients in the past 24 hours, to 813, while the number of people in intensive care rose to 253.

Of those, 142 patients were breathing with the help of a ventilator.

Dr. Zain Chagla, director of infection control at St. Joe’s Hospital in Hamilton, said Ontario’s hospital performance is being stretched in multiple areas due to the current wave COVID-19.

Larger hospitals are seeing ICU occupancy rise due to COVID-19, threatening their ability to care for patients recovering from complex surgery or other severe conditions.

They’re also being asked to send staff to nearby long-term care homes that are in outbreak, draining staff capacity.

And many of them have some staff off due to COVID-19 illness, compounding the shortage of skilled personnel needed to combat the virus on all of those fronts.

“Realistically, we’re going to have to make tough decisions as beds become harder to staff, as there are more places we won’t be able to put patients anymore, we may have to scale back,” Chagla told CP24. Those surgeries that are urgently will still get done urgently, but those that are elective, they are on the table as capacities grow and our ability to give care gets hindered.”

The latest report by Critical Care Services Ontario, obtained by CP24, showed that 267 people were in intensive care due to COVID-19 on Sunday, not 253 as reported by the province.

ICU admissions due to COVID-19 increased by 22 overnight, the highest single-day increase in admissions since the end of March.

The report also detailed the number of children receiving treatment for COVID-19 across the province.

It said that two children were in intensive care in Toronto on Sunday, as well as one baby in a neonatal unit.

Don't Miss it COVID-19: First doses of Pfizer coronavirus vaccine hit the road in US as rollout begins | US News
Up Next Murphy’s dire predictions on how coronavirus would wreck N.J. finances far from what’s actually happened so far