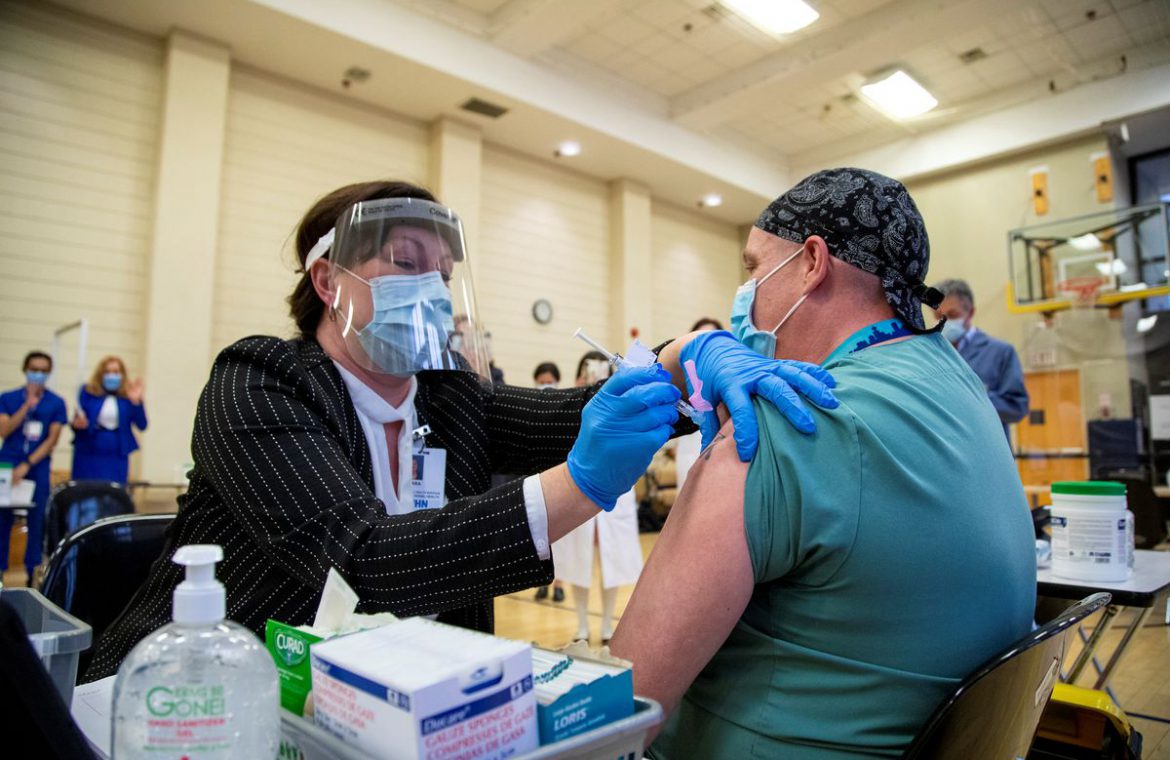 Canada’s national vaccination campaign to stop the spread of COVID-19 began with joy and relief on Monday, while challenges facing the mass inoculation plan rose to the surface as hundreds of Quebec nursing-home workers passed on the shot for now.

Gisèle Levesque, an 89-year-old resident of a Quebec City nursing home, did not flinch as she received her needle in the arm at 11:25 a.m. A short time later and about 250 kilometres to the southwest, Gloria Lallouz, 78, received her dose of the Pfizer-BioNTech vaccine at a nursing home on the west side of Montreal. Anita Quidangen, a Toronto personal support worker who has worked with seniors since 1988, received the vaccine just after noon.

“I feel happy, I feel good,” Ms. Lallouz told reporters gathered outside her nursing home after her shot. “I’ve been stuck in my room for eight months. Eight months, without leaving my room. I hope everyone gets the vaccine. It’s important to live again.”

The campaign to bring the vaccine to Canada’s 38 million people started at a rate of about six people an hour at four locations in Ontario and Quebec on Monday.

Quebec received 4,875 doses this week, and Ontario got 6,000. Each Quebec site planned 150 injections on Monday and to ramp up to 500 a day, while Ontario started with five vaccinations in Toronto. Other parts of the country expect to begin vaccinating people later in the week.

In Montreal, Ms. Lallouz and most of the other 326 residents of the Donald Berman Maimonides Geriatric Centre in Montreal enthusiastically welcomed the vaccine, but workers proved more reluctant. While 95 per cent of residents signed up, only 35 per cent to 40 per cent of the home’s 500 workers did, according to Francine Dupuis, associate chief executive officer of the west-central health district of Montreal Island.

“They’re not against it, they’re hesitant. They don’t want to be first,” Ms. Dupuis said. “They said, ‘Yes, but not now. We’ll wait for the next wave when we see how people react.’ ”

Mr. Dubé said he is not concerned. “I don’t think we should read too much into those numbers,” Mr. Dubé said. “In the first groups we will see the most enthusiastic people. In coming weeks, I’m convinced more will sign up.”

The public shows more interest in getting vaccinated quickly, according to a poll from the Angus Reid Institute. Results published on Monday showed 48 per cent of Canadians want to be vaccinated as soon as possible, a rise of eight percentage points from one month earlier. Seventy-nine per cent of Canadians said they would get vaccinated soon or eventually, a rise of three percentage points from one month earlier.

Noni MacDonald, a Dalhousie University professor who researches vaccine safety and policy, said it’s normal for some people to hesitate.

“For anything that’s new, it doesn’t matter if it’s technology, a health care intervention, a different car, whatever, there are early adopters, and there are people who want to wait and watch. It doesn’t surprise me that there’s some health care workers who want to wait and watch,” Dr. MacDonald said. But she added she was surprised by the number, because the vaccine is an important way for workers in health care facilities to protect themselves.

The federal public-health agency is planning an education campaign for the new year to target priority groups. Spokesperson Natalie Mohamed said the campaign will cover vaccine safety, the regulatory process, and the need to continue to follow public-health advice to limit the spread of COVID-19.

That campaign should target Canadians where they get their information, Dr. MacDonald said.

“Seniors are not on TikTok,” Dr. MacDonald said. “So how I might want to reach a 20- to 30-year-old is very different than how I would want to reach an over-80-year-old.” Similarly, she said some new Canadians and refugees are less likely to trust a government message, so the campaign has to be adapted.

On V-Day, a reminder of how Canada failed to prepare for an inevitable pandemic

Federal officials could not give a precise timeline for the arrival of 249,000 doses expected by the end of the month. Canada is to receive 30,000 doses this week, but officials are less certain about 30,000 that had been scheduled for next week.

“We’re not expecting 30,000 next week,” said Major-General Dany Fortin, who is leading the logistics for the Public Health Agency of Canada. “But at this time, I’m not prepared to speak to the exact numbers.”

Christina Antoniou, a spokesperson for Pfizer Canada, said the company will be able to “deliver on our full committed volume and meet the needs of Canadian vaccination points by the end of the month.”

Ontario Premier Doug Ford warned Ontarians of the long road ahead, asking people to follow public-health rules in the meantime. “This is a watershed moment — the beginning of the end of this terrible pandemic,” Mr. Ford said.

The province intends to vaccinate 2,500 health care workers in hospitals and long-term homes this week and save the rest of the vaccine for the second dose required in three weeks. The Ontario vaccine went to Toronto’s University Health Network and The Ottawa Hospital.

Quebec plans to give out all of its first shipment as first doses, concentrating on nursing home residents and workers.

B.C. Provincial Health Officer Bonnie Henry said she expects the vaccine to be available to health care workers at nine sites next week, with plans to expand to 30. Alberta Health Minister Tyler Shandro expected his province to have eight vaccination sites in coming weeks.

With a report from Andrea Woo