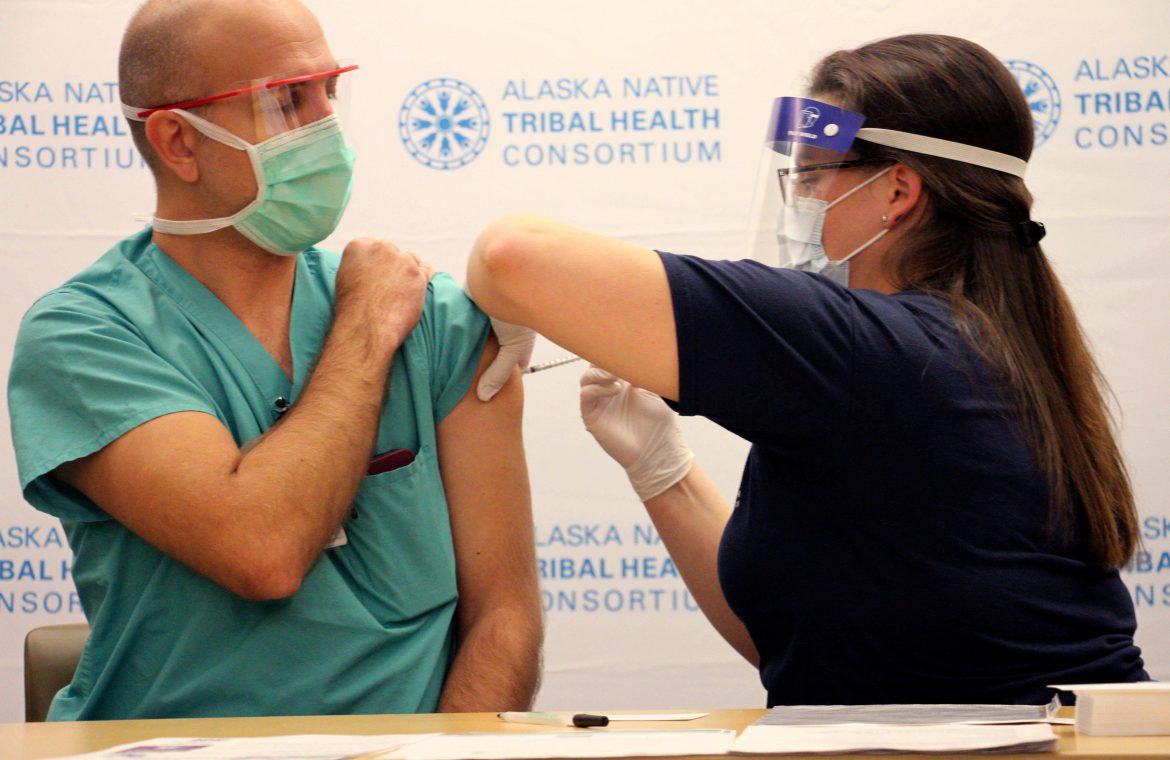 The person was reportedly in the hospital as of Wednesday under observation due to the reaction, according to three people familiar with reports of the person’s health.

Government officials are now scrambling to understand more about the individual and their reaction to the vaccine, and the report comes after two individuals in the United Kingdom also experienced an allergic reaction to Pfizer’s Covid-19 jab last week.

This individual in Alaska has no history of drug allergies, the newspaper reported, but it was not yet known if they suffered from other severe allergies.

Pfizer said in a statement to The Independent: “We don’t yet have all the details of the report from Alaska about a potential serious allergic reaction but are actively working with local health authorities to assess. We will closely monitor all reports suggestive of serious allergic reactions following vaccination and update labelling language if needed.”

The company added the vaccine came with a “clear warning” that “appropriate medical treatment and supervision should always be readily available in case of a rare anaphylactic event following the administration of the vaccine”.

Fears about the potential allergic reaction individuals could experience from Pfizer’s vaccine started following reports last week of two individuals in the UK who suffered a reaction, the country’s National Health Service reported.

This wording was later updated for the MHRA to recommend for anyone who has ever had an anaphylactic reaction to a food, medicine, or vaccine to avoid the jab, which was a “very rare” reaction among the public.

On Thursday, ahead of Pfizer receiving emergency use authorisation for its vaccine from the Food and Drug Administration (FDA), several experts during an independent panel expressed concern about what these reports of allergic reactions could mean if the vaccine was rolled out.

Pfizer officials said they saw no serious allergic reactions among volunteers who received the vaccine in the company’s clinical trials when speaking to the FDA’s Vaccines and Related Biological Products Advisory Committee – an independent panel commissioned to discuss and vote on if they would support emergency use authorisation of the vaccine.

“Amongst the 44,000 subjects, we saw no serious allergic reactions to the vaccine,” Dr William Gruber, senior vice president of vaccine clinical research and development at Pfizer, said.

“Within the clinical trial we’ve actually not seen evidence to suggest a signal related to allergic reaction to the vaccine,” he added.

But Pfizer excluded from its clinical trial anyone who had a history of severe allergies such as ones related to adverse reactions associated with a vaccine.

Dr Paul Offit, director of the Vaccine Education Center at Children’s Hospital of Philadelphia, said he was worried about what this information could mean for the millions of Americans who suffer from severe allergies.

“There are tens of millions of people in this country who carry EpiPens with them — because they have peanut allergies, because they have egg allergies — who are going to believe now that they can’t get this vaccine,” Dr Offit, a voting member of the panel, said at the time. “That’s a lot of people.”

The FDA has required Pfizer to increase its monitoring of anaphylaxis and report the data as it comes in during vaccine distribution amid reports of allergic reactions. The Centres for Disease Control and Prevention (CDC) said last weekend that those with severe reactions could be vaccinated, but they should be monitored for 30 minutes after receiving the vaccine.

Don't Miss it Brisbane Youth Detention Centre COVID-19 case 'had no symptoms' and so kept working | ABC News
Up Next 292 new COVID-19 cases, 15 more deaths in Manitoba on Wednesday