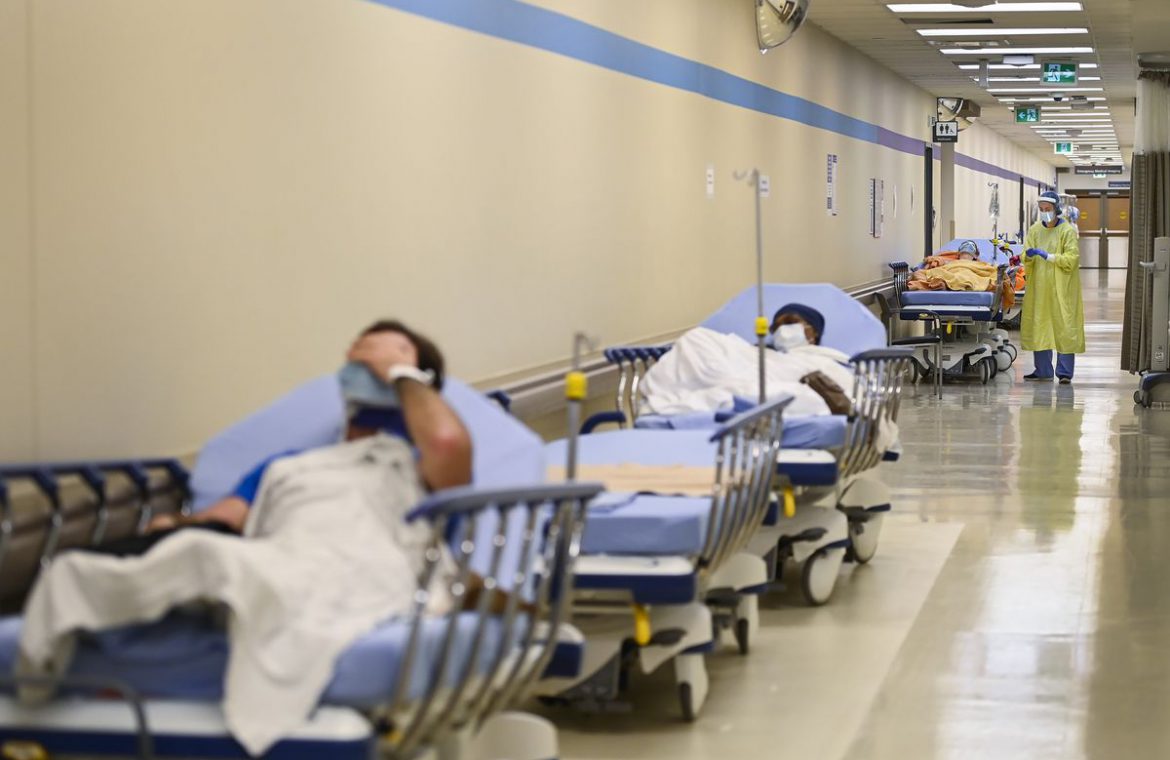 Patients lay on stretchers in the hallway of the emergency department as the unit was at maximum capacity at the Humber River Hospital in Toronto, on Dec. 9, 2020.

Citing an “extremely serious” situation that risks overwhelming the health care system, the Ontario Hospital Association on Thursday called for more regions to be locked down and for even stricter restrictions to be considered. The province on Thursday reported a record 2,432 new COVID-19 cases, with 919 people currently in hospital – down slightly from the day before – and 263 in intensive care units.

Premier Doug Ford called the situation in hospitals a concern and told reporters that “every option is on the table,” but he said there are many factors to weigh in a lockdown, including the availability of childcare, isolation facilities for those who test positive and help for struggling small businesses.

How many coronavirus cases are there in Canada, by province, and worldwide? The latest maps and charts

Is my city going back into lockdown? A guide to COVID-19 restrictions across Canada

When will Canadians get COVID-19 vaccines? The federal and provincial rollout plans so far

“I will not hesitate to do whatever it takes to slow down this trend that we see and get it back well within the numbers that we can control in our hospitals.”

Earlier on Thursday, when asked about extending school breaks, Health Minister Christine Elliott said the province is looking at all options. However the government has repeatedly said its priority is keeping schools open.

Mr. Ford’s cabinet is set to meet Friday to discuss new restrictions, including whether more regions should be moved into lockdown zones, although the government is not expected to announce if it is imposing any widespread restrictions until next week.

Currently, four regions of the province are in lockdown, including Toronto and Peel Region, whose 28-day lockdowns expire on Monday at 12:01 a.m. York Region and Windsor-Essex were also moved into lockdown last week, which means all non-essential businesses and personal care services are closed, although big-box stores can remain open.

Mr. Ford on Thursday said he is particularly concerned with the Greater Toronto Area and Hamilton, but not the west Toronto suburb of Halton.

The board of the Ontario Hospital Association (OHA), which includes 18 current and former hospital leaders, on Thursday called for a four-week lockdown in every public-health unit with an infection rate of 40 per 100,000 population or higher. That would mean about 15 of the province’s 34 public-health units, including the entire Greater Toronto Area, would be closed to all but essential businesses over the holidays.

The OHA also recommended that the grey lockdown zones of the province’s framework – the zones with maximum restrictions – be “rapidly re-evaluated” by independent public-health and epidemiologists to determine if additional, stricter measures are necessary.

Anthony Dale, president and CEO of the OHA, said there is growing concern in the health care community about the impact of the holiday season on hospitals.

“If we see widespread decisions to ignore public-health advice, we’re in for a moment of historic difficulty in Ontario’s hospitals,” he said. Mr. Dale said the OHA is not making specific recommendations around what stricter measures might entail, but he said they could perhaps include implementing curfews or enforcing limits on private gatherings. Mr. Ford said Ontario was not considering a curfew at this time.

Ontario’s Chief Medical Officer of Health, David Williams, said he and provincial health experts had made recommendations to the government but would not say on Thursday what they were. He said he’s spoken to the medical officers in Toronto and Peel, which includes Brampton and Mississauga, to see if the lockdown zones need to be a “darker shade of grey,” meaning more restrictions.

Still, Dr. Williams said the province is doing everything possible to keep schools open, which he said has been quite successful. However, he said elementary schools are different from secondary schools, with transmission higher among older students in the community.

Meanwhile, Toronto Mayor John Tory on Thursday said talks between local and provincial officials on what to do next were continuing, and he believed a regional approach across the Greater Toronto Area was needed to keep people from crossing municipal boundaries to shop.

He said lengthening the winter school break into January was an option, as was a stronger recommendation for office workers to stay home.

While Mr. Tory said non-essential retailers should still be allowed to offer curbside pickup and delivery, he argued that any new rules should also address the “inconsistency” of allowing big-box retailers such as Walmart to stay open while selling a range of goods because they also offer groceries.

“We need to provide fewer places for people to go, recognizing they have some real necessities,” Mr. Tory said.

The initial COVID-19 vaccinations in Canada and around the world raise questions about how people react to the shot, how pregnant women should approach it and how far away herd immunity may be. Globe health reporter Kelly Grant and science reporter Ivan Semeniuk discuss the answers. The Globe and Mail

With a report from Jeff Gray in Toronto

Sign up for the Coronavirus Update newsletter to read the day’s essential coronavirus news, features and explainers written by Globe reporters.