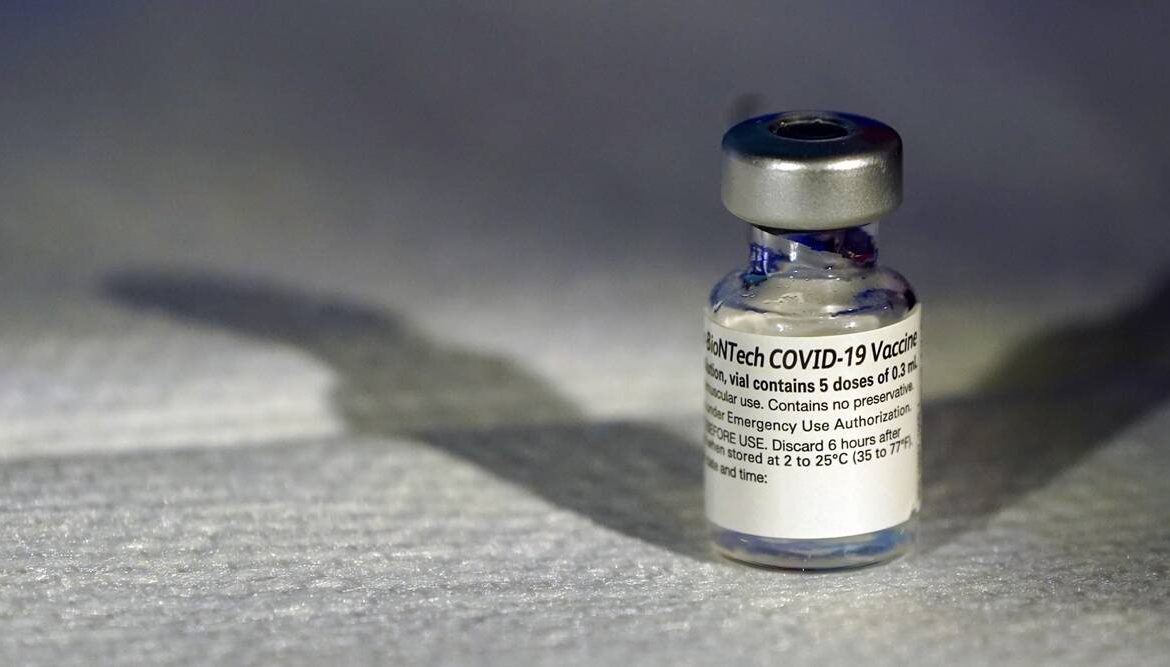 A vial of Pfizer’s COVID-19 vaccine that receivedemergency use authorization is seen at George Washington University Hospital, Monday, Dec. 14, 2020, in Washington. (AP)

Covid-19 Vaccine: As the Covid-19 pandemic continues to wreak havoc globally, with another wave expected in Europe during Christmas, at least 8 countries have begun or granted approval for vaccinating their people against the virus.

On November 18, the vaccine developed by US manufacturer Pfizer and German biotechnology company BioNTech became the first in the world to release full late-stage trial data. Britain was the first to approve the shot for emergency use on December 3, followed by Canada on December 9 and the US Food and Drug Administration (FDA) on December 11. Apart from Pfizer, Moderna became a close second in many countries after it released a full data analysis for a late-stage trial on November 30 showing a 94.1 per cent efficacy rate for its vaccine.

As people across the world begin to roll up their sleeves for the coronavirus vaccine, here’s a look at which country has approved which vaccine

Following a two-month-long review, Switzerland Saturday became the latest country to approve the Pfizer-BioNTech vaccine for use.

“After a meticulous review of the available information, Swissmedic concluded that the Covid-19 vaccine from Pfizer/BioNTech is safe and that its benefit outweighs the risks,” the Swissmedic regulatory authority said in a statement.

A vial of the Pfizer-BioNTech COVID-19 vaccine. (AP)

It is the first vaccine against the new coronavirus authorised so far in the country.

The United States Friday added a second Covid-19 vaccine to its arsenal after FDA authorised an emergency rollout of the vaccine developed by Moderna Inc. and the National Institutes of Health.

The move also marks the world’s first authorisation for Moderna’s Covid-19 vaccine. According to the Associated Press, the vaccine is very similar to one from Pfizer Inc. and Germany’s BioNTech that’s now being dispensed to millions of healthcare workers and nursing home residents as the biggest vaccination drive in US history starts to ramp up.

Compared to Pfizer, the vaccine produced by Moderna’s is easier to handle since it does not need to be stored at ultra-freezing temperatures. The vaccine can be stored for up to six months at -20 degrees Celsius, though it is expected to be stable for 30 days at normal fridge temperature of 2 to 8 degrees Celsius (36 degrees Fahrenheit to 46 degrees Fahrenheit). Early results of large, still unfinished studies show both vaccines appear safe and strongly protective.

The United States so far has been the worst-affected country by the coronavirus pandemic. The scourge has claimed more than 3,12,000 US lives and 1.7 million people worldwide. New cases in the US are running at over 216,000 per day on average. Deaths per day have hit all-time highs, eclipsing 3,600 on Wednesday.

Malaysia on Saturday said it expects to receive the first batch of the Covid-19 vaccine jointly developed by Pfizer and BioNTech in February, news agency Reuters reported.

In November, Malaysia had announced that it had agreed to buy 12.8 million doses of the vaccine, becoming the first country in Southeast Asia to strike a deal with the US drugmaker. Under the deal, Pfizer will deliver the first one million doses in the first quarter of 2021, with 1.7 million, 5.8 million and 4.3 million doses to follow in subsequent quarters.

The Malaysian government also said that they are in talks with other pharmaceutical companies to secure more vaccines.

“The government is making efforts to get a bigger supply of vaccine to meet our needs. The government will take the advice of the Health Ministry regarding the percentage of people who need to be vaccinated,” Trade Minister Mohamed Azmin was quoted as saying by Reuters.

On December 8, the United Kingdom became the first country in the world to administer Covid-19 vaccine to its public. The first recipient of the vaccine developed by Pfizer-BionTech was 90-year-old Margaret Keenan. She received the shot at University Hospital Coventry at 6:31 a.m. Keenan said she felt “so privileged to be the first person vaccinated against Covid-19.

Margaret Keenan, 90, is applauded by staff as she returns to her ward after becoming the first patient in the UK to receive the Pfizer-BioNTech COVID-19 vaccine, at University Hospital, Coventry, England, Tuesday Dec. 8, 2020. (AP)

According to BBC, it was the first of 800,000 doses of the vaccine that will be dispensed in the coming weeks.

In England, the vaccine will be delivered at 50 hospital hubs in the first wave of the programme, with more hospitals expected to offer it as the rollout ramps up. Northern Ireland, Scotland and Wales are making their own plans under the UK’s system of the devolved administration.

The country has placed orders for nearly 40 million doses — enough for 20 million people, as two courses are needed. However, most supplies are not expected to become available until next year.

Another vaccine being developed by Oxford-AstraZeneca in the UK has also been found to be “safe and effective” and is being currently assessed by independent scientists.

Following in Britain’s footsteps, the island kingdom of Bahrain on December 4 became the second nation in the world to grant an emergency-use authorisation for the coronavirus vaccine made by Pfizer-BioNTech. The country has offered citizens the option to pre-register to receive the vaccine on its website.

A droplet falls from a syringe after a health care worker is injected with the Pfizer-BioNTech COVID-19 vaccine. (AP)

On December 13, the country also announced the approval of a vaccine developed by Sinopharm Group, a Chinese government-owned pharmaceutical company. According to a report in The Guardian, Sinopharm is among two Chinese pharmaceutical companies (the other is fellow frontrunner Sinovac) to have created their vaccine via the more traditional method of using an inactive virus to trigger an immune response.

Sinopharm’s shot relies on a tested technology, using a killed virus to deliver the vaccine, similar to how polio immunizations are made. Leading Western competitors, like the shot made by Pfizer and its German partner BioNTech, use newer, less-proven technology to target the coronavirus’ spike protein using RNA.

However, the country offered few details on study results of the vaccine, in line with the United Arab Emirates, which last week announced the vaccine was 86% effective. According to the Bahrain government, over 7,700 people signed up to take part in a trial of the Sinopharm vaccine in the kingdom.

In an effort to beat the pandemic, Canada administered its first doses of a Covid-19 vaccine on December 14. Five front-line workers in Ontario were among the first Canadians to receive the Pfizer-BioNtech vaccine at one of Toronto’s hospitals.

The Canadian government had recently amended its contract with Pfizer and BioNTech so that it would deliver up to 249,000 doses in December itself. As per AP, more of Canada’s initial 30,000 doses of the vaccine are expected to cross the border by Monday.

Anita Quidangen, a personal support worker who worked throughout a COVID-19 outbreak at the Rekai Centre nursing home in Toronto, got the first dose in Ontario.

Canada Prime Minister Justin Trudeau and a man who had just received the Pfizer-BioNTech COVID-19 vaccine elbow bump as the Prime Minister toured a vaccinations clinic at the Ottawa Hospital with Minister of Health Patty Hajdu, Tuesday, Dec. 15, 2020, in Ottawa. (AP)

The country has contracts with six other vaccine makers and is currently reviewing three other vaccines, including one by Moderna that Canadian health officials said could be approved soon.

Canada has ordered more doses than needed for Canadians but the government eventually plans to donate excess supply to impoverished countries.

The Mexican government has inked an agreement with Pfizer to acquire 34.4 million doses of its vaccine, with the first batch expected to arrive this month.

The country has so far reported 1.3 million coronavirus infection and over 1,17,000 deaths.

While Pfizer’s shot was the first to be rolled out following the publication of full Phase III trial data, Russia and China have been inoculating their citizens for months with several different vaccines still undergoing late-stage trials.

On November 24, Russia said that its Sputnik V vaccine, developed by the Gamaleya Institute, was 91.4 per cent effective based on interim late-stage trial results. It started vaccinations in August and has inoculated more than 100,000 people so far.

People wearing face masks to help curb the spread of the coronavirus walk by a moral depicting China’s skyscrapers along a street in Beijing, Sunday, Dec. 6, 2020. (AP)

On the other hand, China on December 18 announced its plan to vaccinate 50 million people in the high-priority group against the coronavirus before the start of the peak Lunar New Year travel season early next year.

The country has so far granted emergency-use status to two candidate vaccines from Sinopharm and one from Sinovac Biotech. It has also approved a fourth, from CanSino Biologics Inc, for military use.

According to a report published in the South China Morning Post, Chinese officials have been asked to complete the first 50 million doses by January 15 and the second by February 5.