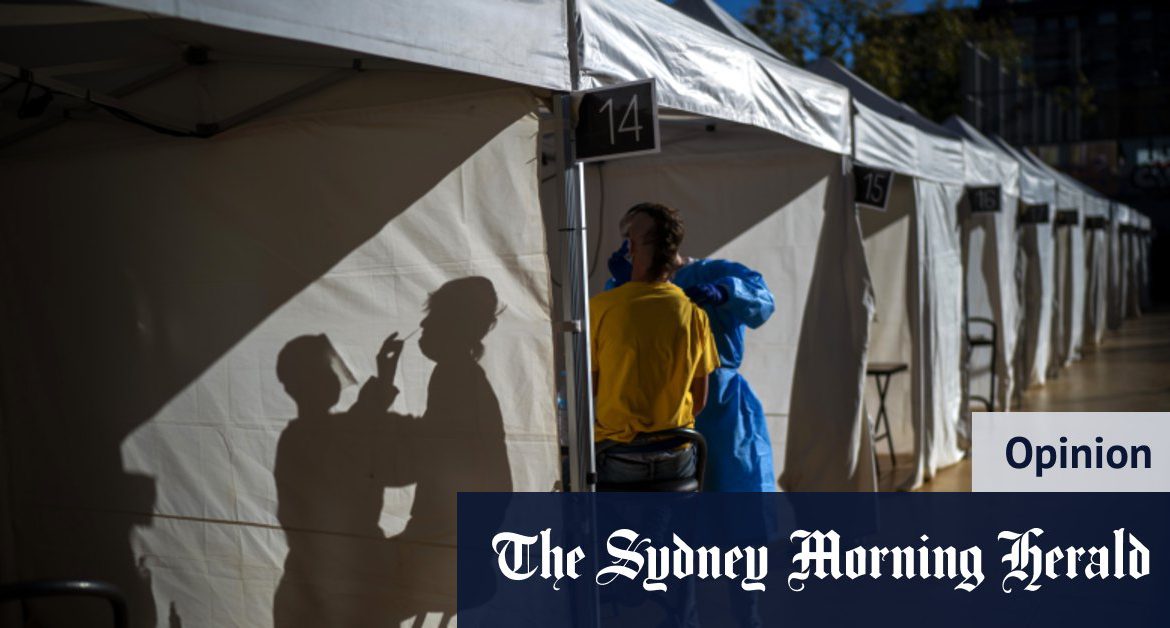 Now is the time for federal and state health authorities to include rapid antigen “point of care” testing, which takes 15 minutes to perform, on all staff at the end of their work shift. We need to send staff home with a high degree of certainty that they are really negative.

These tests have a high level of accuracy for identifying those who truly are negative for COVID-19 with total accuracy of about 98 per cent. Daily rapid antigen testing of quarantine hotel staff and airport staff (with close proximity to travellers), and taking rapid action on positive cases, has been demonstrated as superior to single sample testing in reducing transmission. These daily tests add a layer of certainty for the prevention of seeding into the community from high-risk locations that is currently missing.

Rapid antigen testing has the potential to remove the need for lockdowns, like the one on the northern beaches.Credit:James Brickwood

Travellers exempt from quarantine are also a weak link in the current defences. Foreign flight crew, Australian flight crew, diplomatic staff and anyone with approval to isolate at home without first being tested at the airport place the community at risk. The only defence now is placing foreign flight crew in a quarantine hotel – which has not previously been required.

A layer of assurance for the community would include all Australian crew, diplomatic staff and locals isolating at home to be tested on arrival and isolate until identified as COVID negative at least a second time.

A positive test would initiate a confirmatory rtPCR test and the individual would be required to remain isolated until a negative result is obtained. All rapid testing should follow accepted protocols and be conducted by trained healthcare professionals.

A take-home rapid antigen kit (such as those recently approved for use by the US Food and Drug Administration) would allow this group the ability to test again at home to ensure they are not in the early stages of COVID-19 and could alert the authorities to the need for vigilance should a result become positive.

Flight crew and anyone with approval to isolate at home, without first being tested, place the community at risk.Credit:Bloomberg

Currently, all travellers arriving at large cities are quarantined in the CBD. Travellers from the northern hemisphere have an ever-increasing risk of infection as Europe, Britain and the US experience second and third waves. Testing all travellers before they leave the airport would then enable transfer to a medi (COVID positive test) or non-medi (negative test) quarantine hotel.

The hotel environment is not designed to contain a highly transmissible infection spread via exhaled particles. Being able to cohort travellers from the first test at the airport would help in choosing the most appropriate building environment for positive cases.

Those travellers with a positive test result would have an immediate confirmatory PCR test and moved to a location that can deal with a highly infectious disease. These steps add further layers of defence.

There is enough evidence available now to support repeat, rapid antigen testing as a screening test in certain settings. Reports published in The New England Journal of Medicine and by a group from Harvard Medical School have highlighted the benefits of repeat testing and taking rapid action as a superior strategy to single sample testing.

These tests can also protect vital Australian industries such as resources, agri-food and tourism in case of future outbreaks rather than resorting to widespread lockdowns.

We urge Australian governments and health authorities to consider this new testing regimen to ensure Australians can be together at Christmas, while the community is kept safe.