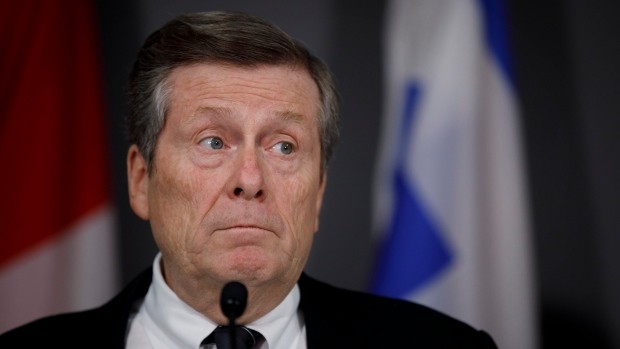 Reflecting back on a year that has been like no other in Toronto’s history, Mayor John Tory said that while there is still much work ahead to defeat the COVID-19 pandemic he is confident that the city will eventually come back stronger than ever.

Speaking with CP24 for a year-end interview Tuesday, Tory conceded that managing the pandemic has not been without “complications” but said that there are bright days ahead for the city.

“If you said, am I fearful for the future Toronto, not at all. This place is going to get back to where it was as one of the most successful cities in the world,” Tory said.

Since COVID-19 shuttered workplaces, cancelled large gatherings and created an unprecedented health emergency in March, Toronto has looked like a different place from its regular bustling self.

Subway ridership has plummeted, many businesses and public spaces have been closed and residents have had to adapt to an ever-shifting slate of health safety rules and restrictions.

Asked in particular about the downtown core, which has seen a significant reduction in daily visitors and commerce since the pandemic started, Tory said the “fundamentals” of the city remain strong.

“The fundamentals of all of Toronto are such – with smart people, good education, educational institutions, great industries, great arts and culture, great values – that people will be flocking to come to this city again once the pandemic is over,” Tory said.  “Investment will be coming here and people will start to come back downtown because there’s too much going on not to come downtown but that’s going to take some time.”

The mayor pointed out that credit rating agencies have also pointed to a strong future ahead for the city recently.

“They reaffirmed it at a high level, they said this city had a bright future. And they said it was prudently financially managed and that was music to my ears, all of those things because that’s what we’re trying to do and what we will continue to try to do,” Tory said.

He said his biggest concern in terms of how the pandemic might reshape the city is the loss of small businesses and called some of the decisions he’s had to make alongside the premier about restricting businesses “agonizing.”

“I mean it’s agonizing because you would love to find some answer to fighting this virus that didn’t hurt people,” Tory said.

Many small businesses that have been hard-hit by the pandemic have decried the fact that large big box stores are allowed to remain open while they have been forced to close.

“There was an inconsistency there which I acknowledged early on. I wasn’t comfortable with it but, again, the province had these difficult decisions to make. They made it based on the medical advice they got and here we are,” Tory said.

He added that while he supported the provincial measures, they were not meant to “punish” businesses or blame them for the spread of the virus.

“We needed to reduce the number of places people had to go. We need people to stay home and sometimes the only way you can achieve that is to have fewer places for them to go. So I think they’ve done their best, I think we’ve all done our best in the face of a virus that had a lot of unknowns.”

Tory pointed out that “every other major global city in the world” has enacted some sort of restrictions to curb COVID-19 and Toronto is no exception.

While he acknowledged that there is no perfect solution to the problems that the pandemic has posed, Tory said that the different levels of government have done a good job of working together to face them.

“They both (Ottawa and Queen’s Park) have been nine out of 10 partners that have been there when we needed them to work together.

“You know, one of the really important things I think in Canada and I’ll say Ontario, Toronto, Canada, is that we avoided division between and among the leaders that was on display in places like the U.S. where I think that was damaging. We relied on the experts and we didn’t try and second guess them and pretend that we as politicians knew more than the medical people or the scientists.”

On the flip side, Tory said one of the hardest parts of managing the pandemic has been dealing with people who refuse to follow the rules.

“It’s very frustrating, and it’s frankly frustrating for me more so than anything else because those people are quite literally – it’s not an exaggeration to say it – putting other people’s lives at risk,” Tory said.

He likened those breaking the health safety rules around the pandemic to distracted or drunk drivers.

“You are putting other people’s lives at risk when you do things like have parties and have social gatherings and so on in the face of the spread of this pandemic,” he said.  So it’s very frustrating but I mean you just have to deal with it as best you can and have a series of rules and communications that hopefully make it clear what the guidance is and then hope most common sense people follow it.”

Looking forward to 2021, Tory said the biggest challenges for the city will be getting the pandemic under control, followed by the housing and mental health crises and managing the city’s finances, which have taken a thrashing.

“I have to really roll up my sleeves and really get down to work on making sure we help business and others labor movements to get back to a strong economy so people are working and have jobs and the city is booming like it was before and that we keep the finances in order,” Tory said.  “But I would say pandemic, affordable housing, supportive housing and the economy are the things that will take up my time as they have been but I’m really going to have to have laser focus on those things in 2021 and beyond.”