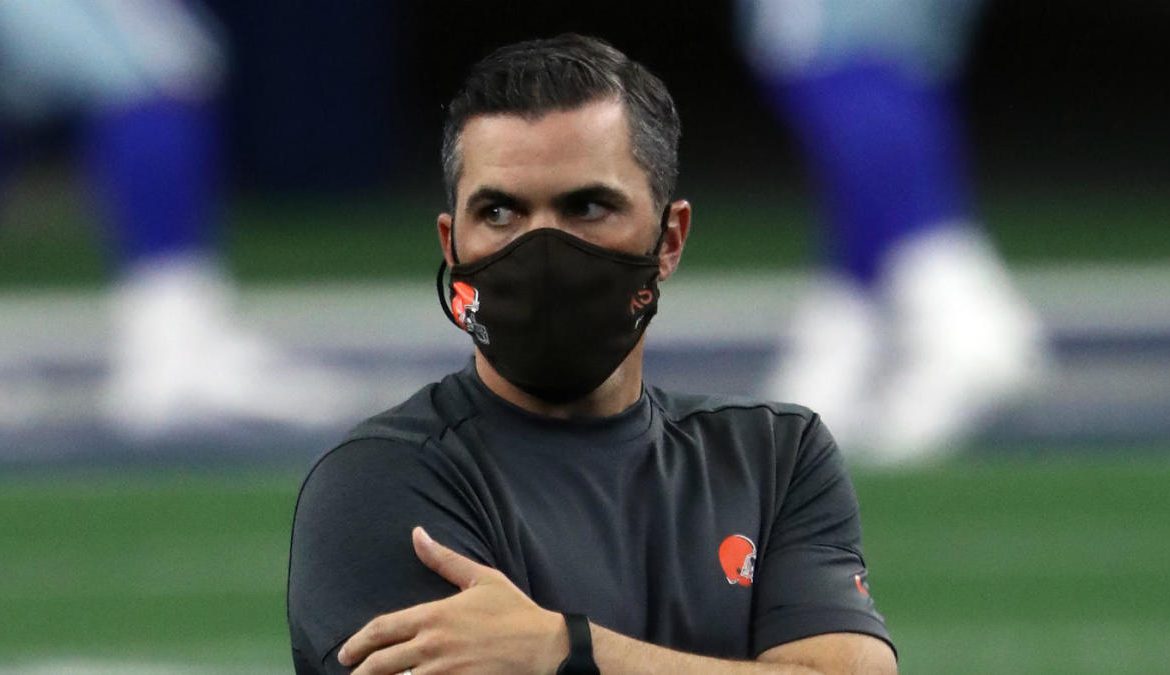 The Browns have experienced some unexpected turbulence on their way to New Jersey for Sunday’s game against the Jets. Less than 24 hours before Cleveland is scheduled to kick things off at MetLife Stadium, the team announced that it has delayed its flight after a player tested positive for COVID-19. The Browns have also closed their facility while contact tracing is underway.

Cleveland is holding meetings remotely as it “continues to consult with the NFL and medical experts on the appropriate next steps as the health and safety of our players, coaches, staff and the entire community remains our highest priority.”

Arguably even more dire: All three of the Browns’ top wide receivers — Jarvis Landry, Rashard Higgins and Donovan Peoples-Jones — have since been ruled out for the Jets game after landing on the COVID-19 reserve list. The wideouts were initially deemed high-risk close contacts to the virus but are now ineligible to suit up.

“The Browns figure to lean on the running game even more than usual in Week 16 with their WR absences,” says CBS Fantasy analyst Chris Towers, who writes the daily Fantasy Football Today newsletter. “That should mean your usual allotment 10-15 carries for Kareem Hunt and 15-20 for Nick Chubb, but it should also mean more a higher target share for both, especially Hunt who improves in the RB2 standings for Week 16.

“The same should be true for Austin Hooper and David Njoku, who face an incredibly matchup against a Jets defense that is worst in the NFL against tight ends. Hooper is a worthwhile streaming TE, while Njoku is worth a look in deeper leagues as well. However, it’s worth keeping in mind that the Browns could just decide to run the ball 40 times this week; Baker Mayfield has thrown 25 or fewer passes five times, and has some serious downside without his top weapons. He falls back to the QB2 group.”

Given Sunday’s currently scheduled 1 p.m. kickoff time, the NFL may ultimately move the game to a later date on Sunday in order to give the Browns more flexibility as it relates to traveling. Several teams this season have traveled on the day of their game due to complications caused by COVID-19. The most recent team to do this was the Steelers, who traveled to Buffalo hours before falling to the Bills on “Sunday Night Football.”

Browns pass rusher Myles Garrett, who missed two games after testing positive for COVID-19, said recently that he is still feeling the effects of the virus. Garrett was recently named to his second Pro Bowl after recording 11 sacks and four forced fumbles in 12 games.

“He continues to work hard,” receiver Jarvis Landry recently said of Garrett, via Mary Kay Cabot of Cleveland.com. “Even today, he was getting back to the quarterback and we are having to stop practice pretty much because he is so disruptive. That’s part of who he is. He’s a tough player, he loves the game of football, he loves this organization and he loves this community.

“That’s something he has a lot of pride in. Him playing through whatever he’s going through, it doesn’t surprise me. Again, we are grateful to have a guy like that who’s willing to put the team before himself in a sense, but mostly, we want him to be healthy to be able to help us.”

Cleveland (10-4) can clinch a playoff berth on Sunday with a win and loss by the Ravens, Dolphins and Colts. If the Browns win and the Steelers fall to the visiting Colts, Cleveland’s Week 17 visit to Pittsburgh will determine which team will win the AFC North division title. The Browns have not made the postseason since 2002, and are searching for their first division crown since 1989.

Don't Miss it How much COVID-19 risk is there in these common winter activities?
Up Next Qld Police investigate virus-infected superyacht | ABC New