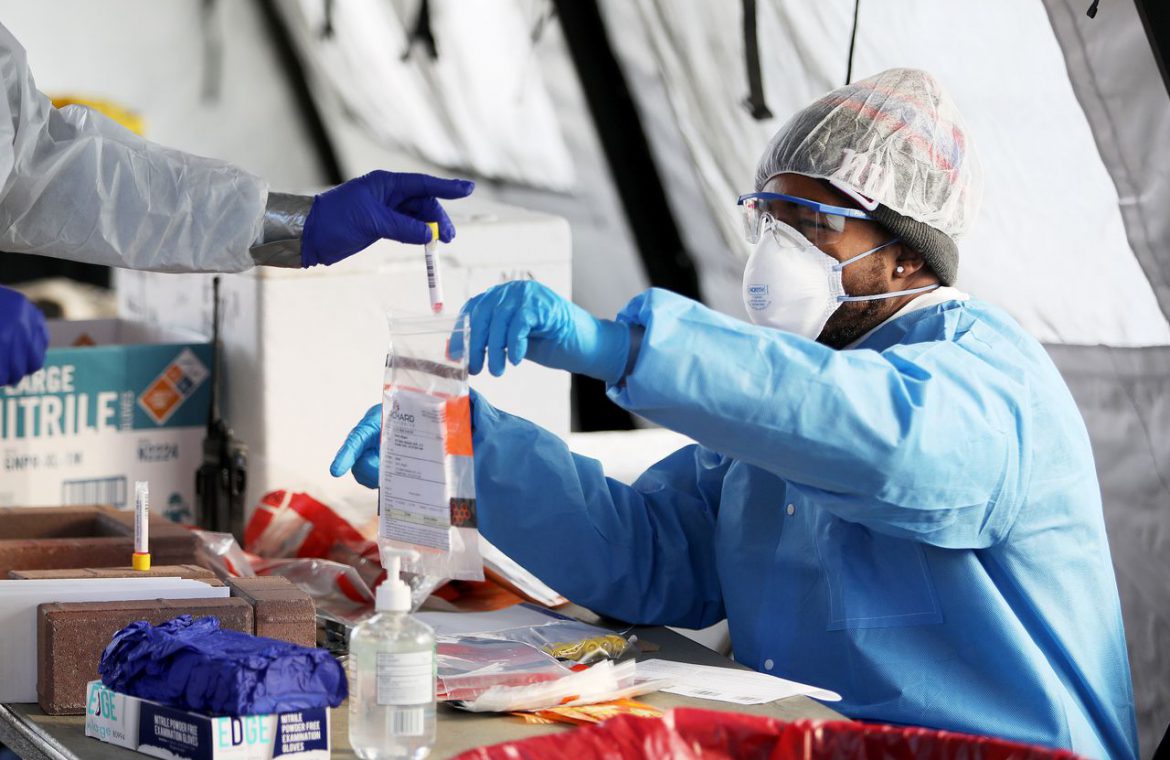 New Jersey on Sunday reported 2,329 new cases of the coronavirus and another 20 deaths as the number of people hospitalized increased slightly after dropping for three consecutive days.

It was the lowest number of new cases reported in more than a month since Nov. 16, when there were 2,232 new COVID-19 positive tests.

There were 3,469 people throughout the state’s 71 hospitals Saturday night compared to 3,464 patients the previous evening. Hospitalizations hit a more than seven-month high on Dec. 22 with 3,873 people seeking treatment.

The statewide rate of transmission of the virus, meanwhile, did not drop, staying at 0.95 for the second consecutive day. Prior to Saturday, the rate dropped for 12 straight days to 0.95, the lowest it’s been since Sept. 2.

Any number over 1 means each person who gets COVID-19 is spreading the disease to more than one person, and getting the rate below 1 is considered key to suppressing the pandemic.

“The numbers speak for themselves. Stay safe. Social distance. Mask up,” Murphy said.

Murphy said during a television interview earlier in the week New Jersey “might be getting close” to the second wave plateauing, but he added the state’s models suggest “we’ve got another several weeks before we peak.”

He also suggested the state will be in a “dramatically different place” in four to six months.

“Without question, we know more,” Murphy said. “We have capacities. And most importantly, the vaccines have begun to hit New Jersey. It’s not gonna be a light switch, but it’s gonna get better. But I fear it gets worse before it gets better.”

Officials say the largest percentage of recent new cases — more than 60% — are a result of transmission in private settings and are coming from all over the state.

Since the outbreak started in March, New Jersey has reported 461,221 cases out of more than 7.46 million tests administered. Those totals do not include rapid tests.

The state of 9 million residents has reported 18,630 deaths — 16,685 confirmed and 1,945 probable fatalities from complications related to the virus.

Vaccinations of residents and staff members at longterm care facilities in New Jersey will begin Monday — a week later than other states because the state missed a federal deadline. There will be vaccinations at about 90 of the state’s nursing homes next week.

At least 7,468 of the state’s COVID-19 deaths have been among residents and staff members at nursing homes and other long-term care facilities. That number has been rising again at a steeper rate in recent weeks. There are currently active outbreaks at 428 facilities, resulting in 5,058 new cases among residents and 5,618 among staffers.

There were 3,469 patients hospitalized in New Jersey with confirmed or suspected COVID-19 cases as of Saturday night. It was five more than the previous night.

That included 686 in critical or intensive care (38 fewer than the previous night), with 487 on ventilators (the same as the previous evening).

There were 237 COVID patients discharged from hospitals Saturday, according to the state’s coronavirus dashboard.

There have now been 105 confirmed in-school outbreaks across the state, resulting in 459 cases among students and staff members across 98 schools.

Those numbers do not include students or staff believed to have been infected outside school, or cases that can’t be confirmed as in-school outbreaks. Though the numbers keep rising every week, Murphy has said the school outbreak statistics remain below what state officials were expecting when schools reopened for in-person classes.

The extensive rules for schools, which include social distancing guidelines for classrooms and strict mask requirements, have made schools among the safest places in the state, he said. The governor said of the 250,563 cases reported overall statewide since the school year began, only 2/10ths of 1% are “traced to activity within our schools.”

As of late Sunday morning, there were more than 80.4 million positive COVID-19 tests across the world, according to a running tally by Johns Hopkins University. More than 1.75 million people have died from coronavirus-related complications.

Our journalism needs your support. Please subscribe today to NJ.com

Matt Arco may be reached at marco@njadvancemedia.com.