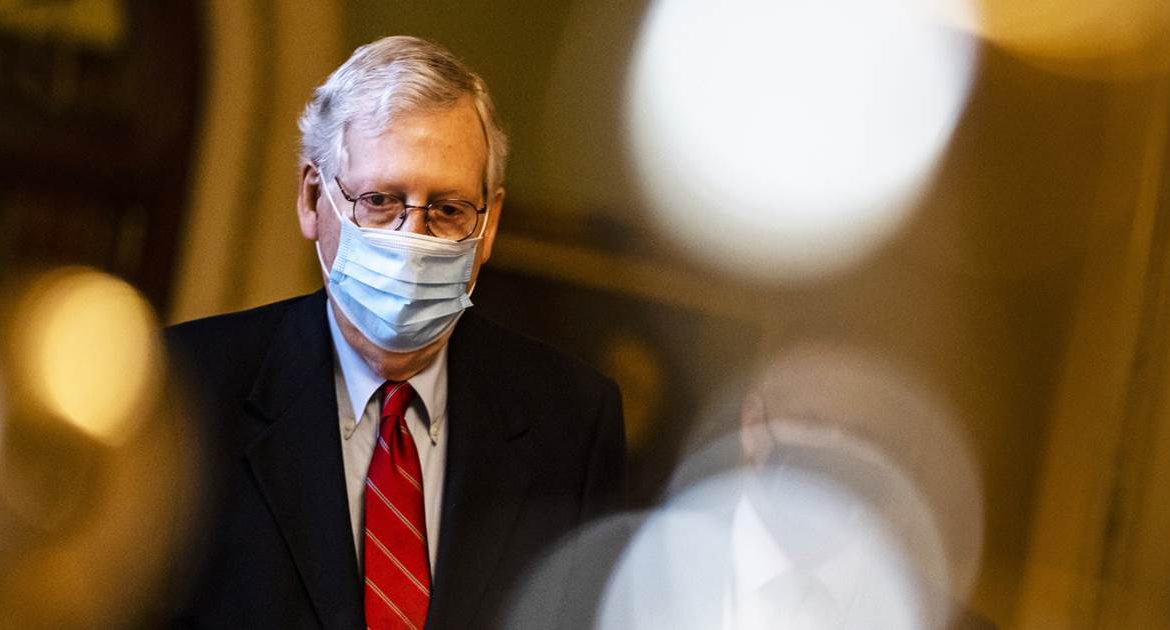 Senate Majority Leader Mitch McConnell on Tuesday shot down a Democratic bid to answer President Donald Trump’s call for increased direct coronavirus payments to Americans, but the measure’s ultimate fate in the GOP-controlled chamber is unclear.

Senate Minority Leader Chuck Schumer, D-N.Y., moved to pass the bill by unanimous consent, which meant it would advance if no other senator objected. But McConnell quickly objected to the measure, which would have increased the size of the checks to $2,000 from $600.

Democrats pushed for McConnell to hold a full vote on the measure as soon as possible, but McConnell was vague about his plans in remarks on the Senate floor. He noted that Trump, who had voiced his displeasure with the size of the direct checks in the Covid-19 relief bill passed last week, has called for more scrutiny of the 2020 election and stripping liability protections from major tech companies in addition to the increased payments for struggling Americans.

McConnell said all three are “important subjects,” and “we will begin a process to bring these three priorities into focus,” but provided no further details. While the form that could take is unclear, combining those priorities into a legislative package could gain some GOP support but also lose Democrats, possibly making the ultimate passage of the increased direct payments more difficult.

Responding to McConnell’s blocking of the payments increase, Trump tweeted, “Unless Republicans have a death wish, and it is also the right thing to do, they must approve the $2000 payments ASAP. $600 IS NOT ENOUGH!”

Unless Republicans have a death wish, and it is also the right thing to do, they must approve the $2000 payments ASAP. $600 IS NOT ENOUGH! Also, get rid of Section 230 – Don’t let Big Tech steal our Country, and don’t let the Democrats steal the Presidential Election. Get tough! https://t.co/GMotstu7OI

Trump’s support for the increased payments — which he pushed aggressively only after Congress passed a relief bill that included the $600 in direct checks that his administration had asked for — had gotten additional Republican senators to come out in favor of it.

GOP Sens. David Perdue and Kelly Loeffler, who are locked in a tight election runoff battle with Democrats Jon Ossoff and Raphael Warnock in Georgia that will determine control of the Senate, voiced support for the bill on Tuesday.

“President @realdonaldtrump is right — I support this push for $2,000 in direct relief for the American people,” Perdue tweeted on Tuesday morning.

A full vote on the measure would force Republican senators to go on record about providing the direct aid to U.S. households just days before the special runoff elections in Georgia on Jan. 5.

After Schumer’s bid failed, Sen. Bernie Sanders, I-Vt., said he will try to force McConnell’s hand by delaying a separate vote this week to override Trump’s veto of the annual defense authorization bill — a move that potentially could keep Perdue and Loeffler in Washington rather than out campaigning. McConnell had said he planned to hold a vote on the veto override on Wednesday.

“Let me be clear: If Senator McConnell doesn’t agree to an up or down vote to provide the working people of our country a $2,000 direct payment, Congress will not be going home for New Year’s Eve,” Sanders said in a statement Monday. “Let’s do our job.”

Sen. Roy Blunt of Missouri, chairman of the Senate Republican Policy Committee, told reporters last week that if the measure came up for a vote, it would not reach the 60-vote threshold needed to pass.

Opponents have cited the cost of the measure as a reason to vote it down. Congress’ Joint Committee on Taxation estimates that increasing the stimulus checks to $2,000 a person would cost another $463.8 billion beyond the estimated $908 billion in the Covid-19 relief bill Trump signed on Sunday.

“Throughout this pandemic, working Americans have been taking it on the chin,” he added. “Right now, they’re facing their hardest and their darkest days. Tens of millions have lost their jobs. Tens of millions are struggling to put food on the table and keep a roof over their heads.”

Some Republicans, including Sen. Josh Hawley of Missouri, have said the need for financial help for struggling Americans outweighs the price tag.

Another Senate Republican, Marco Rubio of Florida, indicated Monday that he would support the additional payments.

“I share many of my colleagues’ concern about the long-term effects of additional spending, but we cannot ignore the fact that millions of working-class families across the nation are still in dire need of relief,” Rubio said in a statement.

Sen. Pat Toomey, R-Pa., told CNN on Tuesday that he was against the increase, calling it a “bad idea” because the bigger payments wouldn’t be going to the people most in need of them.

“We’re talking about sending checks, the vast majority of which will be going to people who have had no loss of income whatsoever. That’s just a fact. How and why does that make any sense at all?” Toomey said.

Dareh Gregorian is a politics reporter for NBC News.