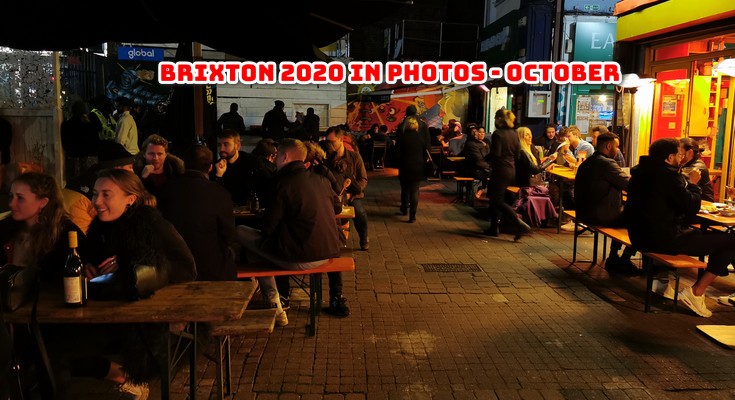 As coronavirus cases rose across the borough, London was moved into the ‘High Tier’ of Covid-19 restrictions, with new rules meaning that people, could only meet friends and family they do not live with outside.

Here’s the month of October 2020 as seen by Brixton Buzz:

Our first post of October reported on a petition demanding that Lambeth Council cancel their plans to demolish the low-rise Truslove House on the  Central Hill Estate.

The postbox opposite Lambeth Town Hall was one of four around the UK that had been painted black to honour black Britons as part of Black History Month 2020.

Seen annoying residents via a backpack-mounted speaker was the the backstreet prowler preacher.

With Lambeth’s planning site showing no less than 848 objections to Hondo’s proposed 20-storey tower in the heart of Brixton – and just 7 people in support – the company started trying to solicit positive comments in the street. They stopped once we posted this article.

We posted up the video highlights of  Dulwich Hamlet Women’s  FA Cup 1st Qualifying Round win at Lancing.

Cineworld confirmed that the Brixton Ritzy will be among the 127 Cineworld and Picturehouse theatres in the UK temporarily closing in October.

We snapped this guitarist on the move in Atlantic Road.

Here’s a blast from Brixton’s radical past: when lesbians were barred from the Brady’s/Railway Hotel pub in the 1970s.

On the 7th, we reported on how Lambeth Council was looking at using money from the private sale of council houses to build new council houses.

After Lambeth decided to postpone the planning decision on Hondo’s unwanted mega-tower in the heart of Brixton, the American-backed developers submitted new mock-ups showing the ugly concrete interior draped in foliage.

In an attempt to make their towering monstrosity more palatable, Brixton developers Hondo shoved a bit of marble effect stone around  a central column and tried to spin it into some sort of community-gathering, architectural masterpiece. We were having none of it.

On a miserable day, we paid tribute to  cyclists who got caught in the torrential rain.

Street Preachers of Brixton: the incomprehensible one.

We took a look at the taped off Orb of Wyck Gardens, Brixton.

Peckham Town smashed Stansfeld 5-0 in front of a record home crowd on Sat 10th Oct. Before the match, the club unveiled their BLM banner.

We were chuffed to announce that the Brixton forum on our sister site urban75 had smashed through the landmark figure of a third of a million posts by its users.

We photographed the wooden planters and seats on Atlantic Road, Brixton.

We posted up the video highlights of 1 Dulwich Hamlet’s 1-1 draw away at Ebbsfleet United.

Somehow, the loss making Pop Brixton once again managed to get to the front of the queue for  tax payer funded hand outs, this time trousering a £220,385 grant from the government’s culture recovery fund, on top of the £24,000 they received in August 2020 from the Emergency Grassroots Music Venues Fund.

On the 14th Oct, Cllr Jack Hopkins, leader of Lambeth council, wrote to residents saying he wants an immediate  ‘circuit breaker’ short term lockdown to “get back control of the virus and to prevent the NHS from being overwhelmed.”

Street Preachers of Brixton: the quiet one mumbling away in a folding chair.

A few days later we witnessed the return of the alternative electronics guy.

We delved into our archives to bring you photos of Brixton Village, Brockwell Park and Brixton street scenes from October 2000.

On the 17th, a battling Chippenham Town arrived at Champion Hill and took all three points from Dulwich Hamlet.

We photographed a Saturday night in Brixton under the new coronavirus restrictions  with live music, table service and socially distanced tables.

Brixton was a very different place in 2005 – Coldharbour Lane art squat, a giant cross and a Prince Albert Halloween, October 2005.

Community resistance grew to Hondo’s unpopular tower, as  over 1,000 planning objections and 5,000 signatures were registered in opposition.

Later in the month, the Brixton Recreation Centre User Group also voiced their opposition to the Hondo Tower,  with St. Matthew’s Estate Tenants and Residents Association also joining the chorus of opposition.

We discovered that Brixton Project ‘community’ group had teamed up with developers to facilitate construction of unpopular 20-storey Hondo tower block.

Lambeth Council had to spend £200,000 on improving the Brixton Customer Services Centre – despite it only being open for two years.

Brixton’s dub reggae history was remembered in Dub London: Bassline of a City at the Museum of London.

Brixton Buzz broke the shocking news that the self styled community group, The Brixton Project, were being paid by developers  Hondo to support their unpopular 20-storey development.

We took a look at a Thursday night in Brixton Hootananny under coronavirus Tier 2 lockdown rules.

Peckham Town cruised past Otford United with a 4-1 home victory in front of a record-breaking crowd.

We took a look around Brixton on a Saturday night after the pubs had shut at 10pm.

Dulwich Hamlet crashed out of the FA Cup after a dismal performance at Eastbourne Borough.

We photographed live bands at the Neutral Zone event at Amp Studios, SE15.

We posted lovely film about Cressingham Gardens Estate – the estate that Lambeth wants to flatten against the wishes of the residents.

Campaigners accused Hondo of ‘using false information’ to get support for their unpopular Enormo-Tower.

It what would turn out to be a very short reopening, Brixton’s Prince Albert welcomed regulars back.

An artist evicted from Brixton Market spoke out against Hondo’s plans to build a huge tower in the centre of Brixton.

We enjoyed this unexpected live jazz jam at The Junction bar, Loughborough Junction.