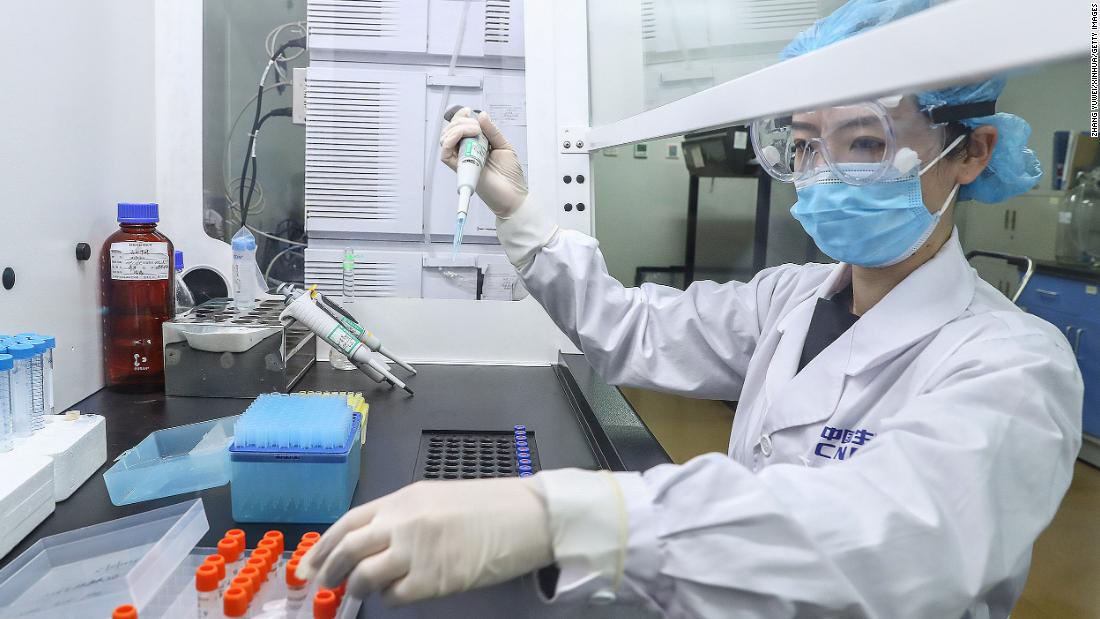 Though no detailed efficacy data for the vaccine has been released, the decision to grant approval underscores claims made by Chinese officials in recent weeks over the safety and effectiveness of the country’s domestically produced vaccine candidates.

China is aiming to inoculate 50 million people with domestic Covid-19 vaccines ahead of February’s Lunar New Year celebrations. It has also drastically scaled up its vaccine emergency use program in recent weeks.

Zeng Yixin, vice-minister of China’s National Health Commission, said at a news conference Thursday that the Sinopharm vaccine will be provided free of charge to Chinese citizens.

“Vaccine is a public good by its nature, and the price may vary based on the scale of use, but an important premise is that it will be provided to the public for free,” Zeng said.

Since December 15, more than 3 million vaccine doses have been administered to “key groups,” Zeng said. That’s on top of the 1.5 million doses administered to “high-risk groups” by the end of November, he added.

Among those inoculated, fewer than 0.1% developed a light fever, and about two people per million developed “relative serious adverse reactions” such as allergies, according to Zeng.

The next step is to inoculate vulnerable groups such as the elderly and people with underlying diseases, before vaccinating the general population, Zeng said, without offering more details on how the vaccines will be provided for free.

A Sinopharm company executive said Thursday the vaccine’s Phase 3 trials covered more than 60,000 people, while detailed data will be released later and published in scientific journals at home and abroad.

An official with China’s drug regulator said the vaccine’s clinical trials are still ongoing, and its manufacturer will be required to submit follow-up data to authorities.

The Sinopharm vaccine is less effective than those developed by Pfizer-BioNTech and Moderna, which have an efficacy rate of about 95%. Russia says its Sputnik V vaccine is 91% effective. And the vaccine’s efficacy rate of 79% is lower than the 86% announced by the United Arab Emirates for the same vaccine on December 9. The UAE based its results on an interim analysis of late-stage clinical trials conducted there from July. It has since approved the vaccine for public use.The Sinopharm vaccine has a higher efficacy rate than the one developed by the UK’s Oxford University and AstraZeneca, which averaged 70%. On Wednesday, the UK became the first country to approve that vaccine for public distribution.

A step closer to massive rollout

Sinopharm’s results were announced weeks after its global competitors. And with a lack of details, it remains unclear whether the information provided will be enough to dispel skepticism over the quality of Chinese vaccines.

Nevertheless, the announcement could still pave the way for the vaccine’s large-scale rollout both within China and globally.

China is ready to send hundreds of millions of doses to countries that have conducted last-stage trials for its leading vaccine candidates. Chinese leaders have also promised a growing list of developing countries priority access.

Beijing is using the global campaign as a soft power tool, analysts say, to try to repair any damage to its image from its early mishandling of the coronavirus pandemic.

Aside from the approved Sinopharm vaccine, China has four coronavirus candidates which have reached Phase 3 clinical trials — the last and most important step of testing before regulatory approval is sought. Having largely eliminated the spread of coronavirus inside its borders, Chinese drugmakers had to look abroad for places to test the efficacy of their vaccines. Together, they have rolled out Phase 3 trials in at least 16 countries.

Sinopharm’s two vaccine candidates, including the one approved in China, have rolled out Phase 3 trials in 10 countries, mostly in the Middle East and South America.

Sinopharm chairman Liu Jingzhen said last month that dozens of countries have requested to buy the company’s vaccines. He did not name the countries or elaborate on the amount of doses they proposed, but he said CNBG was capable of producing more than a billion doses in 2021.

Compared with Pfizer and Moderna, Sinopharm’s vaccines do not require freezing temperatures for storage, making transport and distribution much easier — especially in developing countries that lack cold storage capacities.

Correction: An earlier version of this story misstated the number of “relative serious adverse reactions” to Chinese vaccine candidates. It is about two people per million among those inoculated.