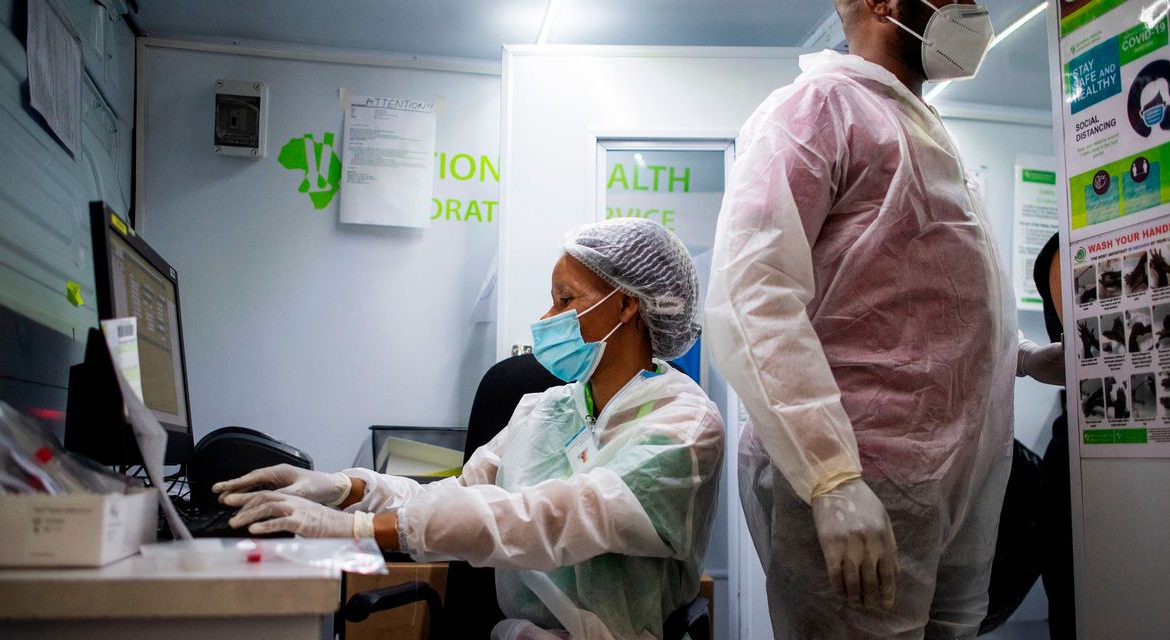 Scientists around the world are scrambling to learn more about previously unknown variants of the coronavirus that seem to spread from person to person more readily than other versions of the Covid-19-causing pathogen.

In South Africa, meanwhile, doctors and researchers battling a second surge of Covid-19 cases are studying another new variant and what role it plays in the rising tide of cases there. The variant, known as B.1.351, has been identified in samples dating back to October. It hasn’t been detected in the U.S.

The Pfizer vaccine administered Dec. 8 in the U.K., where a coronavirus variant led to a lockdown.

Here is what we know so far about the new variants and the genetic mutations that characterize them, as well as their potential impact on public health.

What is a viral variant?

Viral variants are new versions of a virus that arise as a result of small changes in its genetic code. Over the course of the pandemic, there have been several variants. Those that proved able to spread more efficiently have become more prevalent, while others fizzle out. “It’s just like natural selection, like evolution,” said Bettie Steinberg, a virologist and provost at Northwell Health’s Feinstein Institutes for Medical Research.

Why the concern about these particular variants?

Some doctors worry that the new variants of the coronavirus could supercharge the spread of Covid-19, putting additional stress on hospitals and nursing homes when cases are near their historic highs.

Preliminary data suggest that the new variants are no more likely to cause severe illness than the more familiar forms of the coronavirus. But even if their virulence isn’t greater, the variants’ apparently increased transmissibility could spell more misery and death by increasing the number of cases of Covid-19.

Researchers from the London School of Hygiene and Tropical Medicine combined behavioral and epidemiological data on patterns of disease transmission with mathematical models to determine whether the U.K. variant is more transmissible than previously identified variants.

They found the new variant to be more transmissible than previous variants.

Understanding how the body clears the new coronavirus is becoming more important as the U.S. begins to reopen. WSJ’s Daniela Hernandez explains how the body fights infection and why feeling better doesn’t equal being virus-free. Photo illustration: Laura Kammermann

Is it possible that the rapid spread of the new variants isn’t a result of increased infectiousness but instead of poor adherence to social distancing and other measures aimed at curbing contagion?

Scientists don’t think so, at least in the U.K. As evidence,

an epidemiologist at Imperial College London and a member of a scientific panel that advises the British government on respiratory-virus threats, pointed to epidemiological data from November showing that cases of the new U.K. variant were exploding in the area southeast of London as coronavirus cases were falling in other parts of the country. The entire country was in lockdown during this period.

The situation may be different in South Africa, where researchers said human behavior might be playing a key role in the surge of cases. Millions of South Africans traveled widely in recent weeks, and tens of thousands had gathered in restaurants and bars and on beaches during the holiday season.

What gave rise to the new variants?

Like other viral pathogens, the coronavirus spreads by infecting cells and then reproducing within them, creating copies of itself that spread throughout the body and then are shed, potentially infecting other people.

The reproduction process involves copying the virus’s genetic code, which holds the instructions for building successive generations of virus particles, or virions. But the code isn’t always reproduced faithfully; sometimes the copying process yields mistakes that researchers have likened to typographical errors. This is what gives rise to new viral variants such as the ones that have emerged recently.

Some viruses have genetic codes of DNA, the same molecule that carries the genetic information in human cells. Other viruses, including the coronavirus, are based on a related molecule known as RNA. RNA viruses lack a molecular proofreader, a protein that checks for mistakes and corrects them, so they “accumulate more typos more quickly,” Dr. Steinberg said.

What about the mutations seen in the new variants?

The new variant that cropped up in the U.K. has about two dozen separate mutations, including some related to the prominent outcroppings that stud the coronavirus’s outer surface. It is this so-called spike protein that helps the virus infiltrate cells by binding to and then breaching their outer membranes.

In theory, a mutated form of the spike protein could boost the ability of a virus to attach to cells and thus enable it to infect with increased efficiency. Previous research has shown one mutation of note in the U.K. variant can make the virus more infectious, said Dr. Ravindra Gupta, a University of Cambridge virologist who ran the studies.

The South African variant has more than 20 mutations, including several affecting the spike protein. Some are in key spots where antibodies that prevent the virus from entering cells bind, scientists said, meaning they could potentially help the virus evade a person’s natural immune response.

The U.K. and South Africa variants share a spike-protein mutation that enables the spike to bind more tightly to the cell membranes, research suggests.

SE and the one from

confer immunity to the new variants, scientists have expressed confidence that they do.

The mutations “raise some questions about vaccine efficacy, but it’s important to note that the vaccines elicit a broad immune response…that targets several areas of the spike protein,” said Dr. Richard Lessells, an infectious-disease specialist at the University of KwaZulu-Natal in Durban, South Africa, and a member of the team that discovered the South African variant.

Get an early-morning briefing about the coronavirus each weekday and a weekly Health newsletter when the crisis abates.

Pfizer and Moderna have conducted lab tests of their vaccines against several versions of the coronavirus and found that the vaccines were effective against all, according to the drugmakers. The companies said they were conducting experiments to determine whether antibodies generated by people vaccinated were effective against the U.K. and South Africa variants.

The Centers for Disease Control and Prevention continues to urge people who are eligible for vaccination to get the shots. “Based on studies with other viruses containing similar mutations, CDC believes there will be little or no impact on immunity from natural infection or vaccination,” the agency said in a statement Tuesday.

How will scientists know for sure if these new variants spread more easily?

Scientists said that they had studied some of the new variants’ individual mutations but that it would be important to look at what happens when they appear together—as they do in the new variants. That research involves experiments in cells and in animals to test whether the new variants attach to and enter cells more efficiently; whether they replicate more readily; and, most important, whether they spread more easily.

Animal studies involving an earlier coronavirus variant convinced some scientists that its particular mutations made it more infectious, said Dr. William Hanage, a Harvard T.H. Chan School of Public Health biologist who specializes in infectious disease. That version of the virus also had a mutated spike protein.

As the weather gets colder and people head indoors, the risk of catching Covid-19 is rising. WSJ explains why air ventilation and filtration are one of our biggest defenses against the coronavirus this winter. Illustration: Nick Collingwood/WSJ

What can be done to stay safe from the new variants?

Infectious-disease experts and public-health officials say it is important to continue to adhere to the familiar strategies for avoiding contagion, including social distancing, masking and hand-washing, as well as avoiding exposure to other people in indoor settings, especially where ventilation is poor. Extra care might be required in indoor gatherings if experiments confirm that the new variants are more infectious.

—Joanna Sugden contributed to this article.

Write to Daniela Hernandez at daniela.hernandez@wsj.com and Sarah Toy at sarah.toy@wsj.com

Don't Miss it Which countries have reported new variants of COVID-19? | Coronavirus pandemic News
Up Next Oxford COVID-19 Vaccine Cleared By Expert Panel For India: Sources