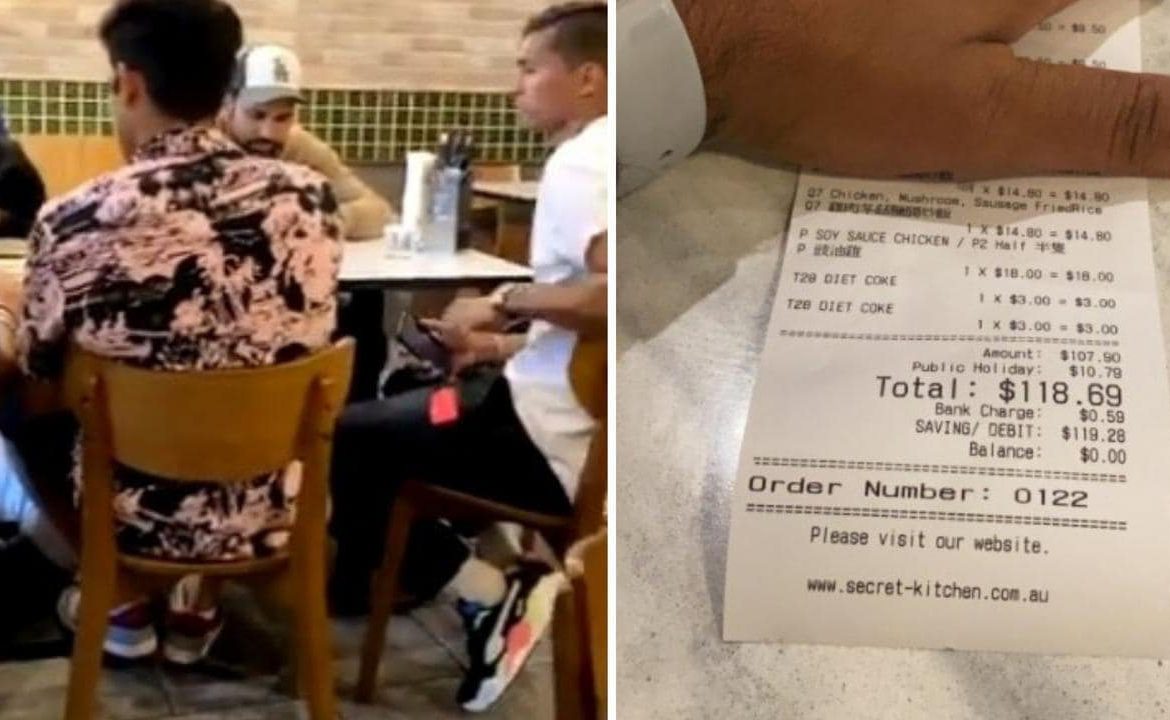 The Board of Cricket Control in India have denied the members of the Indian cricket team seen dining out in Melbourne have breached COVID-19 biosecurity protocols but Cricket Australia released a statement saying it was still being investigated.

While boasting about the encounter on social media, Singh claimed Pant “hugged” him after he generously paid their $118.69 restaurant bill.

As of Saturday afternoon, Singh’s video has registered more than 250,000 views on Twitter.

As reported by The Daily Telegraph’s Ben Horne, Cricket Australia’s strict biosecurity guidelines dictate players should only dine in public outdoors, but the Indian quintet is seemingly indoors without masks.

According to the report, the incident would be examined by CA, but ultimately it was a matter for the The Board of Control for Cricket in India.

Late on Saturday night, Cricket Australia released a statement saying “The BCCI and CA are investigating the matter and seeking to determine whether the outing constitutes a breach of biosecurity protocols”.

“In the interim, on the advice of the Australian and Indian medical teams, the aforementioned players have been placed in isolation as a precaution,” the statement read. “This will include separating the group of players from the broader Indian and Australian squads when traveling and at the training venue.

“Players will be permitted to train in accordance with the strict protocols that have been put in place to ensure the ongoing safety of all members of the Indian and Australian squads.

“Similar measures were taken during the BBL this season after it was determined two Brisbane Heat players failed to comply with tournament biosecurity protocols.”

He added that the BCCI had launched an investigation into the New Year’s Day meal after being alerted by the publication and that it would review the video but had declined to comment further.

But a senior member of the BCCI has reportedly rubbished the reports while Indian journalist Boria Majumdar said “there is no investigation for a breach confirms @BCCI and never was such a thing even under consideration”.

“No, there has been no breach in bio-security protocols. Everyone associated with the Indian team is well aware of the protocols,’ the official told the Press Trust of India on conditions of anonymity.

“We can only term it as a malicious spin by a section of Australian media and this has started after their humiliating defeat.

“The Australian media at times acts as an extension of their cricket team.”

Earlier in the afternoon, the fan went back to Twitter as his video went viral to try to shut down the investigation.

“Clarification — Pant never hugged me it was all said in excitement we maintained social distance all thru:) Apologies for miscommunication,” Singh wrote on Twitter.

As the number of COVID-19 cases rises and state borders shut, CA is desperately working to ensure the remainder of the Border-Gavaskar Trophy and Big Bash League can proceed without a hitch.

Last month, Brisbane Heat captain Chris Lynn and Dan Lawrence were investigated by CA after coming in close contact with members of the public.

The third Test between Australian and India is scheduled to commence at the SCG on Thursday, January 7.

Both squads are expected to fly up to Sydney from Melbourne on Monday.

Don't Miss it COVID-19: Batches of Oxford/AstraZeneca coronavirus vaccine arrive at UK hospitals ahead of roll-out | UK News
Up Next Christmas coronavirus surge appears to begin in L.A. County