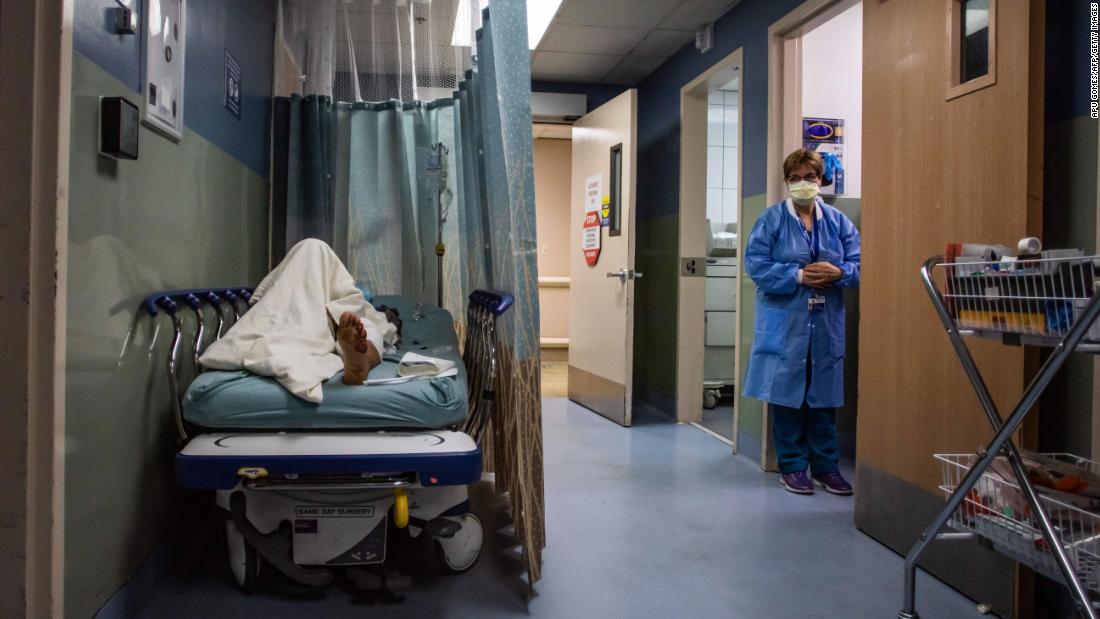 That’s as the number of Covid-19 patients in hospitals on a given day hit another US record Monday, at more than 128,200, according to the COVID Tracking Project. And some states are warning the worst may be yet ahead.

Mississippi Gov. Tate Reeves said the state had “more patients with Covid in ICU beds at the end of last week than we have had at any other period throughout this pandemic.”

And he expects “some very large numbers with the spread from the holiday gatherings combined with the backlog and testing and reporting that may have occurred during the last 10 days.”

After marking a particularly deadly day in New York, Gov. Andrew Cuomo said Monday there has been a spike following the recent social gatherings that took place.

“It is clear that the increase through the holidays, increased the infection rate and increased the number of people who are now walking into hospitals,” the governor said.

In California, where state officials say ICU units in at least two regions are filled to practical capacity, infections are continuing to soar.

“We are heading into what we anticipate as a surge on top of a surge,” Gov. Gavin Newsom said in a Monday news conference. “It’s going to put a lot of pressure on hospitals, and I see it coming out of the holidays.”

It’s what happened after Thanksgiving as well. Weeks ago, Los Angeles officials said part of the brutal surge in infections and hospitalized patients they were seeing was due to Thanksgiving gatherings. Now, they asked residents to do their part to avoid even higher numbers. “If we fail to use the tools currently available, our frontline health care workers, now caring for distressingly large numbers of Covid-19 patients, will face many more weeks of increasing numbers of patients and the heartbreaking loss of many lives,” Los Angeles County Public Health Director Barbara Ferrer said in a statement Monday.

Vaccinations, meanwhile, are ongoing — but experts have said it likely won’t be for a couple months before they are widespread enough to make any meaningful impact in the course of the pandemic.

About 15.4 million doses had been distributed and about 4.5 million had been administered as of Monday morning, according to the US Centers for Disease Control and Prevention.

When asked about the discrepancy between the vaccine doses distributed and those administered, Operation Warp Speed chief scientific adviser Moncef Slaoui said “nothing has gone wrong,” adding it’s the responsibility of the states to actually administer vaccines.

“We agree that there is a lag,” Slaoui told CNN. “We are available and ready to help the states as they ask specifically for help.”

While some states have acknowledged on-the-ground issues that have contributed to delayed vaccinations, many have for months said they needed significantly more federal funding to be able to execute vaccine-rollout plans.

In Kentucky, Gov. Andy Beshear said Monday he was “not OK” with the pace that vaccines were being administered in the state.

“But it is underway,” he said. “It is ramping up. And we just need to step on the gas.”

According to one study, administering first doses of Covid-19 vaccines to more individuals instead of withholding available supply for the second doses may reduce the number of new cases. The US government currently withholds about half of the available vaccine supply, distributing it to states and other jurisdictions weeks later to be administered as a second in a two-dose series.

But by reducing the amount withheld to 10% for the first three weeks and supplying a steady dose of six million doses each week, the US could avoid up to 29% more cases over eight weeks, the study found.

To help expedite vaccinations, Slaoui said the US might start giving half-doses of Moderna’s vaccine to people aged 18 to 55 — which could make the vaccine available to twice as many people in this age group.

The decision, Slaoui said, ultimately rests in the hands of the Food and Drug Administration.

But anyone who received the Moderna or Pfizer vaccine must get both doses, two top FDA officials said Monday. People who are speculating about the possibility of making do with just one dose are misinterpreting the data, they said.

“We have been following the discussions and news reports about reducing the number of doses, extending the length of time between doses, changing the dose (half-dose), or mixing and matching vaccines in order to immunize more people against COVID-19,” FDA Commissioner Dr. Stephen Hahn and Dr. Peter Marks, director of the FDA’s Center for Biologics Evaluation and Research, said in a statement.

“At this time, suggesting changes to the FDA-authorized dosing or schedules of these vaccines is premature and not rooted solidly in the available evidence. Without appropriate data supporting such changes in vaccine administration, we run a significant risk of placing public health at risk, undermining the historic vaccination efforts to protect the population from COVID-19,” they added.

One member of the FDA’s vaccine advisory committee called half-doses a “terrible idea.”

“There’s no data on efficacy of a half dose. If you use a half dose, you’re just making it up. You’re just hoping that you’re right,” Dr. Paul Offit said. “Why would you dare to make up something when you don’t know whether or not it works?”

Don't Miss it Toronto Public Health will publicly announce businesses that have had a COVID-19 outbreak – Video
Up Next Coronavirus News Updates: Centre should bear cost of COVID-19 vaccine for the poor, says Rajesh Tope