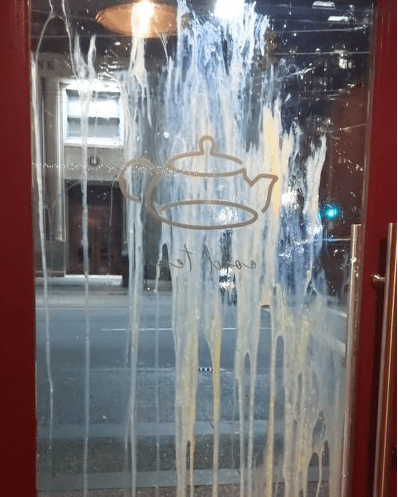 VANCOUVER (NEWS 1130) — A downtown restaurant that was fined for violating public health orders on New Year’s Eve has been inundated with “countless hateful comments” and “physically vandalized,” according to a spokesperson.

The Vancouver Police Department issued a statement Jan. 1 saying a restaurant was fined $2,300 for hosting a large, private party at 11 p.m.

“Officers estimated there were around 100 people in attendance. Food and alcohol were being served,” according to police. The cutoff for serving alcohol that night was 8 p.m., and all restaurants had been ordered to close by 10 p.m.

Maddelen Pasini, who speaks for Cold Tea Restaurant, says the police “grossly exaggerated” the extent to which orders were violated.

“It was 38 people, they were sitting at socially distanced tables,” she writes in an email.

“Unfortunately when the police stormed the restaurant through the back door, the optics weren’t good, as the group was in the process of taking pictures together, maskless.”

She also says the guests were in the process of leaving, although she notes it was past 10 p.m.

“At the end of the day Cold Tea was simply trying to survive and make rent for this month, they had no intention of breaking the regulations,” she writes.

“At this point, it comes down to their livelihood.”

The business, according to Pasini, did not qualify for government assistance such as wage or rental subsidies because it is a start up.

“I think restaurants are struggling enough as is and it’s unfortunate that things got exaggerated. They understand the mistakes that were made, but are paying for far worse,” she says.

“Since the initial (exaggerated) news broke there have been countless hateful comments with racist undertones directed to them on social media and their restaurant has been physically vandalized because of this situation.”

The Vancouver Police Department stands by their initial statement.

“VPD officers did go there in response to a complaint about an unlawful gathering, and based on their investigation a $2,300 ticket was issued under the Public Health Order. There appeared to be a private party taking place. There was music, people moving around without social distancing, and liquor and food being served,” writes Cst. Tania Visintin in an email.