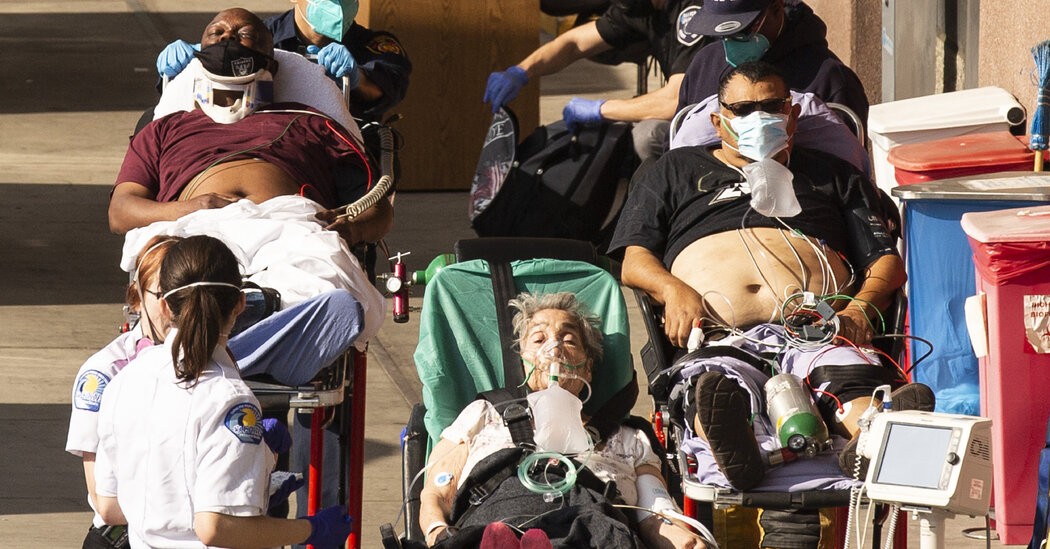 Officials in California have painted an increasingly catastrophic picture of the state’s Covid-19 crisis over the past several days, precisely what they had warned was coming, as the state faces an oxygen shortage.

California has deployed the U.S. Army Corps of Engineers and the California Emergency Medical Services Authority to deliver and refill oxygen tanks.

In Los Angeles County, emergency workers have been told to conserve oxygen and administer the minimum amount of oxygen to keep patients’ oxygen saturation level at or just above 90 percent. (A level in the low 90s or below is a concern for people with Covid-19.)

Officials in the most populous U.S. county have said a person is being infected every six seconds in the county and one in five residents currently tested was infected with Covid-19. “Your bubble is not as safe as you think it is,” the department tweeted.

Gov. Gavin Newsom has warned that the worst was somehow yet to come: a “surge on top of a surge” driven by post-holiday infections.

In some cases, there will be nowhere for the victims of that surge to go.

Health authorities in Los Angeles County have directed ambulance crews not to transport some cardiac arrest patients whose survival is unlikely. At some hospitals, patients are being lined up outside while workers try to find bed space.

California was already short on hospital beds before the pandemic, and I.C.U. capacity in a large swath of the state has been nonexistent for weeks.

The surge in Southern California has been so severe that industry groups themselves have called for film and television production, which had been allowed to continue even after outdoor dining was banned, to pause. SAG-AFTRA, the union representing 160,000 industry workers, was joined by groups representing producers and advertisers in calling for an in-person production halt on Sunday.

Their statement noted that even if workers do not contract the virus, they are still at risk of injury from stunts, equipment failures, or falls.

“With few if any hospital beds available, it is hard to understand how a worker injured on set is supposed to seek treatment,” said David White, SAG-AFTRA’s national executive director.

The Grammy Awards, one of the entertainment industry’s biggest nights, were postponed on Tuesday from Jan. 31 to March 14. A statement from the Recording Academy, which presents the awards, and CBS, its longtime broadcast partner, cited the “deteriorating” situation in Los Angeles.