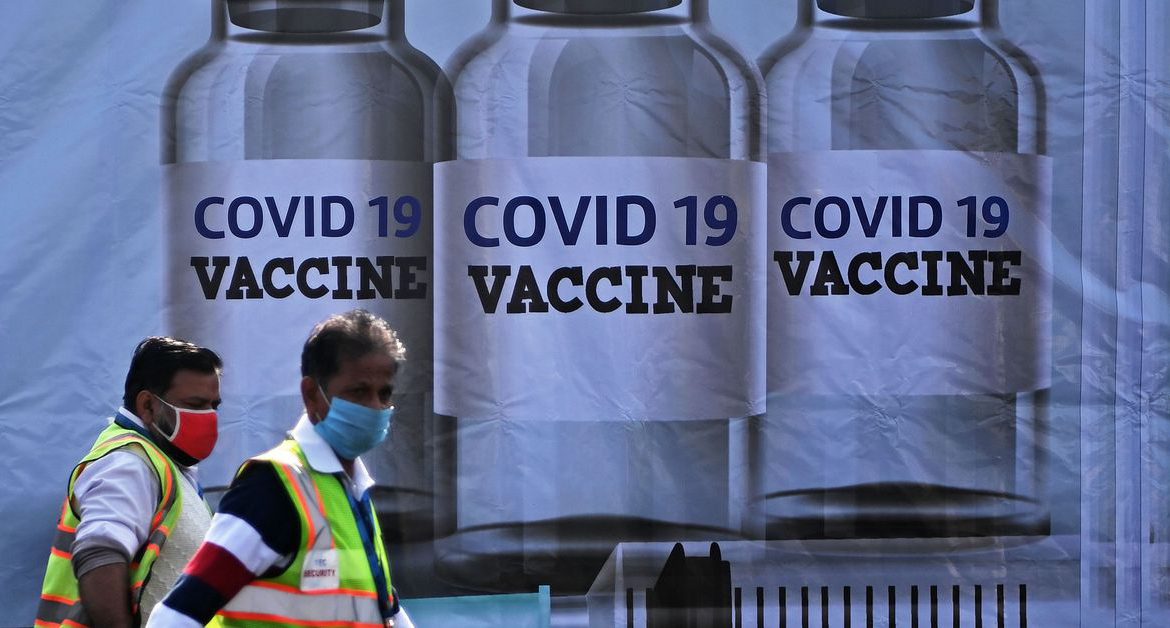 The country was the second (after the United Kingdom) to rubber-stamp the inexpensive and easy-to-store AstraZeneca/Oxford vaccine. But the approval of a second vaccine, the domestically developed Covaxin, is raising concerns because it was given while phase 3 trials of the drug are still underway and before its efficacy data has been made public.

Indian Prime Minister Narendra Modi cheered the approval of both vaccines on Twitter, calling it “a decisive turning point to strengthen a spirited fight” against the pandemic. Modi also congratulated the country’s “hardworking scientists and innovators” for their efforts, which he said would make India healthier and Covid-19-free.

But many health experts and activists are demanding more transparency and the release of data on the drugs’ efficacy.

In the coming weeks, all eyes will be on India, the world’s second-most-populous country — with the second-highest number of coronavirus infections, after the United States — as it begins its vaccine rollout.

According to data from Johns Hopkins, the country of 1.4 billion has reported more than 10 million cases and 150,000 deaths as of January 5. Lockdowns aimed at curbing the spread of Covid-19 have had a deleterious impact on India’s economy, which was already hurting before the pandemic began. About 24 percent of India’s GDP was erased from April to June 2020, so getting the virus under control is critical for improving the country’s economic outlook.

The Indian government and the pharmaceutical companies say both vaccines are safe to use and will prove invaluable to India’s fight against Covid-19, especially after some experts suggested the potentially more infectious strain of the coronavirus might already be in the country.

To meet the challenge of one of the biggest vaccination efforts in history, experts say the Indian government needs a credible scientific voice — a Dr. Anthony Fauci for India, if you will — to help with transparency, as well as to ensure best standards are met and that vaccines get to those in need.

Although India has granted emergency authorization to two vaccines, Covaxin, developed by the Indian company Bharat Biotech in partnership with the Indian Council of Medical Research and the country’s National Institute of Virology, is the one causing some controversy.

In a January 3 press statement, the Drug Controller General of India (DCGI), the government body responsible for implementing new drugs and overseeing clinical trials in the country, said the results from phase 1 and 2 clinical trials of the drug show it is safe and provides immune defense from Covid-19.

Per the World Health Organization’s guidelines, phase 1 of an experimental vaccine trial includes giving the vaccine to a “small number of volunteers to assess its safety, confirm it generates an immune response, and determine the right dosage.”

In phase 2, “The vaccine is usually given to hundreds of volunteers, who are closely monitored for any side effects, to further assess its ability to generate an immune response.” Phase 3 is when researchers get a look at how the vaccine behaves in the real world.

Covaxin’s phase 1 and 2 trials involved far fewer participants — approximately 800 individuals, according to the DCGI press statement — than the bigger phase 3 trial, which is still underway. About 22,500 people have received the vaccine as part of the phase 3 trial, which began in mid-November 2020.

But that trial is still ongoing and the data from it has not been publicly released — and though Covaxin is built on an inactivated virus platform, which has been used to develop well-known vaccines for diseases like polio and hepatitis A, experts and activists are still concerned.

That’s because, as Ramanan Laxminarayan, director of the Center for Disease Dynamics, Economics & Policy in Washington, DC, told me, “It is difficult to reach any definitive conclusion without safety and efficacy data.”

“Phase 3 data are not yet in the public domain, and until then it would not be advisable to use this vaccine outside of clinical trial settings,” he added.

In a January 5 interview with the Indian news outlet the Wire, Dr. Gagandeep Kang, one of India’s foremost vaccine experts, said she wouldn’t take the Covaxin vaccine until data on its efficacy is made public.

All India Drug Action Network (AIDAN), a health watchdog group, also expressed shock at Covaxin’s impending emergency authorization in a letter posted to Twitter the day before approval was officially given. The group has asked the DCGI to reconsider its decision, arguing there hasn’t been enough data presented on the drug’s efficacy.

Despite the objections, India’s Drugs Controller General VG Somani told reporters January 4 that he would “never approve any vaccine if there are any safety concerns. Covid-19 vaccines are 110% safe,” according to the Hindustan Times.

Bharat Biotech CEO Dr. Krishna Ella responded to criticism of his company’s vaccine in a January 4 press conference, during which he blamed much of the negative response to the vaccine on what he called “a backlash against Indian companies.”

“That is not right for us. We don’t deserve that,” he said.

Ella also said his company was being transparent with data and had produced more than 70 articles, if people could be patient enough to read them.

But AIDAN, the watchdog group, took issue with the AstraZeneca/Oxford vaccine as well, requesting more specific data from trials both abroad and within India. AIDAN also asked for estimates of how effective the “dosing regimen and dosing schedule” would be in India.

The AstraZeneca/Oxford vaccine, called Covishield in India, will be produced by the Serum Institute of India, the world’s largest vaccine producer. Also known as AZD1222, that vaccine might be a particularly strong option to help less-wealthy countries curb the coronavirus pandemic because it is cheaper and easier to store.

As Vox’s Julia Belluz and Umair Irfan explained, the AstraZeneca vaccine is “among the most likely to be affordable to low- and middle-income countries. And considering much of the world’s population currently lives in low- and middle-income settings, it’s the jab that — with a 90 percent efficacy result — could make a big dent in the pandemic worldwide.” (There are continued questions, however, around just how effective the vaccine is, given dosage problems that arose in the vaccine’s phase 3 trial.)

Unlike the two leading vaccines by Moderna and Pfizer/BioNTech, which must be stored at really cold temperatures, the Covishield vaccine can be kept in a standard refrigerator for up to six months, making large-scale distribution easier. Both Covishield and India’s homegrown Covaxin can be kept at a temperature between 2 and 8 degrees Celsius (35.6 to 46.4 Fahrenheit) and require two doses.

Still, distributing vaccines to all of India’s population is going to be a gargantuan challenge.

The vaccine distribution numbers in India are challenging

India plans to provide voluntary inoculations to 300 million people this year, using many of the same tools and practices it uses to conduct elections, which are the world’s biggest.

As in the US, workers on the front lines of the pandemic in India will be the first to receive the shots. But India will also include people over the age of 50 alongside health care workers in the first batch. After that initial phase, people under 50 with underlying conditions like heart disease, which increase the risk of death from Covid-19, will be vaccinated. Everyone else will get the vaccine based on available supply and how the pandemic develops.

Officials will use electoral rolls to identify people over 50. People who are eligible for the vaccine must preregister to receive their shots at one of thousands of local centers, which are run like polling places. Mobile teams will be deployed to help administer the vaccine in more remote and tough-to-reach locations.

According to the government’s plans, successful implementation requires effective training and organization of all workers involved in the vaccination process. Because the scale of the plan is so massive, all steps in the vaccine introduction will be supervised and monitored.

The Indian government will digitally track who has received the vaccine using the COVID-19 Vaccine Intelligence Network (Co-WIN) system, a platform that can trace vaccination “on a real-time basis.”

Although such a big effort will have considerable challenges in procurement, delivery, and vaccine demand, Laxminarayan says India’s success with the eradication of polio and the country’s “steady strengthening of its immunization program over the years” will be apparent during the Covid-19 vaccination campaign.

“I have little doubt that India will capably manage the procurement and delivery of vaccines, including of getting a cold chain system in place, but the public communication aspect is still lacking,” he said.

On January 3, mock vaccinations were held across India to iron out any bumps in the process before hundreds of millions get real shots.

Volunteers and health officials are seen during a dry run for the Covid-19 coronavirus vaccine, at a private hospital in Allahabad on January 5, 2021.

For now, as the controversy over the emergency approval of Covaxin suggests, the most immediate challenge is one of public communication.

As Laxminarayan said, “There needs to be a credible scientific voice at the very top that is clear, transparent, and reassuring that the best standards are being met to make sure that vaccines reach everyone.”

Every day at Vox, we aim to answer your most important questions and provide you, and our audience around the world, with information that empowers you through understanding. Vox’s work is reaching more people than ever, but our distinctive brand of explanatory journalism takes resources. Your financial contribution will not constitute a donation, but it will enable our staff to continue to offer free articles, videos, and podcasts to all who need them. Please consider making a contribution to Vox today, from as little as $3.