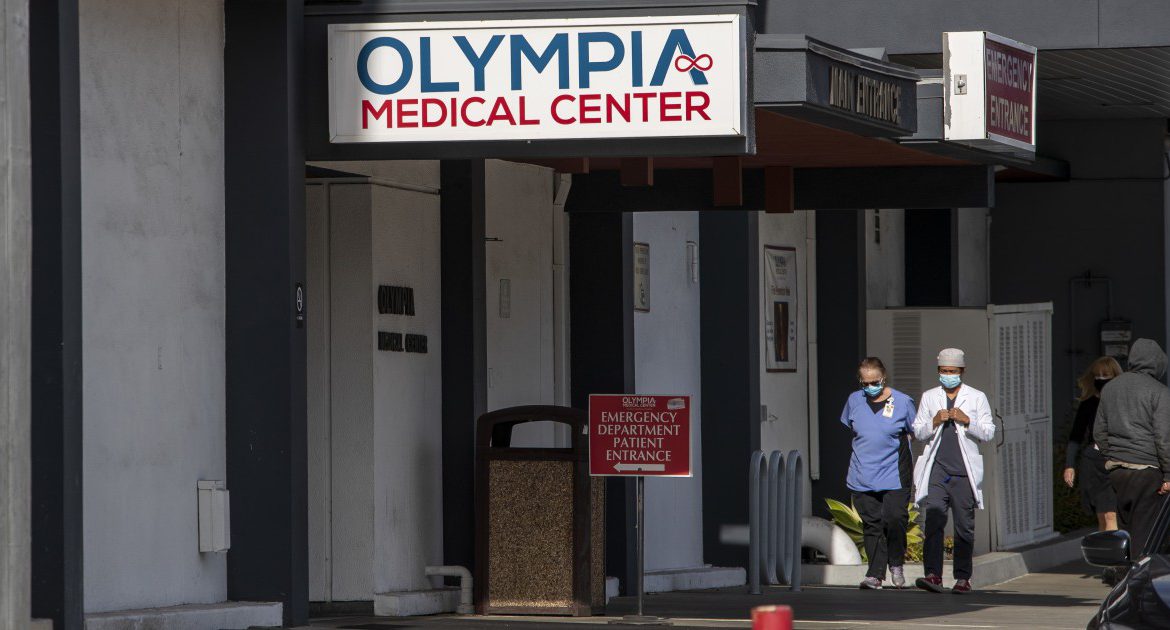 When healthcare workers at Olympia Medical Center reported for work on New Year’s Eve, they were prepared for another grueling day of patient care amid L.A.’s worsening COVID-19 surge. What they weren’t prepared for was the laminated paper taped to the front door.

“Olympia Medical Center has elected to voluntarily suspend all patient care services, including the emergency department and all emergency medical services, as of 11:59 p.m. on March 31, 2021,” the notice said.

Employees were outraged, blindsided and concerned, with one medical staff officer calling it a “terrible public health mistake” to close an L.A. hospital in the midst of the pandemic.

“How can we be having an acute-care hospital shut down by March 31 when we need hospital beds, when they’re putting up field hospitals and asking Navy ships to come back?” said the officer, Dr. Don Schiller. Any patients who remain at Olympia on April 1, he noted, will have to be transferred to another hospital because all clinical activity will stop.

Yet few answers were immediately available, either for the 450 healthcare workers who will lose their jobs at the 204-bed hospital in Mid-Wilshire, or for the community that relies on it.

The owner of Olympia Medical Center, Alecto Healthcare, sold the facility to UCLA Health in recent weeks. UCLA Health spokesman David Sampson confirmed the purchase in a statement to The Times, which said it was Alecto’s decision to close the hospital and that UCLA planned a “major facility renovation” starting this year.

“The operators decided to sell the property,” the statement said, “and will be winding down their services over the next few months before closing the hospital.”

He could not say what UCLA Health plans to do with the facility after the renovation, nor for how long the hospital will be out of commission. He declined to say whether the facility would even remain a hospital. The Los Angeles Department of Building and Safety said no permit applications have yet been filed at the address.

The notice on the hospital’s door, which has also been posted on its website, advises patients of three nearby hospitals that provide acute care, including Southern California Hospital at Culver City and Ronald Reagan UCLA Medical Center in Westwood. The closest hospital on the list, Cedars-Sinai, is already struggling with intensive care unit capacity under the surge of COVID-19.

The lack of clarity has left the community in the lurch. The impending suspension of services, some beginning as soon as Jan. 31, will likely coincide with a jump in COVID-19 cases tied to the holidays.

On Monday, healthcare workers at Olympia said the facility was well over capacity with few doctors and nurses left to help. After the announcement, they were all advised to start seeking credentialing elsewhere, and many have already jumped ship.

“People are looking for jobs already because they know this place is going to be shutting down,” said one Olympia worker who asked to remain anonymous, “so now the place will die a slow death.”

For the remaining uncertain weeks of the facility’s operation, patients who come to Olympia could experience shortfalls in care. Over the weekend, there were only two nurses in the 30-bed emergency room, and two patients had to wait 28 hours for an ICU bed.

The healthcare workers who still remain, most of whom were already struggling under the weight of countywide staffing shortages, are now caring for up to six patients at a time — far more than state-mandated staffing ratios allow, especially for patients who require intensive care and monitoring.

“People are giving all of themselves,” the worker said. “Everyone’s burnt out. They leave work crying every day.”

It isn’t the first time Alecto Healthcare has made a decision that affects the health of a community. In September 2019, the company abruptly closed Ohio Valley Medical Center in Wheeling, W.Va., despite Gov. Jim Justice’s efforts to keep it open.

In March 2020, the company again closed a hospital in West Virginia, Fairmont Regional Medical Center, with little warning. The state’s attorney general, Patrick Morrisey, is investigating the company’s business practices, his office said, and the investigation has already resulted in Alecto agreeing to pay more than $1 million in lost wages and retirement benefits to employees at the shuttered West Virginia hospitals.

But it’s not only the immediate loss of care that is of grave concern to the local community. The hospital opened in 1947 near the corner of Olympic and San Vicente boulevards and was long known as Midway Hospital. It has been a reliable standby for neighborhood healthcare, locals said, for treating sliced fingers, broken bones and other maladies.

A post about the hospital’s closure on the neighborhood-based website NextDoor drew dozens of comments bemoaning the decision, according to screenshots obtained by The Times.

“They saved my life in August of 2019,” one resident wrote of the facility.

“It has always served as an important healthcare resource for our community,” wrote another.

Several community members, including Roque Wicker of the Mid City West Community Council and Steven Rosenthal of the Greater Miracle Mile Chamber of Commerce, said the Olympia facility is going to be gutted and turned into a rehabilitation center or long-term care facility, but UCLA Health would not confirm those reports.

The loss of an emergency department and ICU, whether temporarily or for good, will have an immediate and resounding impact on the area: the population served by the hospital is primarily Black, Latino and underinsured, according to Wicker, who helps run Olympia’s outpatient wound care and hyperbaric department in addition to serving on the community council.

All are groups that have already been disproportionately affected by the pandemic.

Olympia was also closely tied to the area’s senior population, providing geriatric and orthopedic care and garnering accolades for its digestive and intestinal disease treatment.

“It’s just so concerning if they are doing anything that’s a business transaction, and not taking into consideration the pandemic and the community’s need for this hospital,” said Kari Garcia, vice president of the Miracle Mile Residential Assn., a nonprofit community group in the area.

Garcia, who works with the association’s earthquake and disaster arm, said the hospital also played a pivotal role in the area’s emergency preparedness plan.

“It unravels our Miracle Mile community and it leaves us very vulnerable,” she said of the impending closure.

Both the Miracle Mile community group and the neighborhood council said they were not consulted about the suspension of services, and that there was never any public comment period, warning or advanced communication about the change.

Representatives for Nithya Raman, the newly elected councilwoman for the district that includes the hospital, said it was the first they had heard about the suspension of patient care at Olympia.

“At a moment in which COVID-19 is surging and ICU capacity in hospitals is at zero, we agree that any reduction in overall emergency services capacity in Los Angeles is cause for concern,” said Jesse Zwick, a spokesman for Raman. Zwick said the councilwoman’s office has reached out to Olympia and to UCLA Health to discuss the matter.

Some, like Wicker, feared Olympia’s closure could create a monopoly on hospital care in the area and lead to longer wait times and higher co-pays for its historically lower-income patients.

“This is a huge blow to the community,” he said. “This is just wrong.”

The March 31 deadline posted on the door is likely not arbitrary: Hospitals in California are required to provide the public with 90 days’ notice for elimination of supplementary services, although recent laws mandate greater notice for more extensive closures.

Residents and hospital workers said they wished the company had found a better time, and a better way to deliver the message.

“The lack of information, even on a non-COVID, non-pandemic day, would still be concerning,” Garcia said, adding that many in the community, herself included, took comfort in having “Olympia down the street.”

“It’s crazy that during a pandemic, people will not have it as a resource,” she said. “Now we’re like, ‘Where do we go?’”