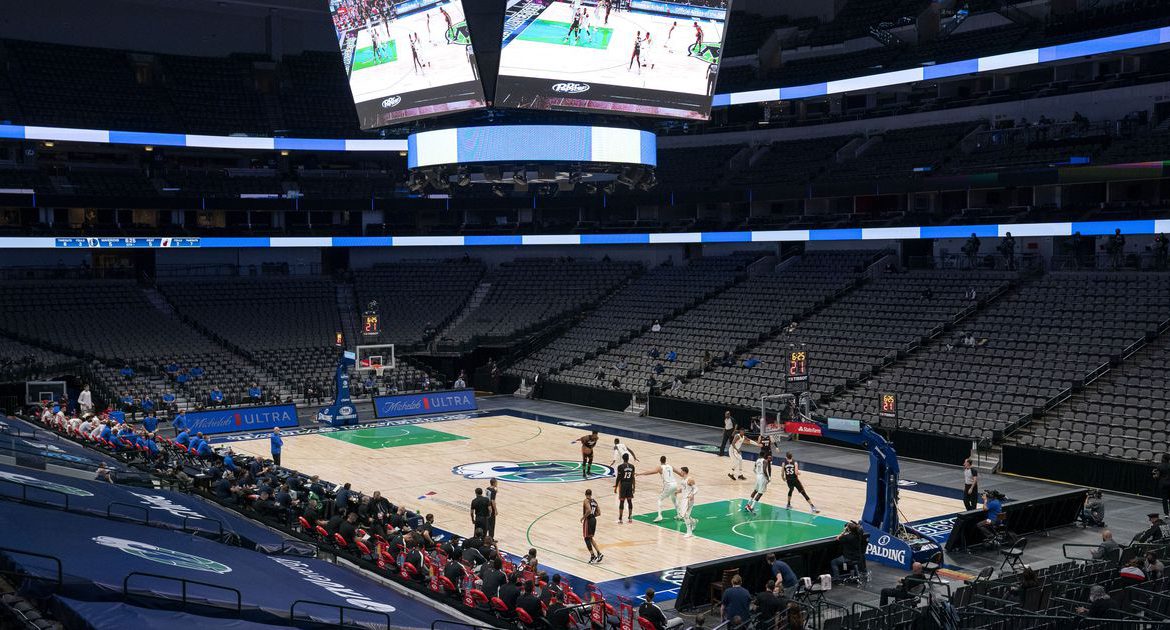 Editor’s note: This story has been updated.

The NBA’s growing wave of coronavirus-related concerns struck the Mavericks on Friday, when, according to two sources, one player tested positive for COVID-19 and two others had to be quarantined for contact tracing.

Starters Dorian Finney-Smith, Josh Richardson and key reserve Jalen Brunson are the Mavericks listed out for Saturday’s home game against Orlando due to “health and safety protocols.”

It is not clear which one of the players tested positive for the coronavirus, but all of three will miss games, perhaps a significant number.

According to NBA safety protocols, the Maverick who tested positive for COVID-19 has “two routes to return to work: Go 10 days or more after the first positive test or onset of symptoms; or test negative twice at least 24 hours apart via PCR testing.”

The other two affected Mavericks, who so far have tested negative for COVID-19, according to the sources, must quarantine for at least seven days. The 4-4 Mavericks during the next seven days play Orlando and New Orleans at home, at Charlotte and at Milwaukee.

Can confirm @ShamsCharania report that 3 Mavs had to remain in Denver. “One positive, two for safety protocols,” Mavs source says.

All three players, the sources said, remained in Denver while the rest of the players and team staff returned to Dallas on the team plane. It’s unclear when or how the three bound-in-Denver players will return to Dallas.

The NBA season began on Dec. 22 and other than Houston’s opener against Oklahoma City, games have continued interruption-free despite spiking COVID-19 case numbers across the country. In recent days, however, multiple teams have incurred virus-related problems.

On Monday it was learned that Nets star Kevin Durant faced a seven-day quarantine period due to exposure to someone who tested positive for the virus.

On Thursday it was reported that Philadelphia guard and former Maverick Seth Curry tested positive for COVID-19, and that multiple teammates will miss games due to contact tracing.

And prior to the Mavericks’ revelations on Friday, the Boston Celtics learned that center Robert Williams III tested positive for COVID-19 and that fellow frontcourt players Grant Williams and Tristan Thompson will miss time while quarantining.

Clearly, conducting a 72-game season in 30 NBA cities, even without fans in the majority of the arenas, is proving more problematic than last summer’s four-month, one-site $180 million “bubble” setup on the Disney World campus.

Before the Mavericks’ Thursday night overtime win against the Nuggets, coach Rick Carlisle discussed the difficulties of maintaining, in effect, a traveling bubble while following the 134-page health and safety protocols that were distributed to all 30 teams prior to training camps.

While asking Carlisle a question, a reporter described COVID-19 as fickle.

“Part of the medical protocols and doing 24-hour testing and rapid-testing is that if someone does test positive, there’s a period of slightly more than 24 hours where there’s an incubation period. And during that first 24 hours it’s believed that a person who contracts it is not contagious.

“The system allows for a positive test to be pulled from the group to quarantine to get another test that it was positive. For all of this to work, you have to follow the details of the daily protocols.”

“We’ve just got to stay steadfast and understand that there are no guarantees,” Carlisle said. “When you try to create a traveling bubble, which we’re doing as a league, there are certainly more variables. But the hope is that if somebody does throw a positive test out there that they can be pulled from the group and that you can kind of move forward from there.”

On Friday, that happened to a Maverick, and it resulted in two others going into quarantine. Now the Mavericks and other NBA teams will brace for whatever comes next.

Mavericks guard Trey Burke, who last summer contracted COVID-19 before later joining the Mavericks in the Disney World bubble, did not travel with the team to Denver. Carlisle said on Thursday that he did not believe Burke’s illness is coronavirus-related.

Burke is listed as questionable for Saturday’s game against the Magic. Kristaps Porzingis, who has yet to play this season while rehabbing from October knee surgery, has been declared out for the Orlando game, with the listed reason as “right knee surgery.”

Briefly: As was made clear by today’s announcement of the 18 G-League franchises that will play in a Disney World bubble starting next month, the Frisco-based Texas Legends were among the 10 G-League franchises that opted out of playing this season. … With the NBA wanting to somewhat limit the scope of the G-League season, all of which will occur within the bubble, the league in essence asked for opt-out volunteers. … Due to COVID-19 concerns and the need for roster flexibility, NBA teams are allowed to carry 17 players this season, so two-way-contract players Tyler Bey and Nate Hinton will remain with the Mavericks all season, rather than be assigned to one of the G-League bubble teams.