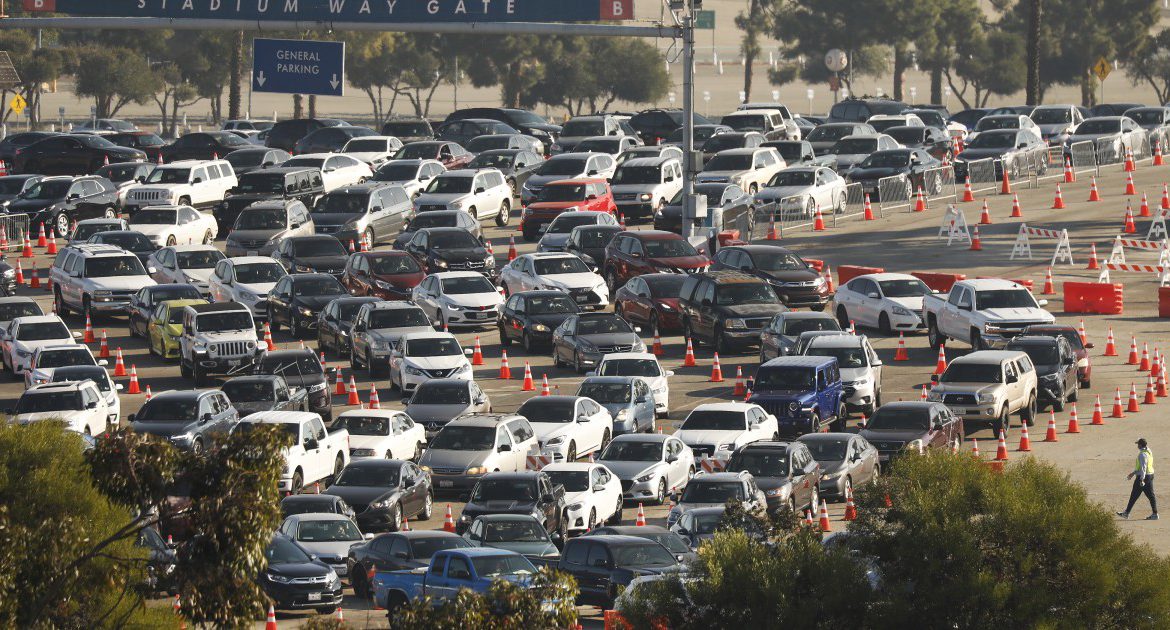 Los Angeles plans to turn its massive coronavirus testing site at Dodger Stadium into a vaccination distribution center this week, with officials hoping to vaccinate up to 12,000 people a day when the site is fully operational, city and county officials announced Sunday night.

Dodger Stadium is the largest testing site in the country, processing thousands of residents a day. The site has administered more than 1 million tests since May.

Testing operations at Dodger Stadium will end Monday, according to a release from Mayor Eric Garcetti’s office. City and county officials also plan to end testing at the Veterans Affairs Lot 15 site near Jackie Robinson Stadium to shift personnel, equipment and other resources to vaccine distribution.

“Vaccines are the surest route to defeating this virus and charting a course to recovery, so the city, county, and our entire team are putting our best resources on the field to get Angelenos vaccinated as quickly, safely, and efficiently as possible,” Garcetti said in the release.

The county’s testing capacity will be reduced temporarily during the transition at the sites, but the change will more than triple the daily number of vaccines available for Angelenos. The city plans to continue providing free testing for residents, with or without symptoms, at eight permanent sites and six mobile sites across L.A. In the coming weeks, testing will increase through existing locations, additional mobile sites and at Pierce College in Woodland Hills, the release said.

The transition toward vaccine distribution comes as California and the rest of the country have been slow to administer COVID-19 vaccines.

On Friday, Gov. Gavin Newsom set a goal of administering vaccines to 1 million additional people over the following nine days, acknowledging that the state’s effort to distribute the lifesaving supplies has been “not good enough.”

Though California has received more than 2 million doses of vaccine, as of Friday less than a third had been administered to the front-line healthcare workers and residents at nursing homes and other long-term care facilities who are eligible in the first round of inoculations.

The vaccine rollout also has been hampered by reluctance from some front-line healthcare workers to take it. Roughly 20% to 40% of L.A. County’s front-line workers who were offered the vaccine as of the end of the year declined to take it, according to county public health officials.

State officials recently broadened who can qualify for vaccination, allowing teachers, child-care workers and people over the age of 75 to be inoculated if there is a risk of doses expiring.

In L.A. County, 145,621 of the initial doses of the COVID-19 vaccine had been administered — a little more than a third of those received — as of Jan. 7, according to county public health data.

The announcement that Dodger Stadium would transition to a vaccine distribution site was first reported by KNX-AM (1070).

California also is facing a continuing surge in COVID-19 deaths. By Saturday night, the state was recording an average of 451 deaths a day for the previous week, a record. On Sunday, the state eclipsed 30,000 deaths since the pandemic began.