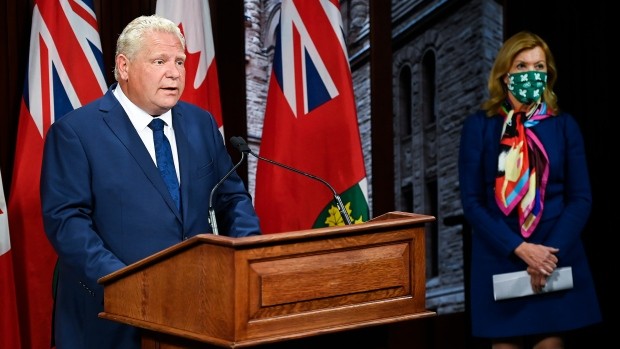 Ontario is implementing another provincewide state of emergency, extending remote-only learning for select elementary students and cracking down on retail hours as COVID-19 cases, hospitalizations and deaths reach record highs.

Premier Doug Ford made the announcement from Queen’s Park this morning and announced the additional measures to help curb transmission of the deadly disease.

As of Thursday, at 12:01 a.m., the government is issuing a stay-at-home order for at least 28 days requiring everyone to remain at home with exceptions for essential purposes.

“Under this order, everyone is going to stay home and only go out for essential trips to pick up groceries or go to medical appointments,” Ford said.

“Cases and deaths are the highest since the start of the pandemic and community spread continues to escalate. I’m not blaming anyone, only one thing is truly at fault and that’s the virus,” he added.

The order is aimed at reducing people’s mobility and reducing the number of daily contacts with people outside their immediate household.

The state of emergency gives the government the power to enact new measures beyond those included in the provincewide lockdown, which began on Dec. 26, 2020.

An emergency order allows the government to close more businesses, prohibit events and gatherings and order people to stay home.

This is the second emergency order issued in the province since the pandemic began last March. The last one expired on July 24, though many of the 47 emergency orders issued under it remain in effect.

Ford also announced that retailers will be subject to shorter operation hours and that outdoor gathering sizes will be reduced from 10 to five people, with limited exceptions.

The government is also advising non-essential workers who are currently working at their places of employment to work from home except in circumstances “where the nature of their work requires them to be on-site at the workplace.

As for non-essential retail stores, they will be required to close from 8 p.m. to 7 a.m. in an effort to discourage late night shopping.

These stores will be permitted to have all their aisles open, despite some critics suggesting aisles with non-essential items should be blocked off as it’s an unfair advantage to small businesses who were forced to close during the lockdown.

The restricted hours of operation do not apply to stores that primarily sell food, pharmacies, gas stations, convenience stores, and restaurants for takeout or delivery.

The restricted hours, however, do apply to stores offering curbside pick-up.

As for restaurants, pick-up and delivery will still be allowed throughout the lockdown.

A curfew, similar to what Quebec implemented on Saturday, will not be implemented in Ontario.

The province first declared a state of emergency on Mar. 17, 2020 which halted much of the province’s economy as non-essential businesses, schools, daycares and some healthcare services shut down.

The state of emergency officially ended in July after the government passed the Reopening Ontario Act.

The Ford government also announced that certain public health units (PHU) will not return to in-person instruction until Feb. 10.

These PHUs include Toronto, Peel Region, York, Hamilton, Windsor-Essex, which are among the hardest-hit regions across the province.

Meanwhile, students in northern Ontario returned to in-person learning on Monday due to lower case counts in those regions.

By Jan. 20, the government said the Chief Medical Officer of Health will advise the Ministry of Education on which PHUs will be allowed to resume in-person instruction, based on the latest modelling.

In addition, new health and safety measures will be implemented for in-person learning, including masking for Grade 1 to 3, mask wearing outdoors and enhanced screening protocol.